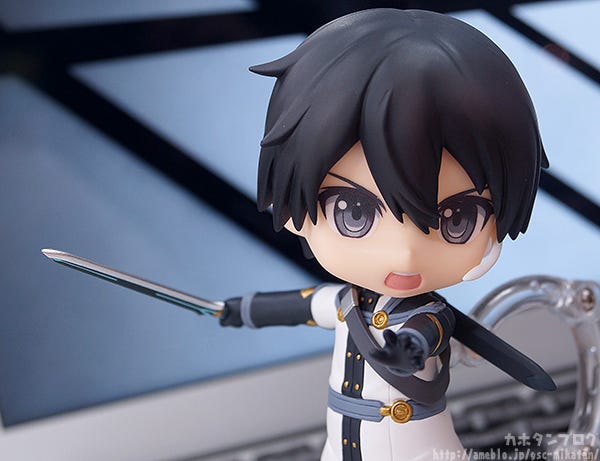 I play a lot of games, but I tend to give up before ever finishing them… I think I can count the number I’ve finished completely on one hand… From “Sword Art Online The Movie: Ordinal Scale” comes a Nendoroid of the main character, Kirito, based on his new outfit from the movie! He comes with three face plates including a standard face, a shouting face for combat poses as well as an awakened face plate to recreate the serious look at the end of the movie.

The AR-type information terminal “Augma” that plays an important role in the movie is included, as well as Kirito’s favorite sword and the large broad sword used at the end of the movie together with powerful effect parts! Recreate all sorts of epic scenes from the movie in Nendoroid size!

*The specifications of this product differ to the Kirito included in Nendoroid Kirito & Asuna: O.S Ver. set version.

From Sword Art Online The Movie: Ordinal Scale which has its Blu-ray and DVD releasing next month, comes a Nendoroid of Kirito! The gentle smiling expression really captures Kirito’s kind personality, and you can even see the AR-type information terminal “Augma” attached to his right ear! (/ω・＼)

Even in Nendoroid size all the details of his outfit including the golden bands and accessories and even his iconic shoe design have been faithfully preserved! ▲He also comes with alternate parts to display the sword sheathed!

Along with the gentle expression above, he also comes with a combat expression better suited to those more serious battle scenes! (∩・∀・)∩ He can be posed holding his sword with both hands for a more powerful strike, swinging his sword down vertically and much more thanks to the specially included arm and shoulder parts! Recreate all sorts of combat scenes in Nendoroid size! Display him in your favorite scenes from the movie!! ♡

Speaking of in the movie, another part of the Ordinal Scale world can be reproduced with the Nendoroid – the ranking system! He comes with a clear sheet showing his character name and rank which can be slipped between the two hair parts to display him showing his rank! ヽ(●´Д｀●)ﾉ ▲ Simply select the one that best suits your pose! Finally we have his third face plate: an awakened expression! ε=(｡・д・｡) The iconic look from the end of the film featuring golden eyes! The above photo makes use of the body from the original Nendoroid Kirito (sold separately) together with the Ordinal Scale versions awakened face plate, broadsword and slashing effect parts to recreate the scene as faithfully as possible! ☆ Keep your eyes on the Good Smile Company Website for more information! We also have Nendoroid Asuna: Ordinal Scale Ver. in the works, so stay tuned for updates about her as well! ♪