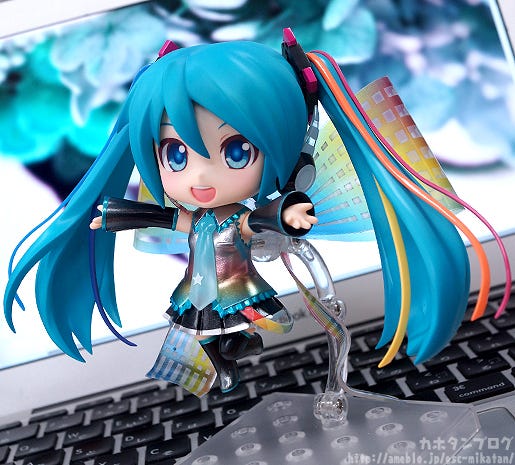 The 31st of August is Miku’s Anniversary!! Her colorful body, the iconic ribbon on her back as well as the ribbons in her hair have all been included to capture the more characteristic details of the 10th anniversary version. She comes with two face plates including a lovely smile based on the original illustration, as well as a cute winking expression for all sorts of adorable poses. Be sure to add the commemorative Nendoroid to your collection – the perfect item to celebrate Hatsune Miku’s 10th anniversary!

The 10th anniversary of Hatsune Miku! A brand new start!

The original VOCALOID2 Hatsune Miku software was released on the 31st August 2007 meaning the electronic diva has been around for a good 10 years now! This Nendoroid is based on the illustration that was drawn to commemorate the 10th anniversary and features various new details compared to the original!

First off, lets take a look at the colorful ribbon on her back! The ribbon makes use of a translucent material together with very vibrant colors which makes for such a lovely and colorful appearance! The bottom parts of the ribbon are also fitted with joints ensuring that the ribbon won’t get in the way of certain poses! Metallic with a rainbow gradient! Even in tiny Nendoroid size the outfit also features creases for a more realistic look that also shows off Miku’s sleek curves!

The headset and necktie also make use of translucent parts in order to capture the feeling of transparency from the original illustration! ☆ ▲ The ribbons in her hair have different colors on each side! ♡

Moving on to her second face plate: a winking face! The slight blush on her cheeks together with the wink and a slightly open mouth make for such an adorable face plate!! Not to mention that she also comes with hand parts that can be placed together to form a heart!! The combination of this expression together with the colorful 10th anniversary design makes for such a playful appearance!

A Nendoroid Miku to celebrate 10 years with the electronic diva!

She’ll be up for preorder tomorrow! ♥

Keep your eyes on the Good Smile Company Website for more details! There may also be a special site to celebrate the anniversary! ♪

Plus, don’t forget there is also a scale figure in the works!ヽ(●´Д｀●)ﾉ This weekend is Magical Mirai 2017!

Good Smile Company will have various Miku-related figures on display as well as various items on sale! Be sure to stop by and take a look if you’re at the event!