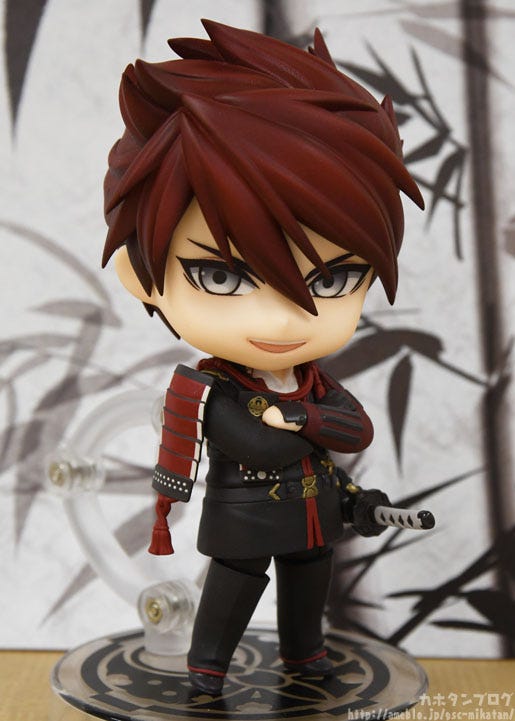 Hello everyone! Chan-shuu (@gscs_hirase) from the GSC planing team here!

Today I’m going to be taking a look at ORANGE ROUGE’s…
Nendoroid Okanehira! From the popular browser and smartphone game ‘Touken Ranbu -ONLINE-‘ comes a Nendoroid of the Bizen sword, Okanehira! He comes with three face plates including a standard face, a combat face as well as a smiling expression based on his “Naturally” line from the game. His sword can be displayed both sheathed or drawn allowing you to recreate various scenes from the game. Be sure to add him to your collection!

“There are some that say that I am in fact the most beautiful sword!”

Okanehira is a Bizen sword just like Nendoroid Uguisumaru who was also recently announced! He is also the 20th character to join the Touken Ranbu -ONLINE- Nendoroid series!! There are still many other characters in the works, so look out for more soon!! (๑•̀ㅂ•́)و✧ The sharp tips of his hair have carefully painted to have the shades match the tips making for a very faithful rendition in Nendoroid size! the grey eyes peeling out from the hair also look so clear and confident!

▼ A closer look at his outfit! The first thing I want to draw your attention to is the use of reds for the armor and cords all over the outfit that bring out such a lovely contrast with the blacks. The little golden details of the emblem and belts have also been carefully painted and make for a lovely accent! (๑•̀ㅂ•́)و✧ ▲ The sculpt of his hair from the back…! (ﾟＡﾟ;)ｺﾞｸﾘ

The figure went through various iterations to ensure that no matter what angle you chose to look from, the figure would always keep Okanehira’s shape in tact! The sword can be placed sheathed at his side like above, but can also be removed like below! ▼Let’s move on to some combat scenes! *His right arm parts were being slightly adjusted, so this photo is from the GSC site.

His second face plate is an expression more suited to combat, with sharp eyes and gritted teeth! Here is is posed with one leg out to the side and the other bent as if just about to make his next move!

▼ The shoulder armor can also be freely moved around!

▲ The armor on his right shoulder features a ball joint which allows for many more posing opportunities while wielding the sword! Here is an example of how it can be moved around! He looks ready for battle!! (ﾉﾟοﾟ)ﾉ

▼ His third face plate is a smiling expression! Just look at the confidence in that smile! He comes with folded arms to bring out that cocky look even more! ▲ You need to balance it rather carefully, but you can actually have him hold the cup like this! This matches up with all the previous figures in the series!!
Nendoroid Okanehira!

In addition, purchases from the GOODSMILE ONLINE SHOP will include this Nendoroid Plus Rubber Strap: Okanehira “Naturally” Ver. as a bonus! In addition, we also have the usual Nendoroid Pouch: Sleeping Bag (Okanehira Ver.) available fore preorder at the same time! ▲ Place your favorite Nendoroid inside and go out on journeys together!