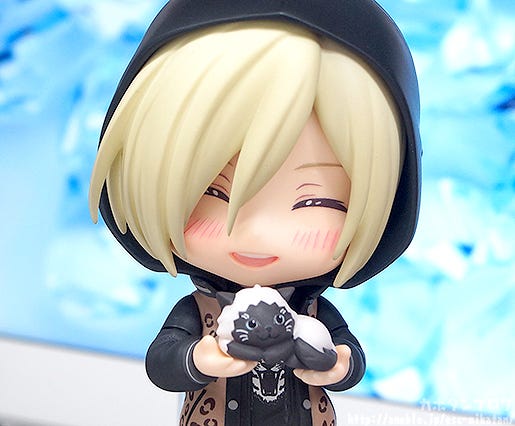 It’s nice to have something warm and fluffy during these colder days… I unfortunately don’t have a pet to snuggle up with, so I instead keep a warm and fluffy blanket by my side! From the popular anime series “YURI!!! on ICE” comes a Nendoroid of the “Russian Fairy”, Yuri Plisetsky wearing a casual outfit! He comes with two face plates including a standard sullen expression as well as the smiling face when he gave Yuri his Katsudon Pirozhki.

Optional parts include his smartphone as well as his beloved cat Potya, he also comes with an alternate lower body part to display him with his leg up in the air in a dropkick pose in order to capture the more delinquent side of his personality! Be sure to display him together with his rival Yuri Katsuki and enjoy all sorts of different situations in Nendoroid size!

“If you retire now I’ll make you regret it for life. Idiot.”

The Russian ice-skater known as the “Russian Fairy”, Yuri Plisetsky, is rejoining the Nendoroids in a more casual outfit! The outfit and his personality have all been captured on the Nendoroid in such perfect detail!! Just looking at him makes my heart skip a beat! (´□｀｡)

The hood part unfortunately can’t be removed, but instead that means that from the back the cute round form of the hood has been faithfully preserved! ♪ ▲ The pattern on his outfit also goes all the way around to the back!

This time around we have also included a special drop-kicking lower body part made in the image of the scene where he first meets Yuri! ((´д`●))三((●´д`)) This is an alternate part with the hips and right leg connected together in order to pose the leg much higher up in the air! ♪ ▲ The hands in his pockets and delinquent style have all been
captured in such a cute way for the Nendoroid! (｡･ω･)ﾉﾞ

Moving on to his second face plate… The smile he had when he gave Yuri his Katsudon Pirozhki!

Isn’t he just precious?! That cute smile, those teeth and that slight blush!!

In addition, you can easily combine this figure with parts from the previously released Nendoroid Yuri Plisetsky for even more display options! For example… This scene would look even better with Yuri Katsuki standing by his side! Be sure to display this Nendoroid together with the other previously released Nendoroids from the series and enjoy all sorts of different situations in Nendoroid size!!

Nendoroid Yuri Plisetsky: Casual Ver. also comes with his very own options parts including his beloved cat Potya as well as his smartphone! ▲ He must be taking photos for Instragram? ▲He looks so happy relaxed with his beloved kitty!

Last but not least, here are a few photos of Yurio together with some others that I thought he would like! (｀・ω・´)ゞ ▲ A two-shot selfie with Nendoroid Serval! ☆ ▲ Together with a white tiger! ☆

Be sure to enjoy your own situations once he joins your collection!

Be sure to add the adorable Russian ice-skater to your collection!
Nendoroid Yuri Plisetsky: Casual Ver.!

Plus, we also have a couple of preorder bonuses! (っ’ω’)っ)) Be sure to consider the bonuses when preordering!