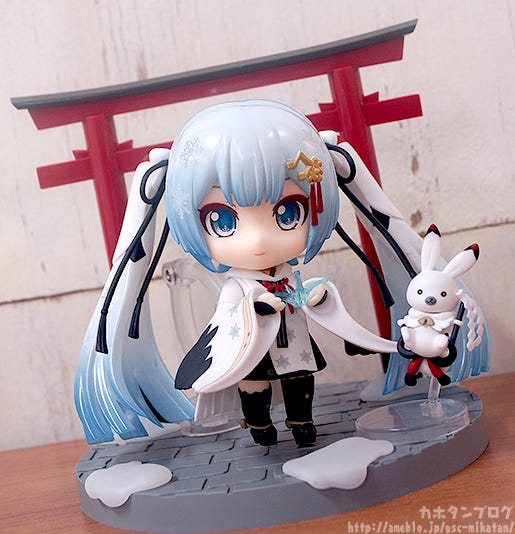 I want to change my work desk into a kotatsu! The cold weather here in Japan has been continuing for quite awhile now – I hope everyone is keeping warm! 2018 marks the 9th anniversary of Snow Miku, and the 2018 design was once again selected by fans through online votes between a selection of outfits all submitted to piapro by fans! This year the theme was “Animals of Winter Hokkaido”, and the winning Snow Miku design was this version based on a red-crowned crane illustrated by Taichadon! The illustration has now been converted into this adorable Nendoroid!

The hood can be attached and removed for a different look, and she comes with three different face plates including a standard expression, a wistful smiling face as well as a prayer face with closed eyes and a touch of lipstick. Optional parts include a kagura bell and folding fan to pose her performing traditional dances! A cypress stand to place the tools on as well as kneeling parts are also included to display her in prayer, and a crane made from ice is also included for her to hold in her hands.

In addition, a large base featuring a paved road and torii archway is also included to bring out the temple atmosphere, and she comes with a broom to display her cleaning the temple grounds! The snow on the base can even be removed for even more display opportunities! Enjoy the relaxed Snow Miku priestess in all sorts of adorable Nendoroid poses!

Snow Miku performing dance and prayer dressed as a priestess!

All of her optional parts and face plates were revealed last week together with the opening of the WonHobby site! Tori Bird has also made a video that takes a closer look at the figure!! A clear box covered in snowflakes with a special wrapping in the centre!! The red and white design with the decorative cord make for a very elegant package!

This is how the packaging looks from the back! ♪ A couple of posing examples together with an explanation about Snow Miku!

The design this time around was based on this illustration by Taichadon! The illustration also features on the back of the packaging! ε-(o´ω｀o) It’s quite a different style of packaging to standard Nendoroids! ☆

Remove the center label to reveal Miku covered in snowflakes! As you can see there are all sorts of optional parts! The blister pack comes with two different layers in order to fit them all in! ♥ ▲ The torii archway and paved road really stand out!

These two parts can be placed together to make a rather large display base like so! (*´ｪ`*) The snow parts along the edges can be removed or moved into any position you like! ♪

As she comes with a broom you can even pose her sweeping away some of the snow! (●‘∀‘●)ﾉ” As you may or may not have noticed, she also comes with a rather special round base that allows her to easily be displayed on this paved area! ☆ Using this base you can pose with in all sorts of poses without ruining the atmosphere with a full-sized Nendoroid base! As with most Miku’s you can balance the Nendoroid on her hair, but I would recommend you make use of the base both to keep your figure safe as well as have a more dynamic and stable pose!(∩・∀・)∩

The sleeves of her outfit are based on the appearance of a red-crowned crane, the Hokkaido animal that this design was based around! ☆ As usual, Rabbit Yukine is also included to be posed together with her! Note the iconic coloring of his ears… … and the rather warm looking cape he is wearing!

He also comes with an alternate sitting body for different poses! Miku herself also comes with many more other parts that bring out the “priestess” side of her design, including a cypress stand, kagura bell and folding fan! The bell has real ribbons tied along the end for all sorts of posing options! Obviously it’s not really made from ice, but makes use of a translucent material to capture that icy appearance! Even though it is even smaller than Rabbit Yukine, the attention to detail is lovely! ♪ You can even pose Snow Miku holding the crane like this! Simply find the pose that you think suits her the best!!

Be sure to add the 2018 Snow Miku to your collection!
Nendoroid Snow Miku: Crane Priestess Ver.!☆

This item will be available in the following ways:

Finally, Hamako (@gsc_hama) took some lovely outdoor photos so I thought I would share one of them on the blog!★ A mystical photo of Miku enjoying the snow! (´□｀｡)

I think I should get out and do some more outdoor photography too! ♪