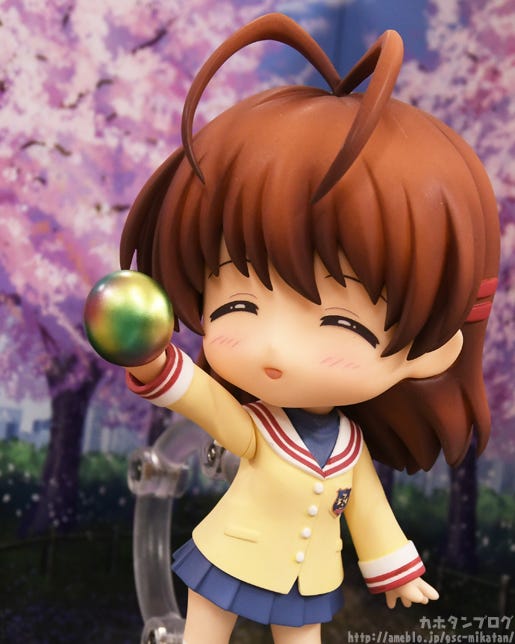 Hello everyone! Chan-shuu (@gscs_hirase) from the GSC planning team here!

The original Japanese version of this blog was released on Nagisa’s birthday, the 24th December 2017! The translated version is a little late, but… Today I’m going to take a closer look at the Nendoroid in celebration!!! From the masterpiece romance visual novel “CLANNAD” comes a Nendoroid of the main heroine, Nagisa Furukawa! She comes with three face plates including a gentle standard expression, a bashful embarrassed expression and a heart-warming smile.

Optional parts include the green dango from the great dango family as well as some anpan and the amazing rainbow bread from her family’s bakery! Recreate your favorite scenes from the game and enjoy the adorable Nagisa by your side whenever you like!

“If it’s possible… I’d like to remake the Drama Club.”

From perhaps the most well-known of all the games made by Key, “CLANNAD”, comes a Nendoroid of the heroine, Nagisa Furukawa!! Ever since I joined Good Smile Company many years back I’ve always hoped I’d one day get the chance to create a Nendoroid of Nagisa… I’m so happy that the day has finally come!! ★

▼This is how she looks from the back! ▲Note the slight waving look of her hair!

The slight wavy look in her hair is actually included in the sculpt to capture her original standing illustration from the game as faithfully as possible! If you look close you’ll also see the red hairpin at the side! ▲…together with a slightly bashful expression!

Her eyebrows are bent slightly downward look but her eyes have a bit of an upward gaze for a very adorable look! Her unique hairstyle has also been faithfully captured, and the sticking-up parts of her hair are attached with a joint allowing them to be moved around for different nuances!

▼Onto her optional parts! Note the detail of the anpan, including the packet it is in as well as the little poppy seeds sprinkled on top!

▼She also comes with Rainbow Bread! ▲A Rainbow for you!

The mysterious bread baked by Nagisa’s mother Sanae is included with the Nendoroid!! The bread makes use of a metallic green base with multiple layers of different colors on top to recreate the rainbow effect! Note that the rainbow effect may differ slightly on each product, but we will do our best to keep them as faithful to the prototype as possible! (๑•̀ㅂ•́)و✧ ▲ She also comes with special hand parts to hold her bag with two hands!

This pose is intended to recreate the opening theme scene from the second season of the anime! She only appeared like this for a second in the opening theme, but the pose was so iconic to me that I simply had to include it as a part of the Nendoroid! ▲“The place that will make your wishes come true…”

This right arm and hand part are included as separate parts to recreate the pose where she invites the main character with her!

▼ Plus one item that always comes to mind with Nagisa.. . This green version is included with the Nendoroid to display with her!

▼She also comes with hands to hold it! The cute round form and eyes are so simple and yet so cute! (*´ー｀*)

You might think that it’s not much of a “Great” family when there is only one dango, but I have some good news for you! Orders from the GOODSMILE ONLINE SHOP will also include a red and yellow dango as well!! This allows for a much larger family of dango to display with her! Be sure to consider it when preordering! (๑•̀ㅂ•́)و✧

▼ As a side note, the underside of the dango… This means that you can display the dango piled up on top of each other!! ♪

You can preorder from the GOODSMILE ONLINE SHOP here:
http://goodsmileshop.com/en/p/GSC_NEN_WD_00869/

As a side note, the background I used for most of the photos above… Is this Dioramansion 150: Cherry Blossom Road from PLM! It is also currently up for preorder, so if you are looking for a nice background for displays or photography I highly recommend it! (๑•̀ㅂ•́)و✧