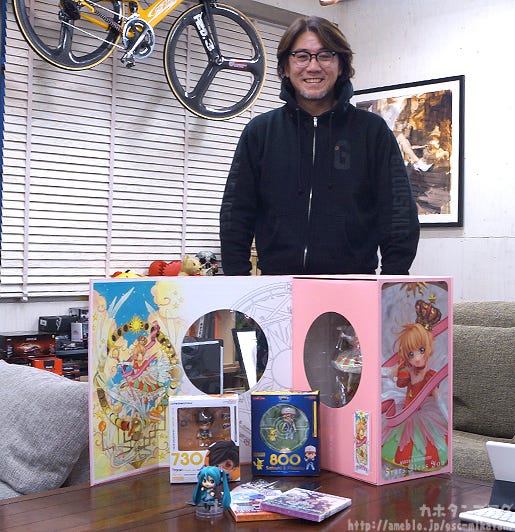 This is the final blog of the year!!

As with most years, I have decided to interview the Good Smile Company CEO, Aki-san, as a final bit of closure for the year! (∩・∀・)∩ Time has just flown by, and yet there were so many things going on that the Winter Wonder Festival feels like it was around five years ago. We ran the “Good Smile Clinic” for the first time, announced all sorts of new figure projects and much more, making a nice start to the year.
We also had just started the Grand Summoner’s game… which admittedly had a lot of trouble at the start and taught us some valuable lessons about how to manage and run a game like that. It was very interesting to be dealing with the players of the game as well as the team running things as we strived to improve the game. It’s already so nostalgic to me!

Yep! As it was a new challenge for us there were all new things to worry about and deal with – the same goes for all the new figure and anime projects we are currently working on, but it really made me realize how important it is to sometimes sit down and concentrate on a project. Replay the game over and over and fix anything that doesn’t feel right and keep working at it until we can please the fans as best possible; no matter how many tries it may take…

( ｶωｶ)ﾉﾞ You also seemed to be going on a lot of overseas trips this year!

I took part in a lot of overseas events and really got the feel that the overseas market is expanding this year. A lot of the things that are popular in Japan now become popular with fandoms overseas at almost exactly the same time. I also once again realized that we really do have fans all over the world, which is such a wonderful feeling. In the past I’ve often just felt that being at the event and being told “thanks for coming” was enough, but it’s got to the point that we need to start treating our overseas fans with more care, and catering to their requests and wants as a separate section.

( ｶωｶ)ﾉﾞ The popular OVERWATCH series is a good example of that! Yep. We are very grateful to be able to work with popular series such as this and reach a whole new market with our figures. This also opens up a lot of new options for companies related to us such as USP (Ultra Super Pictures) and more. I feel that this the start of the year featured a lot of thinking and decision making that led to more opportunities toward the end of the year and even further into the future If Max Factory had never existed, Good Smile Company may never have even entered the hobby world. We actually entered the industry as a kind of support to them, and before we knew it GSC had become a company that completed focused on figures and the hobby world. Thinking back on it all is actually a really emotional thing to me. I can hardly believe that GSC has been around for 16 years now.

( ｶωｶ)ﾉﾞ Moving on, we had the Air Race! To think that the only Japanese pilot would come in first place in not only the home race, but the entire championship made for a very exciting season!! The event was packed with fans that had a very special energy that really built up to his victory! While it hasn’t yet been decided if the event will take place in Japan next year I personally would love to see it come back every year. This was a very different challenge for us, and it takes a lot of hard work, but seeing everyone enjoy themselves at the event is always worth it.

（ ｶωｶ)ﾉﾞ Into July! WonFes! But… I believe you were at a race overseas at the time!

That’s right. I missed out on the Summer WonFes to attend the Spa 24 Hours race where we really felt the pressure of the overseas teams!! That said, GSC announced many interesting new projects at Summer WonFes! ( ｶωｶ)ﾉﾞ The Nendoroid dolls are one way to customize Nendoroids, but we also started a rather interesting service earlier this year as well!

The Nendoroid Face Maker! Nendoroids have always had the ability to swap faces between characters, but we wanted someway to allow fans even more options when customizing their Nendoroids. Thus this project was born! We really went a little too far with this one! But the company has built an environment that allows everyone to try out new challenges like this one – we’ll have to wait and see how it pans out!

( ｶωｶ)ﾉﾞ huke’s collaboration with Masaki Apsy on a new plastic model project is also another project to look forward to!

huke x Apsy x GSC. A connection between figures and plastic models that honestly will be a very interesting project! I’m not sure if it will be more popular with figure fans or plastic model fans, but we’ll have to see! This has been a very fun item from conception all the way to where we are now. I can’t wait to reveal more info to everyone! We’ve been releasing 10 years of Miku figures and even now they remain as popular as ever. This new 10th anniversary figure was made with the utmost figure to show our thanks to the virtual idol! The sculpt work really is on an incredible level, and I wish more people could take a look at the figure in person! The way each and every one of the strands of her hair have been put together… it’s something that should be so common for me to see, but this figure is just something else! Looking at it makes me think it looks more like a CG model than a figure.

( ｶωｶ)ﾉﾞ I also thought it felt very different when taking pictures for the blog!

Personally when looking at figures, the things that I feel are most important are a clean sculpt, accuracy and reproducibility. While I know there are many countries make figures with amazing details when sculpting, but I feel Japan is the forerunner when making and mass producing them and I feel that this particular figure is a perfect example of that. Thankfully we also have lots of people at GSC that take these sculpts and then make sure they move onto the next step in just as high quality.

An example that comes to mind is the recent figure of Shiro. I remember looking at the prototype and thinking the amount of detail was almost too high for mass production…

But when the sample came in from the factory, it was almost identical to the prototype. I was stunned. The factory even commented that if they receive something with such precise detail then they have to work equally hard to put out the same quality!

( ｶωｶ)ﾉﾞ Into the Winter! The final face for the GSR team!

Thanks to everyone’s support, we managed to take the champion title for the first time in three years! This year was the AMG 50th anniversary, Yokohama Tires 100th anniversary and Miku’s 10th anniversary, so it was the perfect memorial year to make a victory! We have also already announced the new Racing Miku design for 2018, illustrated by Hiro Kanzaki! ( ｶωｶ)ﾉﾞ Anyway, let’s step away from work for a bit. Is there anything else you were interested in this year?

Hmm… just the other day you may have seen there was a Kizuna Ai YouTube Video that I featured in. Ever since then I’ve been quite interested in looking at various YouTuber’s videos. The way they edit the talks and bring out that “YouTuber” feel almost makes it feel like there are unwritten rules to making videos on YouTube now, which is quite interesting. After watching a couple of different YouTubers I think I’ve started to understand why people become so addicted to watching these videos.
Also, I really enjoyed the Little Witch Academia anime series! To think that the series started as a single short film at Anime Mirai and managed to come all the way to become a full animated series. It has a very special place in my heart, and it has only come this far thanks to the support from all the fans! ▲ Nendoroid Lotte Yanson is currently up for preorder! ☆

Plus we have finally started getting things going with the second season of Thunderbolt Fantasy over in Taiwan. There was also a special movie edition that was in some theatres near the end of the year. I really am excited to see where the series goes from here on out. I want to make myself useful to hobby and anime fans all over the world!

Up until now we have always had our hands full planning items with mostly aimed at Japan, but we have managed to build up an environment that can start catering to more now. There are many opportunities for fans all around the world to see our products and learn about figures, and I think it’s an important time for us to start looking at the overseas market together with the Japanese market.

For example, there are some items that cannot be sold by us in Japan due to licensing issues but we can sell exclusively to overseas markets, and there are also certain series that have a lot more popularity in the West that we need to look into more – simply put, we need to start planning products aimed at overseas markets.

I know there are lots of fans of all sorts of different series out there, and I want to present our figures to those fans in a way that they can be satisfied and proud to own items from their favorite series, no matter if they are in Japan or in any other country in the world. That is how I want to be useful to the fans.

I hope to see you all on the blog again in the New Year!!!