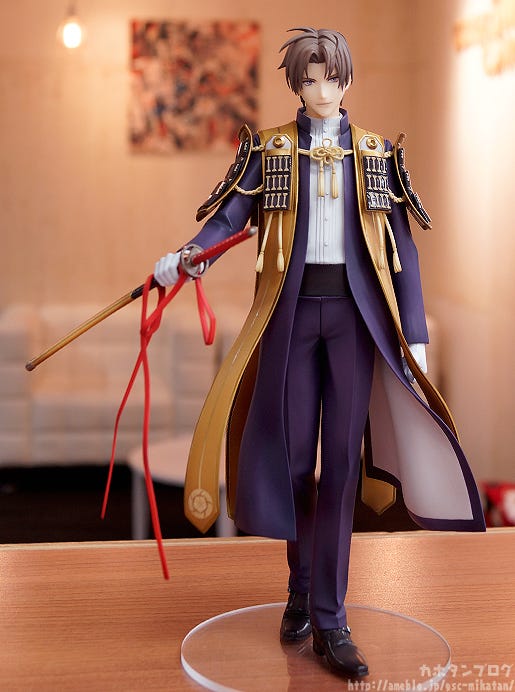 From the popular browser and smartphone game ‘Touken Ranbu -ONLINE-‘ comes a 1/8th scale figure of Heshikiri Hasebe based on his standard standing illustration from the game! While he has gentle smile on his face he still retains a calm and composed look, and his deep purple western-style outfit has been faithfully preserved down to the finest of details. The figure is overflowing with charm and will be proud stand by your side, so be sure to add him to your collection!

“Leave it to me. I shall provide only the best possible results.”

The sword who is loyal to his master and will obey any order without hesitation: Heshikiri Hasebe is joining the 1/8th scale Touken Ranbu -ONLINE- figures! His painted prototype was revealed at the last Wonder Festival, but he is now finally come to the point where preorders are just around the corner!

Since WonFes the sculpt and paintwork have been even more refined to bring out his cool and composed appearance beautifully on the figure!! (｡･ω･)ﾉﾞ Heshikiri Hasebe’s characteristic outfit and accessories have all been faithfully transformed into figure form. That deep royal purple makes him look so stunning! ▲ The outfit fits him so nicely! It makes him look so ascetic!

The pose is based on  his standard illustration from the game and captures that calm, composed and perhaps somewhat stoic appearance together with a nice dynamic feeling that really makes it seem like he is walking forward! It’s quite hard to put into words, but even though the sculpt captures the soft flow of the fabric as it billows around him, the heavy pull down of the overcoat has also been captured so nicely!

The sculptor this time around was Kohirou! Amazing work that captures the outfit, armor and sword perfectly… This goes for all of the Touken Ranbu scale figures so far, but there really is something so special about them that makes them really stand out and bring about their own atmosphere even as a figure! It really feels like Heshikiri Hasebe is right beside you!! It’s just a figure but it’s as if he could be breathing… there is something about him that makes him look so alive!

Also note the thick appearance of his gloves! ♪ Be sure to take a nice close look at each of his little fingers once he joins your collection! ヽ(●´Д｀●)ﾉ

Next let’s take a look at his shoes!! The way his pants slightly cover the top of the shoes with creases where the shoes match up also show the careful attention to detail! ★

Time for a closer look at his face!! Those eyes capture his loyalty and the line from that I started with the blog with so well: “Leave it to me. I shall provide only the best possible results.” The expression not only makes him look determined and loyal, but the fact that it is also a smile captures his more gentle demeanour as well! I would be so happy to be Heshikiri’s master and have this confident smile to cheer me on each and every day!!

There is still a lot more I want to say, but I’m going to have to leave it at this for now!

I will be taking a much closer look at the figure together with his head planner next week on a love broadcast, so I do hope everyone will tune in to get a closer look!! He’ll be up for preorder from the 22nd March!

Be sure to check the Good Smile Company or Orange Rouge websites for more details once he is up for preorder! ♪

In addition, purchases from the GOODSMILE ONLINE SHOP will include a Heshikiri Hasebe Sword Charm as a bonus!! ▲ A little size comparison with his Nendoroid!