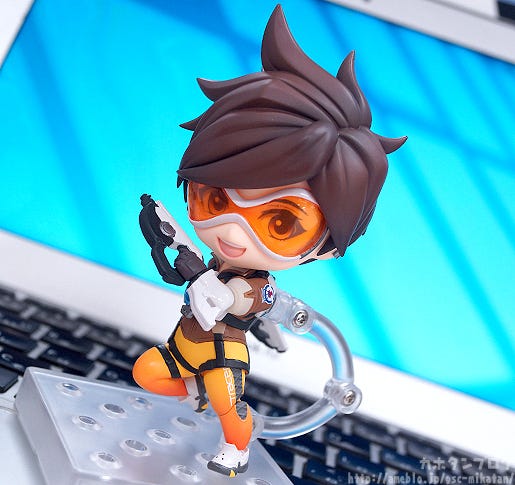 It’s starting to warm up here in Japan but it’s still rather chilly for this time of year! I hope the cherry blossoms bloom soon! From the globally popular multiplayer first-person shooter ‘Overwatch’ comes a Nendoroid of Tracer! The Nendoroid comes complete with a variety of optional parts to add effects for her abilities, interchangeable bent legs, and hair options that can cover up her eyes to recreate her iconic poses from the game!

Also included are Tracer’s trademark pulse pistols, along with open hand parts to pose her as without her guns, like when she activates her recall ability. Equip her pulse bomb to pose Tracer activating her ultimate ability! The Nendoroid is fully articulated, allowing her to be posed in many different ways, and has been carefully sculpted and tuned to ensure that the joints do not stand out, keeping Tracer’s unique appearance in tact. Be sure to add the first of the Overwatch Nendoroid series to your collection!

From the multiplayer first-person shooter that has become popular all over the world ‘Overwatch’ comes the first Nendoroid from the series: Tracer!!

When she was announced back in February it was quite the surprise announcement, so I’m sure many fans were quite excited!! (；・`ω・´)

From her trademark orange-tinted goggles to the slightly boyish hair style with its soft and bouncy appearance on top have all been faithfully converted into Nendoroid size! ♪

The details on her outfit have also been carefully sculpted, including the unique open collar area as well as her rolled-up sleeves! There are so many aspects that make her so unique as a Nendoroid! The difference in textures between the various parts of the figure are reproduced with glossy and matte paints to bring out the shine on certain areas! ☆

Another thing to note is that Nendoroid Tracer is a fully articulated Nendoroid with flexible joints in her elbows, knees and more allowing for all sorts of posing opportunities! ヽ(ﾟ∀ﾟヽ 三 ﾉﾟ∀ﾟ)ﾉ Perhaps the best thing about this is that even though she is so highly articulated she has also been very carefully sculpted and tuned to ensure that the joints do not stand out but still keep her unique appearance in tact! Nendoroid Tracer comes with both the lovely innocent smiling face you can see above, while the second is a more relaxed smile which you can see below! You may have also noticed there are holes on her hands in the photo above – this is in fact so that you can pose her with her hands open while still holding her pulse pistols as if she had just activated her recall ability!!
On that note, she also of course comes complete with her Pulse Pistols! Not only that, but her Pulse Bomb ultimate is also included for even more fun!! ▲ Simply move her around and find a pose you like!

She also comes with effect parts to recreate her blink ability which are not shown in my photos, but you can find them on the official product page!

You can pose her blowing her hair out of her eyes like she does in her heroic highlight intro! The face plate with her mouth in a blowing position is also included! ♥

The sculpt of her lips is quite different to most Nendoroids – it has a more defined appearance to better suit the original design! (●‘∀‘●)ﾉ” ▲ The eyes are made to look up at her hair giving her a rather cute upward glance! (∩・∀・)∩

We also made a quick promotional video to show her off from a few more angles, so be sure to take a look!

Whether you want to enjoy her as an action figure or simply display her in your collection as a lovely rendition of Tracer, be sure you don’t miss out on the first of the Overwatch Nendoroids! ★
Nendoroid Tracer: Classic Skin Edition! Orders from the GOODSMILE ONLINE SHOP are open until the 20th April 2017 (Thu) at 12:00JST! She is also available from our partner shops as well as the Blizzard Gear official store! Make sure you don’t miss out! (｡･ω･)ﾉﾞ