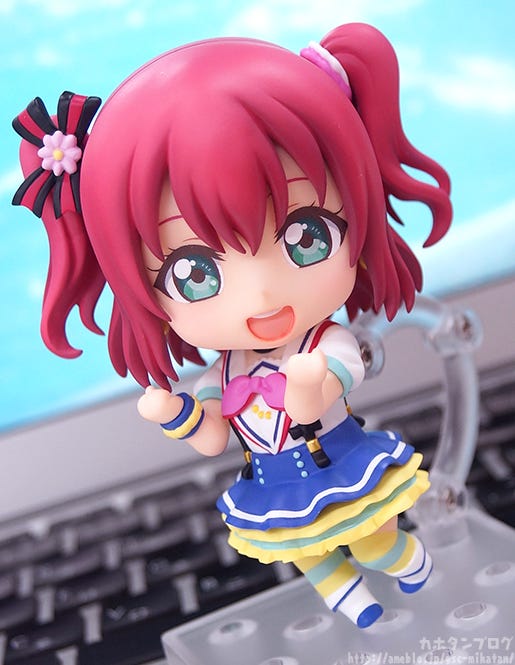 I always mess up what day of the week it is after a long weekend! It doesn’t feel like Tuesday today at all! Anyway, today I’m going to be taking a look at… From the anime series ‘LoveLive!Sunshine!!’ comes a Nendoroid of the Aqours member Ruby Kurosawa wearing her outfit from the song ‘Aozora Jumping Heart’! She comes with both a sparkling smile as well as a troubled expression.

The honest and sincere Aqours member who is always determined to be a better idol… even if she might be a bit of a crybaby at times! Ruby Kurosawa is joining the Nendoroids! ♥ That innocent, sparkling facial expression, the little twin-tails as well as the cute hair accessories that hold them in place have all been faithfully converted into Nendoroid size!

Ruby is the sixth Nendoroid to join the LoveLive! Sunshine!! Nendoroid Aquors series! The members that have already been up for preorder are as follows: The last three members are also in production, so you can look forward to completing the Aquors Nendoroid set!! ヽ(ﾟ∀ﾟヽ 三 ﾉﾟ∀ﾟ)ﾉ

But anyway, let’s get back to Ruby!! ♪ Just like the previous characters, Ruby is wearing her stage outfit from the song “Aozora Jumping Heart”! The frills of her skirt as well as the details on the sailor-style outfit have all been not just painted, but sculpted onto the design for a more faithful rendition in figure form! ♥ The clasps on her suspenders make use of a metallic paint to capture the texture nicely! ☆ ▲ So much detail on a figure that stands just 100mm in height!

Along with the innocent and cheerful smiling face above, she also comes with a second face plate with a troubled expression! ヽ(●´Д｀●)ﾉ ▲ The upward gaze combined with the worried eyebrows!!
You can’t help but want to just to her side and protect her!!

She comes with various hand parts as well which allow for poses such as the above pose of her pushing her skirt down, or instead pose her with her hands clenched up toward her face for a different adorable pose! The various arms and leg parts also allow you to recreate a couple of scenes from the opening theme, but also allow for lots of original poses! (*´ｪ`*)

Be sure to add the adorable little Ruby to your collection!
Nendoroid Ruby Kurosawa! The following product is available for order from the GOODSMILE ONLINE SHOP! Stock is however limited, so order quickly to avoid disappointment! The details of the tank have been carefully preserved while shrinking the tank down to cute Nendoroid Petite size, the various hatches on the top of the tank as well as the periscope guard can be opened and closed! Be sure to display the tank together with the Nendoroid Petite: Girls und Panzer series!

“No strategy created by Katyusha will ever fail!”

This product will only be available at the GOODSMILE ONLINE SHOP in limited quantity! Don’t miss out!ヽ(ﾟ◇ﾟ )ﾉ