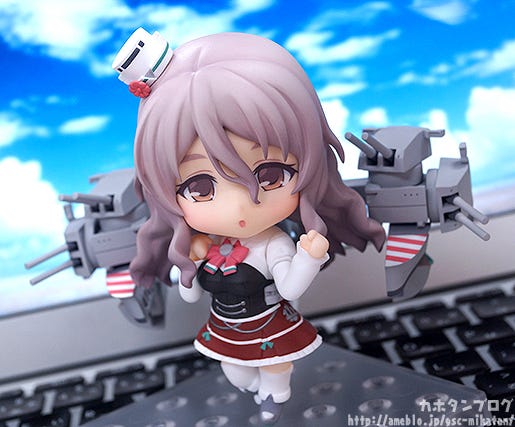 They say that people come to like beer as they get older, but I still don’t like it very much. I wonder if I will ever awaken to its hidden deliciousness…!

Anyway, today I’m going to be taking a look at…
Nendoroid Pola! From the popular browser game ‘Kantai Collection -KanColle-‘ comes a Nendoroid of the third Zara-Class heavy cruiser – Pola! The unique ship parts of the Italian ship have been faithfully converted into Nendoroid size and feature a high degree of articulation for all sorts of poses. Firing effect parts for her turrets are also included to display the heavy cruiser in combat!

Pola is known for her love of alcohol, and thus her optional parts include a bar counter with three wine bottles as well as a wine glass and some pasta to really suit Pola. She also comes with both a tipsy expression as well as a dead drunk expression allowing you to display her in various different stages of inebriation. Enjoy the taste of a victory drink with Nendoroid Pola by your side!

The Italian heavy cruiser with amazing armor and defensive capabilities, Pola is joining the adorable Nendoroid series! The stand of hair between her eyes that covers up her forehead, heavily armored chest area and elegant frills and ribbons on her outfit have all been carefully converted into Nendoroid size!  ♥ ▲ Even the shape of her hand is based on the illustration!

Another thing to note is that Pola’s outfit isn’t just a normal blouse… the area underneath her arms is actually opened up and reveals a little extra bit of skin – which is of course faithfully included on the Nendoroid design!! (/ω＼) From the front you can hardly see this opening, but from the sides you definitely get a nice little peek at her flank! ♪

As usual her ship parts are also highly articulated and the turrets can be moved up and down allowing for all sorts of different posing options! Firing effect parts for the turrets are also included to better recreate combat scenes! ★ Not only that, but her second expression is… A cute blush on her cheeks and blank eyes! ♥

You can just imagine her calling out to you with an “Admiral, everything feels so happy…” or one of her other similar lines from the game! Plus as you may have noticed you can adjust the ship parts on the back in all sorts of different ways!! ヽ(ﾟ∀ﾟヽ 三 ﾉﾟ∀ﾟ)ﾉ

There are little jointed parts all over for more options, and the one side of the ship parts can all be moved and  connected onto the other side for quite a change in appearance! （´-`）.｡oO（It reminded me of some kind of transforming robot while I was taking photos!)

“Aren’t you going to drink, Admiral?“ A drunk expression for a level past tipsiness! The fact that she has a wine glass and bottle in hand just completes the pose! It even looks a bit like she is staggering around! ♡

Last but not least, she also comes with a bar counter filled with more to drink and a little meal to eat! ヽ(*´∀｀)ノ Nothing says ‘Italy’ more than a delicious pasta dish and a selection of wine bottles! ♪

A banquet for the fleet! ▲ The power of alcohol comes out on this face! ♡

Her expressions and ship parts alone are absolutely amazing, but in addition all the little accessories allow for an endless number of possible situations to enjoy! Plus as usual, purchases from the GOODSMILE ONLINE SHOP will include a ‘Nendoroid Pola’ Special Box Sleeve & Special Nendoroid Base as a bonus! The items above all have preorders at the GOODSMILE ONLINE SHOP closing on the 26th January 2017 at 12:00JST! Make sure you don’t miss out!! There are also some items with exclusive purchase bonuses! (･∀･)/