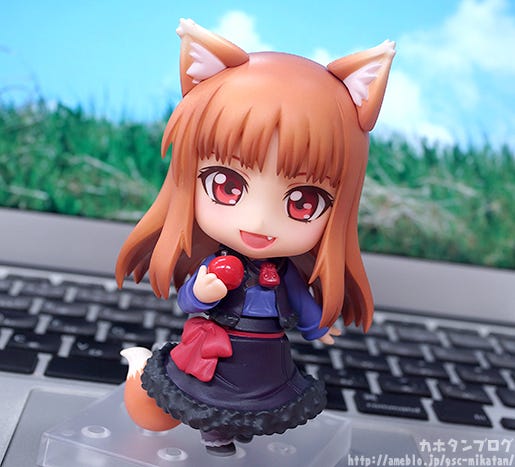 I like to warm up apples before eating them! I can eat way more once they are warmer! Even better if you sprinkle them with cinnamon! (●´ㅂ`●) *nom*

Anyway, today I’m going to be taking a look at the much anticipated…
Nendoroid Holo! Thanks to everyone’s votes in the Nendoroid 10th Anniversary Next Nendoroid Survey, Holo from the ‘Spice and Wolf’ series is joining the Nendoroids! She comes with three face plates including a smiling expression, a teasing expression as well as a tipsy expression for when she has had too much to drink!

Other optional parts include an apple as her food of choice, a wooden cup of wine and the option to switch between her ears or her hat allowing for various different display options! The Spice and Wolf series has reached its 10th anniversary just like the Nendoroid series, so be sure to add this commemorative item to your collection to celebrate both anniversaries!

Holo The Wise Wolf is joining the Nendoroids!

From the series that has been loved by fans for many years ‘Spice and Wolf’ comes an adorable Nendoroid of Holo! Those lovely red eyes, long brown hair, bushy tail and cute fox ears!! Not to mention her lovely outfit and the little charm at her chest all sculpted in lovely detail!!

Her ears even feature little ball joints to move them left and right for different nuances! ♡

Everything that makes Holo has been shrunk down and converted into adorable Nendoroid size while still keeping all the important details that make her such an amazing character! ♪

This was actually one of the figures that was created as a part of the Nendoroid 10th Anniversary Next Nendoroid Survey! Holo in particular received a lot of votes from overseas, so I hope that everyone who wanted her is happy with how she has come out!! (∩・∀・)∩ ▲ Some of the other winners are still in production!

In the photo above it was hidden behind her body, but from the back you can see that the decorative red part of her outfit around her hips as also been faithfully included on the Nendoroid design! ヽ(ﾟ∀ﾟヽ 三 ﾉﾟ∀ﾟ)ﾉ Both the red decoration and her tail are fitted with ball joints for various posing opportunities! ☆

Plus as you can see she also comes with her hat to keep her ears hidden away! ♪ ▲ You can just imagine her running through a field of wheat! ♪

By the way, the tail also features a joint midway along allowing you to rotate it like so! ♡

▲ You can easily match the tail to suit your pose!

Moving on to her second face plate… She suddenly looks like she is plotting something rather cruel!! I can just picture Lawrence standing beside her with a troubled look on his face as Holo teases him!

Even with an expression like this she is too cute to hate! ♥ ▲ The slight grin of her mouth says it all!

This expression can be used for all sorts of situations! (/ω＼) ▲Displayed together with a full-size apple! ☆

Anyway, moving on to her third expression – it works rather nicely together with the included wooden tankard filled with grape wine… (By complete coincidence this is the second blog in a row to have a tipsy expression!)

This expression really makes her look like she has let her guard down! I just want to forget everything and spoil her! (I think I may have a weakness for tipsy girls…) It looks like a rather shy expression here! ( ･ㅂ･)و ̑̑

Be sure to add the adorable Wise Wolf to your collection!
Nendoroid Holo!

In addition, orders from the GOODSMILE ONLINE SHOP will also include this Lumione Gold Coin as a bonus! (●´Д｀人´Д｀●) ▼▲ Both sides of the coin have been faithfully reproduced! Please note the Lumione Gold Coin is unfortunately not made of gold!  It does however feature a metallic paint to really bring out the golden appearance!!