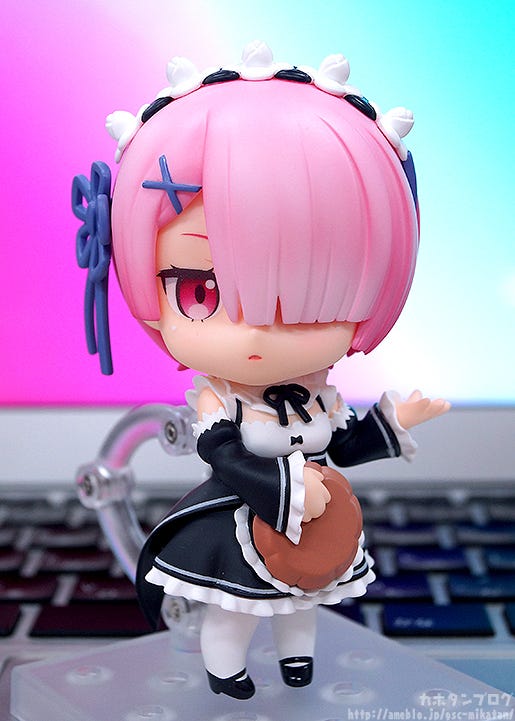 My motto when peeling vegetables or fruits is ‘carefully yet boldly’! This allows me to make excuses for both under peeling and over peeling!

Anyway, today I’m going to be taking a look at…
Nendoroid Ram! From the anime series ‘Re:ZERO -Starting Life in Another World-‘ comes a Nendoroid of Ram, one of the maids at the Roswaal mansion with her cute maid uniform has faithfully converted into Nendoroid size!

She comes with three face plates including a standard expressionless face, a smiling face for poses together with Rem as well as a shouting face to use together with her wind magic effect parts to pose her in combat. She also includes a potato and a knife to display her performing one of the few jobs she performs in the mansion. Special holding hand parts to place her in a joint pose with Nendoroid Rem are also included, so be sure to display the two of them together!

“I also believe my sincerity is one of my best virtues.”

The older of the twin maids at the Roswaal mansion that is less skilled at cooking, laundry, sewing and cleaning – Ram is joining the adorable series of Nendoroid figures!

The detailed frills on her cute maid outfit, lovely pink hair and rather small chest in comparison to her younger sister have all been faithfully captured in Nendoroid size! The tailcoat-like design on the back of her outfit, the crossing shoulder straps, ruff around her neck and the way the sleeves open out at the hands… there are so many lovely details to enjoy!! ヽ(ﾟ∀ﾟヽ 三 ﾉﾟ∀ﾟ)ﾉ

Her standard expression has a cold look that looks ready to say something rather cruel! ▲Placed with hands together in a rather elegant pose! ♪

If you look closely you can just see her lower eyelashes sticking out from beneath the long pink hair that covers up her face!

She also comes with both a potato and a knife as optional parts! ε=(｡・д・｡) This allows you to display her performing the one of the few tasks that were left to her in the mansion – peeling the potatoes! If you pose the smiling Rem beside her it looks a bit like Rem is cheering her older sister on! ♡

But there are still more parts to come… She also comes with a determined shouting expression as well as wind magic effect parts which allow you to display her in combat scenes! ☆

Three wind effect parts each with their own little stands are included allowing for all sorts of dynamic poses! She also comes with special holding hand parts for use with Nendoroid Rem!

In addition to the hand parts, she also comes with a lovely smiling face which works great for poses together with Rem! Be sure to display the two twins together!!  *｡(●´Д｀人´Д｀●)｡* ﾟ

Add the older of the Roswaal mansion twins to your collection!
Nendoroid Ram!

She’ll be up for preorder from the 26th January!! ♥

Plus Nendoroid Rem is shipping out on the 25th January! You can find my blog review here!

Today’s GSC Lab blog takes a look at a product sample of Nendoroid Rem, so be sure to take a look if you’re interested! The blog is unfortunately only available in Japanese! Just one of them is amazing, but as twins having
them both together is more than twice the fun!