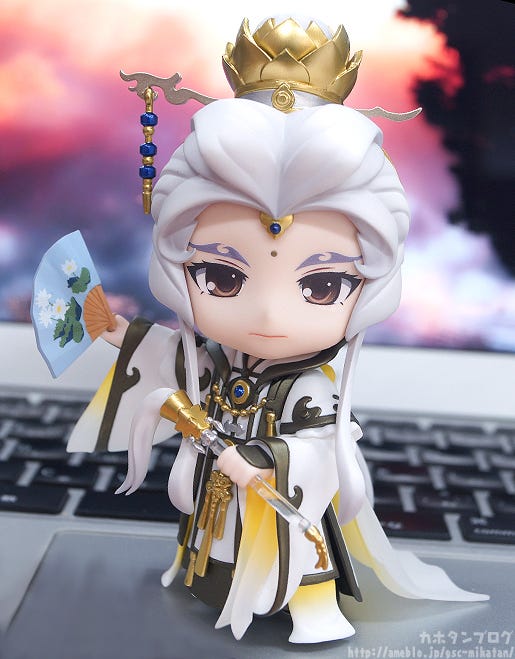 I like my bubble tea to have just a moderate sweetness to it! That allows you to enjoy the sweetness of the tapioca balls more! *nom* (๑´ㅂ`๑) *nom*

Today I’m going to be taking a look at…
Nendoroid Su Huan-Jen:

Unite Against the Darkness Ver.! His elegant outfit, characteristic eyebrows, short ‘hossu’ staff and various other accessories have all been included with careful attention to detail. He comes with two face plates including a confident standard expression as well as a chewing expression for enjoying the included bubble tea!

A Nendoroid of the main character from Taiwan’s popular glove puppetry show “Pili”!

The Nendoroid captures the airy and somewhat showy appearance of his outfit while also capturing his more elegant side! His solemn expression is also overflowing with kindness and dignity! The combination of cute and noble makes for a wonderful Nendoroid!!

Take a closer look at the details of his outfit! ヽ(ﾟ◇ﾟ )ﾉ ▲ The middle part of the sleeves makes use of a semi-translucent yellow gradient! It’s beautiful!

Optional parts include his  short ‘hossu’ staff as well as his sword which have been very carefully converted into Nendoroid size keeping as much detail in tact as possible!☆ Su Huan-Jen is the main character  is from one of Taiwan’s popular hand puppet series called ‘PILI XIA YING: Unite Against the Darkness’ ヽ(●´Д｀●)ﾉ

We happen to have Taiwan staff here in the offices, so I thought I’d get their opinion on the matter!

Before we take a closer look at the Nendoroid itself, lets get some answers to some basic questions like what exactly are hand puppet series and PILI? (｀・ω・´)ゞ

What are Taiwan’s Hand Puppet Shows?
Hand Puppet Shows are also referred to as Palm Shows. This performing artistry of wooden puppets had reached its maturity during the late Ming and early Ching Dynasty in China’s Chuen-cho area. The Puppet Shows came to Taiwan from Fujian Province in the mid-Ching Dynasty (AD.1800) during the wave of immigration from China to Taiwan at this time. Puppet masters, utilizing their unique one-man-multiple-voice talent, enacted stories and legends, with a mix of rich Chinese customs, culture, historical tales of chivalry and stories of passion, brought to life each puppet character. They captured the hearts of audiences and skillfully guided them into the story. Today, Taiwan’s Puppet Shows are climbing another artistic peak through the continuing efforts of a family from Yuen-lin – the Huang Family. (Source: http://www.pili.com.tw/en/)

( ・∀・) “In Taiwan, hand puppet shows are a traditional performance that have long been in our culture. Almost anyone from Taiwan will be familiar with them.”

In recent years the televised versions of these performances make use of CG and special effects and have become somewhat similar to the Super Kabuki shows that is seen in Japan!

Who are PILI?
PILI is short for PILI International Multimedia, who are the largest hand puppet show production studio in the world. They work on the shows from the scripts all the way through to the filming process bringing all sorts of fantastic drama series to fans around the world. The PILI hand puppet series has been running for over 20 years and has been enjoyed by fans in Taiwan for many years. The series still continue at a pace at which every week two DVDs each with a single episode are sold in convenience stores for fans to get as soon as possible.

Some of you may also recognise the name from Thunderbolt Fantasy Sword Seekers, the series which was recently worked on as a joint project between PILI and Nitroplus! Good Smile Company also took part as advisers to the sculpting of the puppets! There are already two Nendoroids from the series! ♪

( ・∀・) “I think that Thunderbolt Fantasy allowed many people outside of Taiwan to find out about Taiwan’s  glove puppetry. I’m glad to see that series from Taiwan had their chance to shine on a more worldwide basis! I’m a huge fan of Betsu Ten Gai!! ♡”

Anyway, moving on to the main topic of today, the series this Nendoroid comes from is called PILI XIA YING: Unite Against the Darkness which is a series that has long been loved in Taiwan! This character is the main character known as Su Huan-Jen!

( ・∀・) “Within the series, there is a section that claims that Su Huan-Jen was in fact the inventor of bubble tea!”

This is why the Nendoroid actually includes some bubble tea as optional parts! You can actually see the little balls of tapioca inside!! ｡:.ﾟヽ(´∀`｡)ﾉﾟ.:｡+ﾟ ▲From the top you can see them clearly, but from the sides you can only slightly see them through the tea! The sudden change from his normally chivalrous expression is great! Not to mention those characteristic eyebrows looking so cute in Nendoroid size! You can see the one side of his cheek is filled with some tapioca as he enjoys his tasty drink! ★

( ・∀・) “If you first look at this expression and then go back to his standard expression it looks even more gallant than before!” He only comes with two face plates, but you can make use of the fan to cover up or reveal the mouth which allows for some rather different displays! ♥ ( ・∀・) “Depending on the pose and angle you can enjoy all sorts of different poses of Susu-sama!”

I hope everyone will enjoy recreating various situations with him when he is released! (*´ｪ`*)

Add your very own Susu-sama to your collection!
Nendoroid Su Huan-Jen: Unite Against the Darkness Ver.!

He is currently up for preorder! ♪