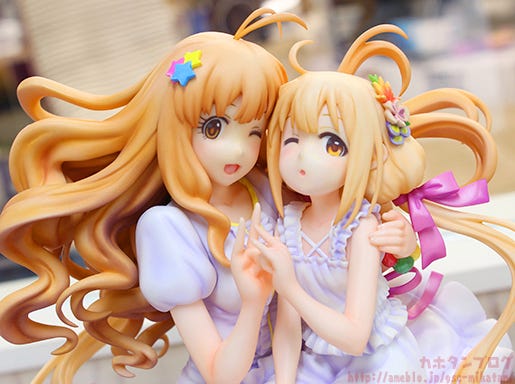 Hi everyone! Suwabe (@gsc_suwabe) from the Corporate Planning Division here! Today I’m going to be taking a look at Phat!’s 1/8th scale figure… A figure based on the “Ankira” Blu-ray/DVD jacket illustration!

From the popular anime series ‘THE IDOLM@STER CINDERELLA GIRLS’ comes a 1/8th scale figure featuring both Kirari Moroboshi & Anzu Futaba! The figure is based on the illustration by character designer Yuusuke Matsuo seen on the 4th volume of the Blu-ray & DVD jacket for the anime series.

Kirari has a cheerful smile on her face as she gently embraces Anzu, who sits relaxed in Kirari’s lap with a sleepy look on her face creating a lovely scene that captures both of the idols in a lovely atmosphere. The cute connection between their hands and the entangled hair have been carefully sculpted to completely recreate the original illustration as a set! The figure also makes use of a light color scheme to better capture the atmosphere from the original jacket illustration.

I was looking forward to this figure’s release ever since I saw the unpainted prototype quite a while back!! The figure was announced last week, but I was really happy honoured when asked to write a blog review for it! (*´ω`*)

I took quite a large selection of photos, so let’s get started! The layering of the hair is simply godlike!! You can hardly tell whose hair is whole due to the way they are tied up together, but if you look close you can see just where and how the hair intertwines, not to mention the amazing detail! By the way, just a quick note that while the final base for the product will be similar to the one below! This upper angle captures the ‘floating’ sensation of the figure really nicely. They look like two little angels wrapped in happiness! Perhaps it’s the way the hair flows out to the sides, but I could swear they have angel wings!! My heart and mind are cleansed!

(I wrote down the above line as a memo a few days ago and finally remembered to use it!) There are so many beautiful details to enjoy here! The curve of stand, the frills of Kirari’s skirt and those lovely bare feet!! Of course if you go for an even lower angle there may be even more to see…

While the outfits they are wearing are a simple white, they have various shades of blues and purples as shadows which gives the figure an amazing appearance… The size of Kirari’s hand compared to Anzu’s! Something about this pose is just so heartwarming!! As I mentioned before the bare feet are a lovely addition, but the shoes are also a very interesting addition to the figure! Comparing the size of the two really shows the difference is size between the two characters! Anzu is one of those characters that could really become anything to me. She could be my friend, my rival, my sibling, my girlfriend… she has such a mysterious yet appealing character that really steals your heart!

Which is why this is the best photo yet! The angel has descended!! Come and take a look for yourself!! Quickly!! ▲ Anzu has a rather youthful appearance, but the flowers in her hair have a very mature look to them which is so very cute! ♡

Double the cuteness with a single figure!
Maybe even more than double! Phat! Company’s…

CURRENTLY UP FOR PREORDER! ♡
ORDERS AT THE GOODSMILE ONLINE SHOP ARE OPEN UNTIL THE 2ND MARCH 2017!

（´-`）.｡oO（ By the time they release the clothes will be better suited to the season!)