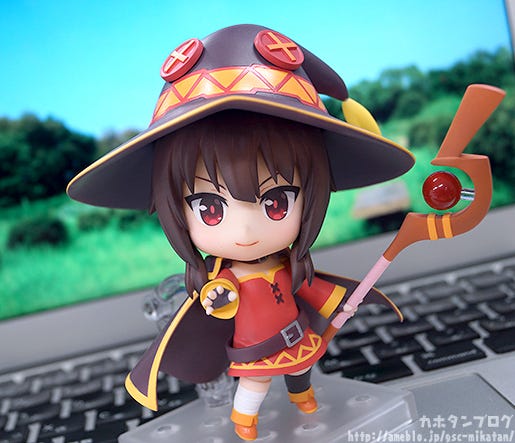 I’m sure almost everyone has had a stage in their life when they thought fashionable eye patches were amazing and decided to buy one for themselves! I can’t be the only one!

Anyway, today I’m going to be taking a look at…
Nendoroid Megumin! From the anime series ‘KONO SUBARASHII SEKAI NI SYUKUFUKU WO! 2’ comes a Nendoroid of the wizard with delusions of grandeur and an affinity to the Explosion spell – Megumin! She comes with three face plates including a smiling face, a serious face for spell casting as well as a cute bashful expression.

Her trademark wizard hat can easily be attached and removed for a quick change in appearance, and various other optional parts are also included such as her staff, an Explosion effect part, her fashionable eyepatch and glinting eye effect parts! Her staff also comes with an interchangeable head that allows you to better pose her casting spells! Be sure to display her with the previously released Aqua!

The arch-wizard who can cast the most powerful of offensive spells – Explosion!

The genius arch-wizard and member of the Crimson Magic Clan, Megumin is joining the Nendoroid series!!

Her sharp red eyes, determined eyebrows, mischievous smile and that amazing pointy hat all come together so adorably in Nendoroid form! The design really captures that ‘wizard’ appearance beautifully! Her cape also adds to that appearance and has been sculpted as if fluttering in the wind to make her look even more amazing! ♪ ▲ The bend over point of the hat also looks lovely! ヽ(ﾟ◇ﾟ )ﾉ

Something else I really want to point out is the shape of her hand that is holding the staff!! Her pinky and index finger are pointing outward!

It looks so very cute in Nendoroid size!! Even with such tiny hands you can show these little playful details! But she also comes with lots more parts to show off her personality, including… “This encounter… was fate!“

You can just imagine her delightful lines from the series!

Along with the determined smiling expression used above, she also comes with a more serious expression for spell casting and more ▲ You can just imagine her incantations!

A rather large Explosion Effect Plate is also included to recreate her using her signature spell! ♡

From the angle above it is a little difficult to tell, but the round center part of the staff also comes with an alternate part to display the staff in use!! The part changes from a solid red to a light pink color with a semi-transparent star in the center!! (∩・∀・)∩

You can feel the love the figure planner had when designing the parts for this figure!!

But then when she runs out of MP… “Oh no!! Our primary firepower!!

Nendoroid Aqua comes to the rescue!! Collecting multiple characters from a single series allows for these fun dual poses and many more situations!! ▲ Create your own original situations in Nendoroid size! The wobbly appearance of her mouth, the worried eyebrows, slight blush and a look that seems to be trying to say something clever but just can’t quite think of it!! Plus as you may or may not have noticed you can also remove the cape and hat for a much simpler but still very cute appearance! ♪

But that’s not all!! This expression has another use! “It’s a bit drafty, so please return my panties.“

You can recreate the scene where Kazuma used the steal skill to steal Megumin’s panties!! Special arm parts that make her look a little fidgety are also included to help bring out the atmosphere of the scene even more! ♡

（´-`）.｡oO（As a side note, Nendoroid Megumin is wearing panties! Those of you who watched the above scene will even know what color her panties are! But if you really want to fully recreate the scene with no panties you’ll have to borrow the lower body section from Nendoroid Aqua which of course is not wearing a- Ah! I must go now someone is coming!)

Be sure to add the cute arch-wizard to your collection!
Nendoroid Megumin! In addition, orders of this product from the GOODSMILE ONLINE SHOP will include a Special Round Base as a bonus!! The next on the base says ‘Quest Complete’!! ♪ Plus this item will also be up for preorder from tomorrow!! If you’re a fan of the series consider picking up the set at the same time!!

（´-`）.｡oO (Hmm… if there is already a Darkness Nendoroid illustration, does that mean what I think it means…?!)

The items above all have preorders at the GOODSMILE ONLINE SHOP closing on the 19th January 2017 at 12:00JST! Make sure you don’t miss out!! There are also some items with exclusive purchase bonuses! (･∀･)/