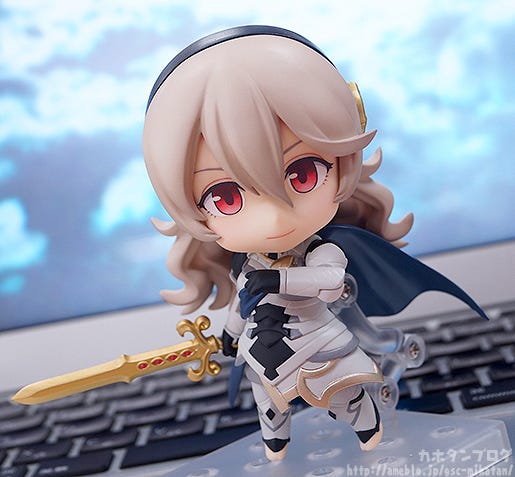 Just one week left of this year!! Time to clean up the offices and send out the New Year’s Cards!! Anyway, today I’m going to be taking a look at…
Nendoroid Corrin (Female)! From the popular game ‘Fire Emblem Fates’ comes a figure of the female version of the main character, Corrin! She comes with two face plates including a gentle smile as well as a valiant combat expression.

Optional parts include a Dragonstone as well as the sword that could only be equipped by Corrin, ‘Yato’! Yato comes in both the Hoshido and Nohr version allowing you to choose the side you prefer!

In addition, the Nendoroid also comes with head and arm parts transformed into a dragon to display her making use of the powerful ‘Dragon Fang Shot’! Be sure to add the female ‘Avatar’ to your collection!

A Nendoroid of the female main character from Fire Emblem Fates!

The character born a member of the Hoshidan royal family but kidnapped and raised by the royal family of the neighboring kingdom of Nohr – the female version of Corrin – or Kamui in the Japanese version of the game – is joining the Nendoroid series!

Enjoy the cute and confident appearance of the ‘Avatar’ in Nendoroid size, ready to command her way to victory with her strong tactical sense and valiant personality! Her red eyes that show off her strong will, that soft, flowing hair and the intricate details on her armor…! ♫

While it is hidden by the hair so you can’ really see it in the photos, the cape is also fitted with a ball joint allowing you to move it around in different directions to better suit all sorts of different poses! ٩( ‘ω’ )و ▲ The cape is sculpted billowing out creating a nice dynamic effect!

Along with the standard smiling face plate used above, she also comes with a combat expression to easily create battle scenes as well! ▲ She looks so very gallant!

In addition, she also comes with ball joints in her shoulders as well as joints in her elbows meaning that her arms can be moved into a variety of poses for some fairly dynamic action scenes! I imagine we will be seeing some rather epic combat photos once she is released! (=´∀｀)人(´∀｀=) ▲  She also comes with bent leg parts which work well for combat scenes!

Plus as I’m sure you have noticed her tiny little feet are indeed barefoot!!

Anyway, let’s move on to her accessories! ▲ Both versions are included with the Nendoroid! ▲ The stone comes with it’s own little stand to display it floating!

Corrin inherited the blood of the First Dragons, which allows her to take the form of a Dragon… and that form can even be partially recreated in Nendoroid size!! (°Д°；≡°Д°；) Alternate head and left hand parts are included which allow you to pose her preforming the  ‘Dragon Fang Shot’ attack in her semi-transformed form!!!

The horned helm together with this… A Dragon Hand!! Such a sinister looking sculpt!!

There are all sorts of possible poses to enjoy with the figure – simply choose the one that you think suits her best!! (*´꒳`*)

Be sure to add the adorable ‘Avatar’ to your collection!

As a side note, also be on the look out for this product from the same series which is scheduled for release in stores in January 2017!! Be sure to take a look at her as well! ヽ(ﾟ∀ﾟヽ 三 ﾉﾟ∀ﾟ)ﾉ