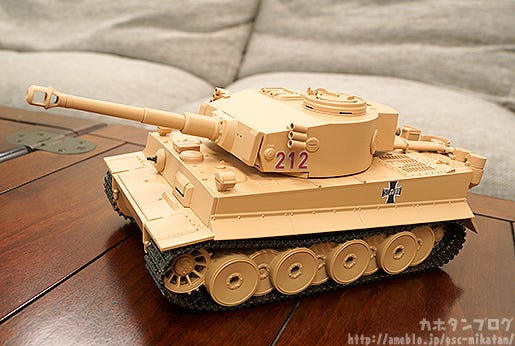 From the popular anime movie ‘GIRLS und PANZER der Film’ comes the 5th tank to join the Nendoroid More series – this time we have the Kuromorimine Girls High School’s ‘Tiger I’, which is the first tank that Maho Nishizumi is seen in!

The details of the tank have been carefully preserved while shrinking the tank down to cute Nendoroid Petite size, and both the driver’s hatch and the gunner’s hatch can be opened and closed! Be sure to display the tank together with the Nendoroid Petite: Girls und Panzer series!

“There is no running away in the Nishizumi-style”

The impressive tank is ready to drive down and crush its opponents! The Dutch ‘Tiger I’ is joining the Nendoroid More series! The rather gentle desert color scheme and all the little bits of equipment with their sharp, detailed sculpts have all been included on the design! ٩( ‘ω’ )و ▲ Comparing the tank with the Nendoroid Petite
Maho shows just how small and intricate it is!

The appearance of the tank tread has also been carefully preserved on the model, with all sorts of bumps to pull it along even the most uneven terrains! ♪ ▲ Be sure to give it a feel once it joins your collection!

In the series this was the flag tank of Maho Nishizumi, which also of course includes the 212 tank number as well as the Kuromorimine Girls High School emblem! (о´∀`о) ▲ These will be printed onto the tank on the final version!

Plus as with the previous tanks in the Nendoroid More series, the turret not only rotates left and right but can also be moved up and down!! Simply move it to match your display! (｡･ω･)ﾉﾞ

In addition, both the driver and gunner hatches can be opened and closed! Note the underside of the hatches are faithfully detailed! (/ω＼)

As the hatch opens, that also of course means that…

You can pose Nendoroid Petites inside!

Note that the Nendoroid Petite figures are sold separately! Simply pose the tank together with the previously released Nendoroid Petite: Girls und Panzer set to recreate the Garupan world in your figure collection! ヽ(●´Д｀●)ﾉ Plus the Nendoroid Petite: GIRLS und Panzer 02 set has been announced! ♥ Find your ‘Way of the Tank’ in Nendoroid Petite size!
Nendoroid More Tiger I!

Currently up for preorder!☆

Preorders from the GOODSMILE ONLINE SHOP will be open until the 19th January 2017 at 12:00JST! Make sure you don’t miss out!