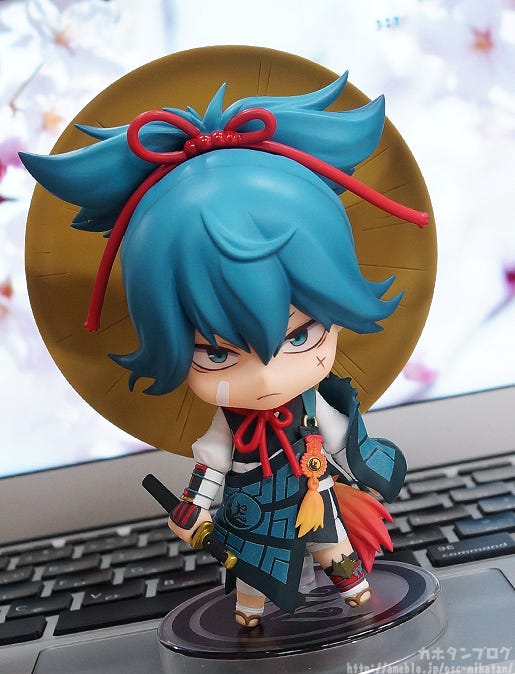 Thanks to everyone who just tuned in to the live broadcast!
Today I’m going to be taking a look at… From the popular browser and smartphone game ‘Touken Ranbu -ONLINE-‘ comes a Nendoroid of the sword who has dedicated his life to revenge, Sayo Samonji! He comes with three face plates including his standard expression, a combat expression as well as an embarrassed expression based on the illustration used for the one year anniversary illustration.

His sword can be displayed both sheathed or drawn, and he comes with both his unique hat as well as a persimmon fruit which he can hold. Special stickers to display him injured are also included allowing for all sorts of situations! Be sure to add him to your collection!

“Is there someone… you want to take revenge on?”

The youngest of the three ‘unlucky brothers’, Sayo Samonji is joining the Nendoroids! His sharp, serious eyes as well as his unique outfit and tie in his hair… everything about his character has been carefully converted into Nendoroid size and it suits the design so nicely! (∩・∀・)∩

Even the dog-shaped plate on his knee has been faithfully sculpted onto the Nendoroid! Not to mention the accessories around his chest and hips! Also note the left sleeve mostly covered up by his outfit!

In order to change this part from a straight arm to a bent arm you need to first remove the straight arm from the blue part and switch it our for the bent arm! This might make more sense if you can see the parts! (｡･ω･)ﾉﾞ I hope you see what I’m trying to get across here!

Even though the sleeves are mostly covered up by the blue part, there are special upper arm parts made to differentiate the position of the tear in the sleeve depending on whether you make use of the bent arm or the straight arm!! Talk about being attentive to details!! ε=(｡・д・｡)

His rather characteristic hat is included and the straps of the hat are made of rubber to prevent them getting in the way of any poses! In addition, his stand comes with a special attachment part to hold the hat up ensuring there isn’t too much of a burden on the figure due to the large hat!

Anyway, moving on to his face plates – along with the standard expression we have used up until now he also comes with a combat expression! Even sharper eyes and gritted teeth! He isn’t going to let his opponent get away without revenge! Even as a Nendoroid he has a nice quick and nimble appearance to him!

Moving onto his third expression… An embarrassed expression with blushing cheeks!

The eyes are also looking a little upward which suits the fact that he is a short character, as it makes it look like he is looking up at his big brothers… expressions like this make it so easy for the imagination to run wild!

You’ll also notice he is holding a persimmon fruit which is also included! The fruit comes from his uchiban outfit from the game! ♪

Plus as you may have noticed his hat can be removed!

But that’s not all! He also comes with alternate hair parts which allow you to display him wearing the hat as well!! (●‘∀‘●)ﾉ”

▲ The alternate parts are slightly flatter to stop the hat bumping against them!

By the way, the back hair is also fitted with joints!

▲ Simply match the hair to your pose! ♥

The front of his hair is also sculpted with a slightly dynamic appearance which makes it look a bit like the wind is blowing through it, which really helps to bring action scenes to life! ▲ He is so enjoyable to look at from any angle!

His base is round with his emblem on it, just like the previous Touken Ranbu Nendoroids! ♪ ▲ The hat is bigger than his base!

As if all this wasn’t enough, he also comes with a set of ‘injured stickers’! ▲ You’ll have to stick these on yourself if you want to use them!

Be sure to add the short sword to your collection! Purchases of this item from the GOODSMILE ONLINE SHOP will include a Nendoroid Plus Rubber Strap: Sayo Samonji One Year Anniversary Illustration Ver. as a bonus!

*The strap design will be revealed at a later date!

In addition, we also have the usual Nendoroid Pouch: Sleeping Bag (Sayo Samonji Ver.) which will be available for order at the same time!