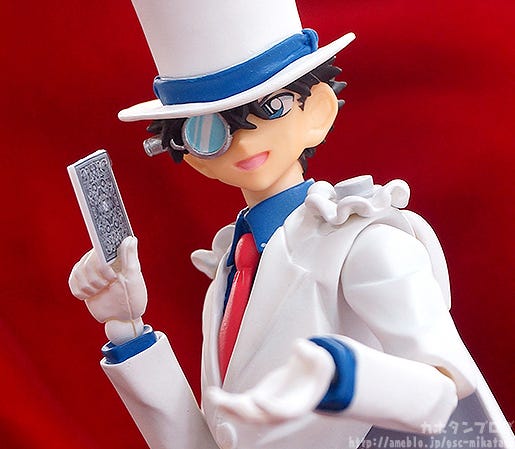 Today I’m going to be taking a look at FREEing’s latest figures in the figma series! Starting off with… “Yes, I am a thief. My job is to steal. Even if that means I must steal someone’s heart…”

His white suit, white top hat and white cape together with his monocle and that devious smile all capture him so perfectly in figma form!! The slightly frizzy hair has also been faithfully captured which should make fans of the Phantom Thief happy!  (´□｀｡)

Even the clasps on the top of his cape have been faithfully included on the figma design!★ From the back you can also tell that the ‘fluttering’ appearance of the cape has been captured nicely! ♥

You can also see his two expressions in the photos above – a pretentious smiling face as well as an alternate smile with his mouth closed making him look a little more serious! ☆ Just looking at him makes me think of his amazing voice and lines from the series! The first character I came to love in the series would have to be Conan, but all the characters in the Detective Conan series all have such appealing designs!

Kid comes with plenty of optional parts too! ♪ You can see the Card Gun in the photos above, and he also comes with two playing cards – the Ace of Spades and a Joker, as well as a hand holding a rose as well as another hand with a dove! (●‘∀‘●)ﾉ”

Here we have a couple of photos to show off the parts! ▲ Kid’s expression looks so gentle with this pose! Plus as you may have noticed from the photos above, his jacket comes with two different parts – one designed for when his hand is in his pocked and another for when he has his hands out! In other words whether or not the slit on the side of the jacket is open! ▲The reverse side of both cards looks like the above! ♡

As you can see, the huge selection of parts allows for all sorts of different situations! Be sure to pose him by your side while imagining his smug lines from the series!! From the anime series ‘Detective Conan’ comes an improved version of the previously released ‘figma Criminal’ – the true criminal is here with figma True Criminal!

But the case wasn’t over yet… the true criminal had only just arrived!

The first criminal is never the true criminal! This upgraded version of the figma Criminal comes with a huge variety of new optional parts compared to the previously released version that was included with figFIX Conan Edogawa!

This True Criminal comes with a shouting expression and grinning expression similar to the previous version, but in addition he also comes with the expressionless face you can see above – perfect for those ominous scenes where the criminal stands behind an unknowing victim…

He also comes with a selection of new parts! ♪ A bunch of items that could easily be used as weapons… and some that don’t quite look so fearsome! Each of the parts comes with hand parts that allows the True Criminal to hold them! If you manage to get him balanced you can also make poses like this! Of course you can always make use of the figma stand for more stable poses! (｡･ω･)ﾉﾞ There were quite a lot of cases that have involved swords! There was that one where a dying message was carved into a dresser, or the case where Heiji’s mother showed just how amazing she could be… even the Crossroad in the Ancient Capital movie! There have been lots of swords in the series! Look for an opening and knock out from behind! It doesn’t matter if you opponent is stronger if you have the element of surprise! As a side note, the Criminal’s target this time around is none other than the figma archetype next:he flesh color ver.! (/ω＼) It might not seem like a weapon, but you never know!! Even if it’s not a weapon you can now pose him in all sorts of selfie scenes as well!!

Anyway, to wrap things up…