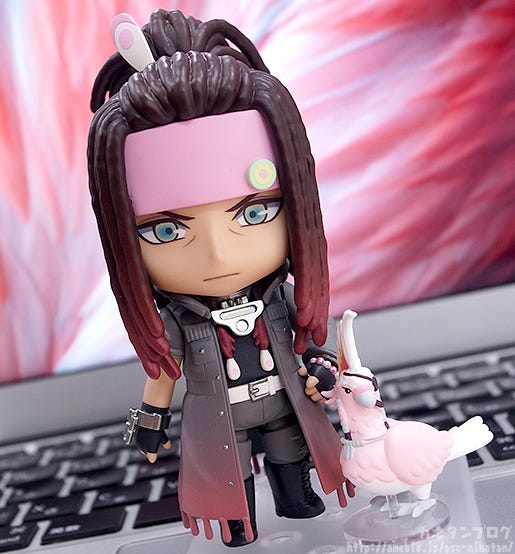 The other day I tried cinnamon milk for the first time! Warm milk with a cinnamon stick added to it together with some honey!! It’s so delicious and warm on a cold day and has that lovely cinnamon scent too!

Anyway, today I’m going to be taking a look at…
Nendoroid Mink! From the PC game ‘DRAMAtical Murder’ comes a Nendoroid of the condemned convict who went through unfathomable despair – Mink! He comes with two face plates including his standard expression as well as an expression with closed eyes that can be used to convey all sorts of different emotions.

Optional parts include his beloved smoking pipe as well as the survival knife that fulfilled his wish. His parrot-type ‘ALL-MATE’ Tori is also included to display beside him. The details of his dreadlocks, handcuffs and other unique accessories have been sculpted with careful attention to detail. In addition, an injured expression for use on Nendoroid Aoba is also included, allowing you to recreate the scene where Mink imposes sanctions on Aoba.

“Do you understand the situation you’ve been put in?”

From the PC game ‘DRAMAtical Murder’ comes a Nendoroid of the convict that has a burning desire for revenge – Mink! His characteristic deadlock hair, the bandanna he wears low down over his eyes, the amazing black and red gradient on his coat, the aggressive look on his face… everything about Mink has been captured so effectively on the Nendoroid! ヽ(´∀`｡)ﾉ

Also note some of the smaller details such as the feather hair accessory, or the damaged parts of his outfit on the sleeves of the coat as well as on his knee! Even for a Nendoroid this much attention to detail is quite uncommon!! Also note how the metal areas are painted with a metallic paint and the pearls on his bracelet also make use of a pearl paint for that shiny appearance! The different paint really helps to bring out the different textures on the figure!! ♪ The back part of his deadlocks has also been faithfully sculpted!

The hair pulled to the back is also fitted with a Nendoroid joint allowing it to be moved around to better suit various different poses! Plus also note that the tips of the hair get gradually lighter! (・∀・)

As I’m sure you have noticed, Mink is also not alone!
He comes complete with his parrot-type ALL-MATE, Tori!! Just like his Master Mink isn’t a very talkative parrot, but his soft feathery appearance has been captured beautifully!! The neck is also fitted with a ball joint allowing for slightly different poses! ♡

▲ Also note the eye-patch and cigar!

Mink comes with an expression with closed-eyes as an alternate face plate! The furled eyebrows make him look like he is in deep thought about something… yet in contrast his eyelids look like they have been closed rather gently! The expression can be used for all sorts of different emotions! It doesn’t look fresh, but rather like it has been on the blade for a little while… those who have played the game will know exactly what this blood stain means!!

In addition to the knife, he also comes with his smoking pipe! At first glance Mink appears to have a very intimidating, powerful appearance… but on the other hand he also could be seen as off in his thoughts, or even praying for someone for with a very dignified appearance! As I mentioned before, the expression with closed eyes really captures all sorts of different emotions that can be used to recreate all sorts of situations! (･∀･)/

Mink also comes with a special part for Nendoroid Aoba! A special injured face plate designed for Nendoroid Aoba to recreate the scene where Mink strangles Aoba is also included with Nendoroid Mink!

You’ll need to display him with the previously released Nendoroid Aoba & Ren to fully recreate the scene! As a side note, the actual scene has Mink using both hands, but the Nendoroid sized version instead has a one-handed version due to limitations with the Nendoroid design! (/ω＼)

Be sure to add the adorable head of Scratch to your collection!
Nendoroid Mink! Be sure to keep your eyes on the Good Smile Company website as well as the ORANGE ROUGE website for more details! ♪

As with the previously released DRAMAtical Murder Nendoroids, Nendoroid Mink will also come with special package background sheet which will only be included with the first edition! The design will be announced on the ORANGE ROUGE Twitter account at a later date!