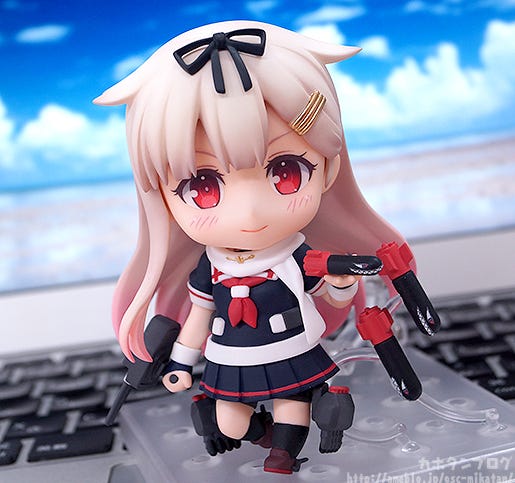 Today I’m going to be taking a closer look at…
Nendoroid Yudachi Kai-II! From the popular browser game ‘Kantai Collection -KanColle-‘ comes a Nendoroid of the fourth Shiratsuyu class destroyer in her upgraded form – Yudachi Kai-II! She comes with three face plates including her standard expression, a confident smile to bring flashbacks of the battle of Solomon as well as a blushing smile that captures Yudachi’s innocent side.

She comes with a torpedo to hold in her hand as well as more torpedoes all with shark faces painted on – these can be displayed by her side or instead firing outward to recreate scenes from the game! Effect parts to display the torpedoes launching, shooting effect parts and the fiery effects seen on illustrations of Yudachi Kai-II are all included allowing for all sorts of different combat scenes – recreate the ‘Nightmare of Solomon’ right in your Nendoroid collection!

Just like the previously released Nendoroid Shigure Kai-II she also comes with a swimsuit body part to recreate her ‘Summer’ seasonal outfit! Yakisoba and shaved ice are also included for her to hold to recreate the illustration! Be sure to have an amazing party together with Nendoroid Yudachi Kai-II!

“Come now, let’s have ourselves a lovely party!”

The fourth Shiratsuyu class destroyer Yudachi is joining the Nendoroid series!! The Nendoroid is based on her Kai-II upgrade which gives her those belligerent red eyes, the cute animal ear-like tufts of hair and the lovely white scarf wrapped around her neck! (*´ｪ`*)

In addition to the Kai-II details her standard sailor-style outfit, white sails and even the rotor on the back have all been sculpted so adorably! ▲ Also note the little torpedoes on her thigh! ♪

Face plates include the standard expression above, as well as… An adorable smiling face that just makes you think of her cute ‘poi!’ way of talking, as well as…

“I’ll show you the ‘Nightmare of Solomon’!!“ A confident smile that shows off her fearless side as she sails into battle is also included!! ε=(｡・д・｡)

In addition, the photo above also makes use of the included fiery effect parts as well as the hand-held torpedoes that also feature flame effects!

Some of you may remember this pose above as it captures the illustration by kujouitiso that was used for this previously announced scale figure of Yudachi Kai-II! ヽ(●´Д｀●)ﾉ Plus as with most of the KanColle Nendoroids she also all sorts of effect parts to recreate battle scenes! From torpedo firing effects to cannon firing effects – just look at this firepower!! ▲ The shark faces on the torpedoes match with her expression nicely !☆

The gun battery parts of her ship parts are also articulated allowing you to fire in all different directions as well! (∩・∀・)∩ ▲ The firing effect parts attach into the holes of the cannons!

You can recreate even more different scenes by displaying her with the previously released Nendoroid Shigure Kai-II! ♪ ▲ I can picture all sorts of different stories!

Plus, there is still more!! Just like Nendoroid Shigure Kai-II she comes with a swimsuit body to recreate her Summer seasonal outfit! Plus she also comes with shaved ice and yakisoba to bring out the Summer atmosphere even more!! The parts can also be detached from the hands and be displayed separately or given over to other characters! (●‘∀‘●)ﾉ”

The little details on the food such as the pink gradient on the crunchy shaved ice or the green nori flakes and pickled ginger on the yakisoba are such a pleasure to see! Also note the little spoon and chopsticks!! ▲ This photo also gives a peek at her belly button!

They also work well with the smiling expression! ▲ It’s like she is offering you the shaved ice!
How could anyone say no to this smile?!

Enjoy a lovely party together with the cute Yudachi!
Nendoroid Yudachi Kai-II!

She’ll be up for preorder from the 29th November!

As usual, orders from the GOODSMILE ONLINE SHOP will also include a Special Box Sleeve & Special Nendoroid Base as a bonus!

Be sure to consider it when preordering! ٩( ‘ω’ )و

Plus we also have many more KanColle Nendoroids on the way! Look forward to them!!