Nendoroid Megumi Kato (Saekano: How to Raise a Boring Girlfriend) 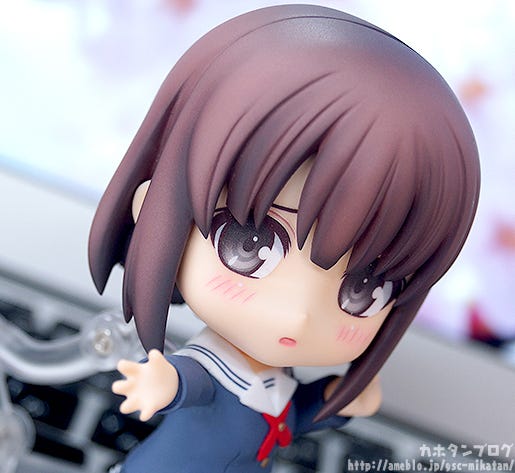 Today I’m going to be taking a look at…
Nendoroid Megumi Kato!♡ From the popular anime series scheduled to air from April 2017 – ‘Saekano: How to Raise a Boring Girlfriend ♭’ comes a Nendoroid of the main heroine Megumi Kato wearing her school uniform! Megumi is known to change her hairstyle frequently, and so the Nendoroid comes with different hairstyles to choose from including a bobcut, a ponytail and one secret hairstyle that will be revealed after release – a total of three different hairstyles on a single Nendoroid!

She also comes with three face plates including her standard expression, an embarrassed expression as well as an upset expression. She also comes with special parts to display her squatting with her hands on her cheeks, and her cellphone is also included for her to hold allowing you to pose her in all sorts of different situations.

“Make me a heroine that everyone else envies, okay?”

The main heroine from ‘Saekano: How to Raise a Boring Girlfriend’ who excels at staying off the radar and never being noticed is joining the Nendoroid series!! She is wearing her Toyogasaki High School uniform which has been faithfully converted into Nendoroid size! Even the cross tie and the buttons on her jacket are intricately sculpted! ♪

Her bob-cut hairstyle with the bangs low down also look adorable in Nendoroid size… but this is in fact just one of three different hairstyles included with the Nendoroid!

The second hairstyle included is this ponytail!! Those who have seen the anime may remember this hairstyle from episode seven! It’s amazing how much she changes with just a quick change of hairstyle – it’s almost like a completely different character! ♡

Short ponytails are quite uncommon compared to longer ponytails, but they certainly have their own special charm! ( ･ㅂ･)و ̑̑

Another important thing to note is that it’s not only the back of the hairstyle that changes – the front hair parts also change for the different hairstyle! The longer hair on the sides is all tied up at the back making for a more slimmed down appearance from the front!

However! The third hairstyle is going to remain a secret for now!

You’ll have to wait until release to see what the third hairstyle is!! For now we’re instead going to take a look at her face plates! ★

Along with her cheerful standard expression, she also comes with this embarrassed expression! ♥ The blush on her cheeks together with the unsure expression and the slightly opened up mouth…. and those worried eyebrows!! (/ω＼)

I tried to capture that troubled look by taking this photo with her eyes slightly off center as if she is trying to avert her eyes to hide her embarrassment! Little does she know it only makes it more obvious!!

An embarrassed Megumi extends her hand out to you… Is just one of the many original situations you can create with the Nendoroid! I hope everyone will give her lots of love once she joins your collections!

The next face plate is an upset expression! It’s quite close to the normally expressionless Megumi, but has a bit of an upset feel to it! I’m sure fans will find it quite memorable! She also comes with her smartphone from the series allowing you to pose her in even more scenes from the series or other original scenes! (∩・∀・)∩

Plus, these parts are also included! Plus she also has arm and hand parts to display her resting her chin in her hands! ♪

(If we look from a slightly lower angle we also get this! So close and yet so far!) Even when bent legs are included with a Nendoroid, I don’t think I’ve ever paid this much attention to a Nendoroid’s knees!! That lovely round and smooth appearance just calling out to be touched!! (‘-‘*)(,_,*)(‘-‘*)(,_,*)

The squatting parts are made up of an alternate lower body part and an alternate skirt part, you simply need to attach it to the normal upper body part to complete the pose! Which of course means you can also easily use the squatting pose with a different hairstyle, expression and arm parts! Simply select the parts that you think look the cutest! ♡

A Nendoroid that won’t go unnoticed in your collection!

She’ll be up for preorder from the 2nd December!

Plus, orders from the GOODSMILE ONLINE SHOP will include a Acrylic ‘blessing software’ Nendoroid Base Keychain as a bonus! A special Nendoroid base featuring the logo of the doujin circle ‘blessing SOFTWARE’! It’s also an acrylic base making it a little more high grade compared to the normal Nendoroid bases! It also comes with a chain so you can instead use it as a keychain should you wish! (・∀・)

*The bonus is still being finalized. The final design may change. Plus we also have Nendoroids of both Utaha Kasumigaoka and Eriri Spencer Sawamura in development!! Look forward to them! ★