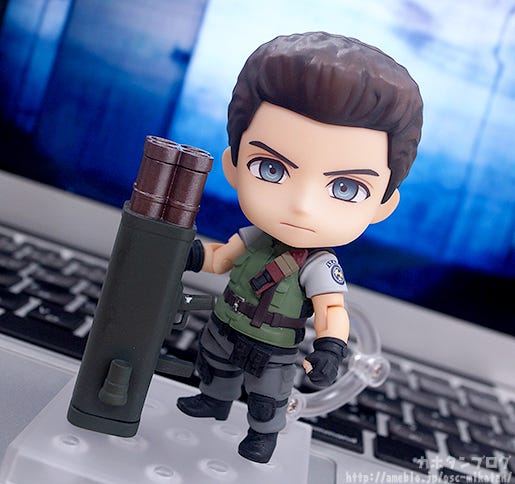 The long nights of Autumn are perfect for staying up late to play games! I wanted to play a certain game that’s been quite popular lately but I don’t even own a PS4 yet! I guess it’s time to consider investing in one! From the popular game series that reached its 20th anniversary in 2016, ‘Resident Evil’ comes a Nendoroid of Chris Redfield! The figure is based on the first generation of Resident Evil, and faithfully captures that fresh charm of Chris’s character in Nendoroid size! Optional parts include a handgun and knife as well as a rocket launcher as weapons. The rocket launcher also includes firing effect parts which can be attached and removed allowing for various different poses.

He comes with both a straight face as well as a strained face plate for more pressing combat scenes. Both face plates have a more defined bridge of the nose as a new endeavor to create more of a masculine appearance for male Nendoroids. The elbows are fitted with joints allowing you to freely pose Chris with his knife or handgun at the ready.

If you stand him carefully you can even pose him in the poses he got into when you sometimes lost control of the character! Plus as a first edition bonus, the Nendoroid base will includes the 20th anniversary logo making it a perfect commemorative item to remember the series by! Be sure to add him to your collection!

From one of the most classic survival horror games of all time ‘Resident Evil’ comes Nendoroid of the character that always finds his way out of the most desperate situations – Chris Redfield!

He holds a huge rocket launcher by his side dressed up in his Lagoon City S.T.A.R.S (Special Tactics and Rescue Service) uniform, and has a tough, clear expression on his face that captures the reliable point man in all his glory! ▲ The detailed equipment on his hips and thighs looks great! ♪

You can also display him holding the rocket launcher ready to fire, and it even comes with firing effect parts! Change from a relaxed scene right into an action-packed firing scene!

He also comes with this strained face plate to better recreate the tense atmosphere of battle! All the expression are based on the first generation of Resident Evil! ☆

The expression also have a more defined bridge of the nose compared to normal to create a more masculine look compared to other Nendoroids! (∩・∀・)∩ If you look at the way the shadows fall around the nose and compare it to another Nendoroid you’ll probably see the difference!

In addition to the rocket launcher at the start and the handgun above, he also comes with the knife that is stores on his chest area! ヽ(●´Д｀●)ﾉ ▲ The knife can be removed from the sheath on his chest!

In addition, he also comes complete with the Green Herb that you need to stay alive throughout the game! You can place it right in front of him and remember the relief whenever you needed and eventually located one in the game! ♪ ▲ Just placing it in front of him brings out the in-game atmosphere!

Last but not least, a special base featuring the Resident Evil 20th Anniversary logo is also included as a limited first edition bonus!! (●‘∀‘●)ﾉ” ▲ Be sure to preorder if you don’t want to miss out on this!

He also comes with a selection of bent arms and legs which you can use to pose him in running poses from the game! Which means you can also…

This is the Chris Redfield that you’ll see when I have the controller! I am sure there are all sorts of other poses that people will come up with once he is released! ☆ ▲ The knife plus this expression makes for a rather manly scene! (・∀・) !!

Be sure to add the classic survival-horror character to your collection!

In addition, preorder from the GOODSMILE ONLINE SHOP will also include a Red Herb as a bonus!☆ ▲ Combine with the Green Herb!