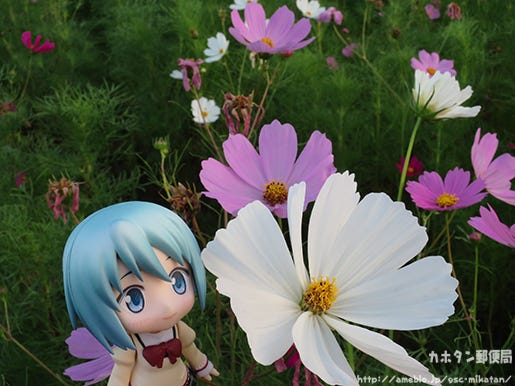 Foreign words are so difficult to read!! (Which is the main reason I decided to major in Japanese history instead of world history!)

Anyway, today I’m going to be taking a look at some of the photos that fans have been sending in to become my next Twitter header!! A big thank you to everyone who sent in photos! The theme this time around was…

Even though we are already a few days into October I’m still wearing short sleeves most of the time! But the mornings and evenings are definitely starting to cool down now which means I think we’re properly into Autumn now! (/ω＼)

That said, I’ve been in Autumn for ages thanks to everyone’s lovely Autumn themed photos! Every photo that got delivered to my email made me feel Autumn was another step closer!! A big thanks to everyone who sent in photos!!! Today I’m going to be taking a look at some of them!

Took this photo in a nearby forest to celebrate the Autumn with Miku. A fairy-like Miku-san sitting in an Autumn forest! I also got a second photo from moonlitsaki so I thought I’d share it too! ♪ The very moment that she dropped a big box of apples!! I can just imagine her crying voice!! ˚‧º·(˚ ˃̣̣̥⌓˂̣̣̥ )‧º·˚

Invited by the Autumn colors, I decided to head out with Kagamin for the first time in a while! You can really see the beauty of the Autumn colors in the background! (/ω＼)

It’s almost Halloween and I wanted to do something special, so I found some pumpkins for Elsie! It’s nothing much, but I wanted to capture that warm atmosphere you get around autumn and Halloween. This time around its Fujiya-related! Milky and Pop Candy are nice and all, but I like things a little richer! Something like the vanilla flavoured Country Ma’am cookies♪ Somehow having Peko-chan there just makes them look all the more tasty! Don’t forget that Nendoroid Peko-chan: School Ver. is currently up for preorder! The photo is just overflowing with Shiburin’s coolness! The combination of girls and cars is also lovely! ♡

Taken in the image of a beautiful sunset on the rooftop! The second year students are all together watching the sunset! I can just imagine them getting together after practice to chat and relax a bit!! (´□｀｡)

The first and second photo are of cosmos flowers, one of the most recognizable Autumn flowers! The third and fourth were taken last year when I went to Nakajima Park in Sapporo to see the Autumn leaves. You can enjoy the leaves from late October to early November in Sapporo – I highly recommend it! I received a total of four lovely photos from Yassun, but only have two of them here – one of each! ☆

Cosmos fields are beautiful put have a somewhat fleeting feeling about them… they do capture the Autumn scenery beautifully though! The second photo with the lovely Autumn leaves as well as the reflection of them is also beautiful! The red also matches with the red on Yamato’s outfit beautifully! ♡ Such a big pumpkin in the garden!! Wow!! Miku-san is surrounded by nature like a little Halloween fairy that looks ready to jump to life!! (∩・∀・)∩

Osomatsu-niisan went out to catch some fish to appease his Autumn appetite… but it seems he wasn’t able to catch anyting and get got a bit frustrated! (；・`ω・´) The cute, relaxed cats contrast with the frustrated Osomatsu-san so nicely!! A lovely, well-thought out photo!! ♪

The timid and shy Yukiho Hagiwara (萩原雪歩) from the iDOLM@STER series. This figure from phat captivated me with its dynamic pose and fine detail. I tried to add a background which fits her pose.
I just got creative and took this shot at home because we don’t have autumn here :(
Dunno if this is valid, but it’s worth a shot :)
– reggiepen I also love this series from Phat! Company! They really are sculpted with such lovely detail and just as you say Yukiho seems to be very  (=´∀｀)人(´∀｀=)

Hiei: “Mission Complete! Fleet returning to base!”
The Harvest of Autumn! They must have been sailing through the mountains! Hiei and Haruna have such lovely smiles and a lovely harvest to boot! The lovely lighting makes it seem like early evening and the detail of the room looks so beautiful!! I can really feel all the love put into this photo!! (*´ｪ`*) The red spider lily matches up with Nekoma High’s uniform rather nicely!! Beautiful! ♥

That’s all for today! I hope everyone enjoyed the photos as much as me!! There were all sorts of different aspects of Autumn that were all captured together with figures so nicely!!

Thanks again to everyone who sent in photos!!

On the next Kahotan’s Post Office I will be selecting the photo that will be used in my header!!  (∩・∀・)∩