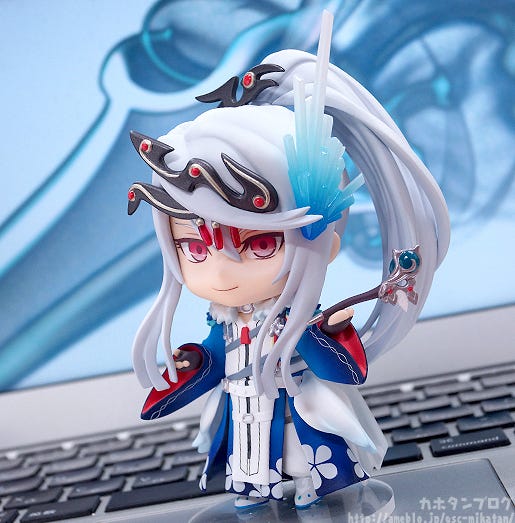 For some reason whenever I visit Taiwan it always seems to be raining! I’ve been there four times now and every single time there as been rain! (°Д°；≡°Д°；) From the martial-arts fantasy glove puppetry series ‘Thunderbolt Fantasy Sword Seekers’ comes a Nendoroid of the mysterious and elegant Lin Setsu A! The Nendoroid comes with three different face plates including a standard expression with a refined look, a chibi expression based the character drawn by Yuupon as well as beautiful expression based on the actual glove puppet used in the series!

Optional parts include his pipe together with special smoke effect parts as well as a little white bird for him to send his bird messages! Enjoy the mysterious Lin Setsu A in your collection!

The mysterious Lin Setsu A the ‘Enigmatic Gale’ is joining the Nendoroids!

From the popular martial-arts fantasy glove puppetry series that is currently being broadcast and is quickly reaching its climax, ‘Thunderbolt Fantasy Sword Seekers’ comes a Nendoroid of the mysterious, graceful and good-looking Lin Setsu A! His beautiful white and blue outfit with touches of red has been beautifully converted into Nendoroid size, keeping that high-class, elegant charm that was included on the original puppets in the series! ヽ(´∀`｡)ﾉ

By the way, ‘Enigmatic Gale’ is the name he is known by, and the name ‘Kichou’ is a fake name he uses in the series! I see many people get confused as to what his name is, but the characters actual name is  Lin Setsu A! (Which just to confuse things even more is Lin Xue Ya if you use the Chinese readings instead of the Japanese readings!)

Anyway, let’s get back to the Nendoroid! ヽ(ﾟ∀ﾟヽ 三 ﾉﾟ∀ﾟ)ﾉ The lovely long ponytail is fitted with a Nendoroid joint which allows you to match the flow of his hair with various different poses!  (｡･ω･)ﾉﾞ

He also comes with his pipe together with special spoke effect parts that really bring out the character nicely! The gentle swaying of the smoke together with the calm yet mysterious smile… it creates such a lovely image of Lin Setsu A!! ♡ ▲ Deceiving both friends and foe! Yet you can’t help but like him!

But let’s take a look at the other face plates that he comes with! ♪ This expression was based on the chibi character drawn by Yuupon from Nitroplus!! The cute eyes have such a characteristic look! ♥

The difference between this expression and the previous one is also a very enjoyable contrast!

Plus as you can see he also comes with one of the little birds that he often calls in the series! The little bird in Nendoroid size is also so very adorable!! ♪ His eyes have slightly more detail to them which gives him a very impactful appearance! Using this expression you could even make your own Nendoroid-sized glove puppet-like shows!

Recreate all sorts of fun scenes from the series with the Nendoroid! Be sure to add the ‘Enigmatic Gale’ to your collection!♪ Plus there are currently a number of Thunderbolt: Sword Seekers goods that are up for preorder at the same time! Be sure to check them all out! ☆ There are lots of exclusive items and a menu based on the characters from the series! Don’t miss out!