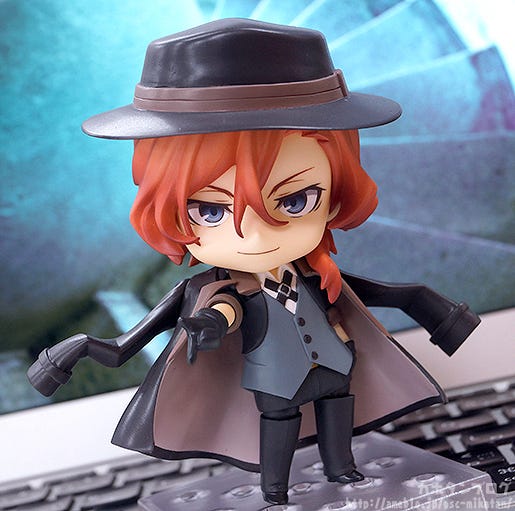 I have plans to make great use of my Kindle during the upcoming long Autumn nights! It’s so amazing that we live in a world where you can get a whole new book with just the click of a button!!

Anyway, today I’m going to be taking a look at…
Nendoroid Chuya Nakahara! From the anime series ‘Bungo Stray Dogs’ comes a Nendoroid of Chuya Nakahara, one of the executives of the Port Mafia that have strong control over the ports! He comes with three face plates including his standard expression, a belligerent combat expression as well as a humiliated angry expression.

The long black coat he wears over his shoulders as well as his hat can both be removed for different posing options. Optional parts include his knife to place him in poses that show him off as the strongest martial artist in the Mafia, and he even comes with parts that allow you to pose him with walking pigeon-toed just as Osamu predicted! Be sure to display him with the previously announced Nendoroid Osamu Dazai!

One of the executives of the Port Mafia who can’t stand Osamu Dazai – Chuya Nakahara is joining the Nendoroids! His rather short stature as well as the toying expression ready to play with his opponents have all been faithfully included on the Nendoroid design! The wavy red hair and stylish black outfit also look great in Nendoroid size! ♪ The jacket is sculpted blowing about in the wind which makes him look stylish and awesome even from the back! Plus the sleeves are fitted with joints allowing you to move them around slightly to match various different poses with ease! (/ω＼)

While he looks amazing alone, displaying him in confrontation with Nendoroid Osamu Dazai allows for even more fun!! ☆ ▲ You can just imagine their voices!

Anyway, let’s move on by taking a look at his alternate face plates! A figure that captures his belligerent side with small, serious pupils as he heads into combat! He also comes with bent leg parts as well as a knife to hold in his hand to really complete the attack scene! ☆

With the jacket removed you can get a nice look at this rolled-up sleeves, waistcoat and back! (∩・∀・)∩ Even though the outfit is so small in Nendoroid size the little details such as the creases in his gloves have been so carefully sculpted! The tight body line normally hidden by the overcoat is filled with highlights to enjoy!! Be sure to take a nice close look once he joins your collection! ♪ A face taken directly from the scene where he is outwitted by Osamu Dazai! ε=(｡・д・｡)

It’s called an angry face, but there is also a certain amount of embarrassment in the expression that really brings out the sore loser side of his personality!! ▲ Chuya angry at having his hat stolen!

Plus as you can see in the photo above, if you pose him with two bent legs you can make a pigeon-toed pose which fans might remember from the series! ｡:.ﾟヽ(´∀`｡)ﾉﾟ.:｡+ﾟ

Recreate all sorts of scenes from the series with the various included parts and expressions! From his tough smile, to his combat mode or even his cute angry expression! ☆ Plus, orders from the GOODSMILE ONLINE SHOP will include a Nendoroid Plus Rubber Strap: Chuya Nakahara as a bonus! Be sure to consider it when preordering! ヽ(*´Д｀*)ﾉ

On a related note, this product is scheduled to release later this month!!★ The characters from ‘Bungo Stray Dogs’ are joining the Picktam! series of rubber straps with exchangeable expressions! The line-up features eight different characters including Atsushi Nakajima, Osamu Dazai, Doppo Kunikida, Ranpo Edogawa, Junichiro Tanizaki, Kenji Miyazawa, Ryunosuke Akutagawa and Chuya Nakahara! Each character’s face part had two sides each with a different expression, allowing you to pick the one that suits your mood best each day!