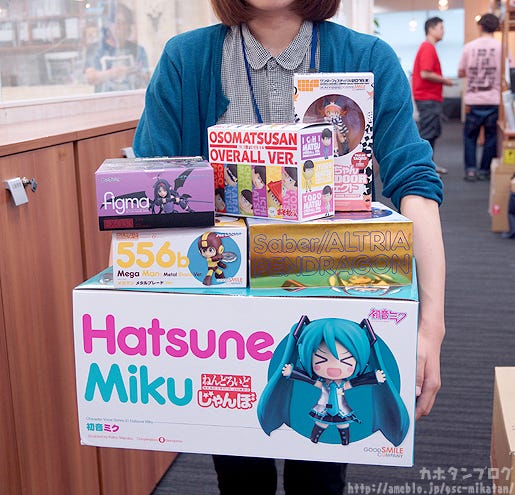 ONLY FOUR WORKING DAYS UNTIL WONFES!

With Monday being a public holiday here in Japan there isn’t much time left until the big event!! I’m already nervous!!

That said, it’s a day full of new announcements and fun to be had for figure fans all around the world so I’m also very much looking forward to it! There are even a few items that I planned that I’m looking forward to revealing for everyone!!

Anyway, today I’m going to be taking a look at some of the products that are going to be on sale over at out booth at the 2016 Summer Wonder Festival! From the popular smartphone game ‘Fate/Grand Order’ comes a Nendoroid of Saber/Altria Pendragon as a commemoration product to both Good Smile Company’s 15th anniversary and the Nendoroid series’ 10th anniversary! She comes with four expressions including her gallant standard expression, a shouting expression for combat scenes, a gentle smiling expression as well as a chibi expression reminiscent of the previously released ‘Nendoroid Lazy Saber: Limited Ver.’.

She also comes with both the cape and crown that she wears after her ‘Ascension’, which can be attached and removed whenever you wish. Excalibur, Caliburn as well as Invisible Air are also all included as optional parts to recreate various different scenes. Be sure to add the second coming of Saber to your collection!

The Packaging is So Extravagant!
It also opens up rather differently to most Nendoroid boxes! (●´ω｀●)

The shiny golden design is nice and suiting for the commemorative Nendoroid No.600!! She also comes with four different expressions allowing all sorts of different poses from epic fighting scenes to more cute and playful scenes with the ‘Lazy Saber’ expression! Simply pick the expression and pose you prefer! As a part of the Good Smile Company 15th anniversary and Nendoroid 10th anniversary celebrations, the popular ‘Nendoroid Hatsune Miku’ is coming back in jumbo size – standing approximately 27cm in height!

The giant Nendoroid has all the features various interchangeable face plates and can take all sorts of poses just like its smaller counterpart! Even though it is much bigger, the unique form and cute expressions of the Nendoroid have been faithfully preserved creating the perfect anniversary item to celebrate the Nendoroid 10th Anniversary!!

A huge Nendoroid Hatsune Miku just asking to be hugged! ♡ △ Hands courtesy of Miura from the Planning Team

As I’m sure you could tell from the photo above she also comes in a giant box with a giant blister package!!

△ An alternate expression, bended arms and
legs and a giant Nendoroid stand are all included!

Although she is much larger, the moments and poses that she can take are all exactly the same as any smaller Nendoroid! (｡･ω･)ﾉﾞ Displayed together with a normal Nendoroid gives you a good feeling for just how much bigger the Jumbo Nendoroid is! You can fit a person’s head inside the box!!

By the way, I tried doing this myself as well and I have to say that it was a rather unique experience! If you pick up Miku be sure to give being a figure in a box a try! From the popular ‘Mega Man’ series comes a Nendoroid of Mega Man once he has defeated Metal Man and taken the ‘Metal Blade’ power! Optional parts include the powerful ‘Metal Blade’ special weapon in both a small and large size, allowing you to pose Megaman both holding the blade at the ready as well as have it flying through the air as if it had just been thrown!

He comes with the same standard expression and damaged expression from the previous Nendoroid Mega Man, as well as a slightly different expression with clenched teeth. He also comes with various other optional parts to help you recreate and enjoy all sorts of different scenes!

One of the items that has already been on sale at the recent Anime Expo 2016 event held in America! WonFes will be the first sales in Japan! (⌯¤̴̶̷̀ω¤̴̶̷́)✧

He comes with both small and large metal blades, bent leg parts and even an E-Tank for all sorts of scenes from the game! ♪ △ I personally love the damaged expression and pose! In addition two post cards are also included which can be used as backgrounds for the figures using the included card stands! Enjoy the unique traits of each of the brothers as cute mini figures!

This will only be sold as a complete set of six characters so you are guaranteed of the characters! △ The box is cute, but so is the way they all fit into the blister pack!

The set also comes with two post cards as well as a special attachment part that allows the post cards to be used as a background to the characters! ♪ Plus, the head parts can be switched between characters as well as with the previously released Osomatsu-san Trading Figures… …which means you can do things like this! (੭ु ›ω‹ )੭ु⁾⁾ △ I recommend this match up for Karamatsu Girls! From the anime series ‘Sword Art Online II’ comes a figma of Yuuki, the ‘Absolute Sword’!

“The skill is called ‘Mother’s Rosario’. I’m sure it will keep you safe.”

The photo above makes use of my personal favorite innocent smiling expression, but she also comes with wings and a shouting expression perfect for combat scenes! Recreate your favorite scenes from the series! ♪ With Sword Art Online: The Movie – Ordinal Scale- coming to theatres in Spring 2017 it looks like we still have much more Sword Art Online to look forward to in the future! ٩(๑òωó๑)۶ The perfect souvenir for WonFes!

The second in the NEXT DOOR Project of figures that are sold only for WonFes! Just like last time, the rather sexy Wonda-chan is based on an illustration from an up-and-coming illustrator! ★ △ This is how she looks from the back! ☆

Her neck is connected with a ball joint which allows you to move her around for slightly different nuances! I hope there was something that tickled your fancy!

Along with the products above, there are also a couple of other items that will be on sale at the event, so be sure to take a look at the official site for more information! ☆ △ Here are a few more of the items that will be on sale!

By the way, if you stack up all the boxes of the items I introduced today, they are about the same height of a female GSC staff member! △ This large paper fan will be given out for free at the event! (✿╹◡╹)ﾉ