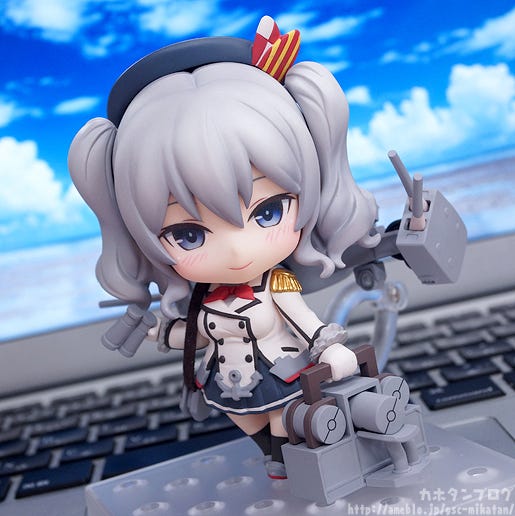 From the popular browser game ‘Kantai Collection -KanColle-‘ comes a Nendoroid of the 2nd Katori-class Training Cruiser – Kashima! She comes with three face plates including a standard expression, a half-damaged expression and a winking expression.

A lunchbox filled with sandwiches and well as a gratin are included as the usual food parts, and she even comes with a selection of parts to recreate her Christmas graphic from the game! Enjoy Kashima by your side in all sorts of different poses!

The latest in the KanColle Nendoroid series! The 2nd Katori-class Training Cruiser Kashima is joining the Nendoroids! Just like the previously released Katori she has a rather tight-fitting outfit, but unlike her older sister she is wearing a pleated skirt which gives her a more casual look! Plus just like her older sister her impressive boobies have been faithfully included even in Nendoroid size!

The ship parts on her back, binoculars in her hand and the Type 94 Depth Charge Projector have all been so intricately sculpted, and the pouch in the shape of a ship’s bridge makes use of a strap made from actual cord and her lovely fluffy twintails are fitted with joints which means you can pose them swinging to the left and right to better match your poses! (๑•̀ㅂ•́)و✧

Plus she comes with all sorts of lovely optional parts! Let’s take a closer look! (/ω＼) First up are these firing effect parts!

Plus she is also the very first KanColle Nendoroid to include a Type 94 Depth Charge Projector, and she even comes with parts to display it firing! (´□｀｡) You can combine the depth charge parts with the expression based on her half-damaged pose to recreate a scene where she accidentally set off a depth charge! (・∀・)

Plus if you’ve been paying close attention you’ll also note that the searchlight on her ship parts comes with interchangeable parts to display it lit up! They are pretty small parts so be careful not to misplace them!

Plus, as with all the KanColle Nendoroids before her, she also comes with food parts! This time around two different parts, the first of which is some sandwiches for lunch! ♥︎ Then for dinner we have a Kashima special – Chicken Gratin! ★ △ The little bread crumbs on the top are such a nice touch!
In other words you can enjoy all sorts of Kashima’s home-cooked meals filled with love! But that’s not all… She even comes with a completely interchangeable upper body part to transform her into the limited edition Christmas version seen in the game!! The hand-knitted red sweater has such an intricate little pattern!!  (੭ु ›ω‹ )੭ु⁾⁾♡

In addition to the body she also comes with a Christmas hat with accessory as well as a fluffy looking Christmas cape to really complete the festive appearance! △ She pretty much comes with a completely alternate body!

As you can see above it suits the winking expression really well, but you can also switch out for the half-damaged expression… Simply pick the expression that you think suits her best!! ((＞д＜))

Add the small and cute training cruiser to your collection!
Nendoroid Kashima!

She’ll be up for preorder from the tomorrow! ♡

As usual, preorders from the GOODSMILE ONLINE SHOP will also include a ‘Nendoroid Kashima’ Special Box Sleeve & Special Nendoroid Base as a bonus! (●´ω｀●)

Be sure to consider it when preordering! ★

Plus another product up for preorder tomorrow! The legendary Magic Knight is joining the figma series!

She comes with a cheerful smile, a shouting expression and even a sword made from the legendary mineral ‘Escudo’! Plus she also comes with a grinning expression that captures her innocent personality so nicely! ♡ Last but not least she also comes with hair parts with cat ears to recreate the scenes in the series where she would sprout the kitty ears!