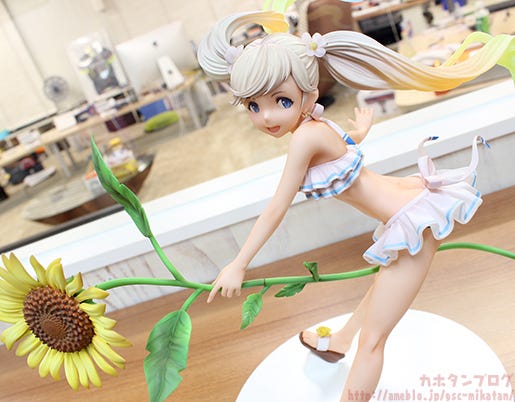 Hi everyone! Suwabe (@gsc_suwabe)  from the Corporate Planning Division here! I was born in Summer so I feel I have a bit of an affinity for sunflowers! From the popular smartphone game ‘Granblue Fantasy’ comes a 1/7th scale figure of Io! She has been sculpted in her Summer version wearing a cute blue and white swimsuit which contrasts with her tanned skin beautifully

The colorful gradient of her hair has also been preserved and also makes use of translucent parts to capture the unique charm of the illustration in figure form! Enjoy the playful appearance of Io as she looks out to the sea for the first time!

The Little Lady of Midsummer also known as the Summer version of Io is becoming a 1/7th scale figure! Her superb skin color and the sculpting of the muscles as they pull tight in her pose are both fantastic!

Not to mention the dynamic sculpting of her colorful hair and the careful shading done throughout the figure! The large sunflower she is holding also has such a powerful presence, creating a figure filled with highlights!

I’ll be revealing when she will be up for preorder a little bit later, but for now let’s take a closer look at the details! (ΦωΦ)

Io is well known for her darker skin tone and the swimsuit just matches up with the tanned appearance so perfectly! Apparently the color went through a number of changes through the prototype stages, but through trial and error finally managed to reach this lovely appearance! ▲ The contrast of the swimsuit with her skin makes for such a nice color balance!

Scale figures that reveal a lot of skin are often defined by how the muscles and tendons are sculpted! Keeping these looking realistic as well as appealing is one of those things that really shows a high quality figure! The sculpt of her elbows and knees really brings the figure to life! It feels like she’ll just start moving any second now! Plus just look at that sexy bu… those sexy hips!! ( ;∀;) The way those muscles are sculpted around her stomach!!
I can’t help but want to touch them!!

▼ Such an incredible feeling of movement…! ▼ Such an outstanding gradient…! The beautiful colors of Io’s long twin-tailed hair could easily be her most charming feature! It’s not easy to get colors to come out nicely on translucent materials like those used for her hair here, but Phat! has not only managed to capture the colors and appearance perfectly but even preserved the dynamic feeling as the hair flows behind her! Thank you!! ( ;∀;) Don’t think that this flower is just an extra!
With Io sculpted so adorably it would be rather disappointing of the sunflower didn’t match her quality… but just look at the little details on both the sculpt and the paintwork!

The slightly darker gradient of the petals toward the ends and the multiple layers of the seed head make it look like she is really holding a freshly picked sunflower! ▲ The leaves are also very detailed! Ready for some photosynthesis!