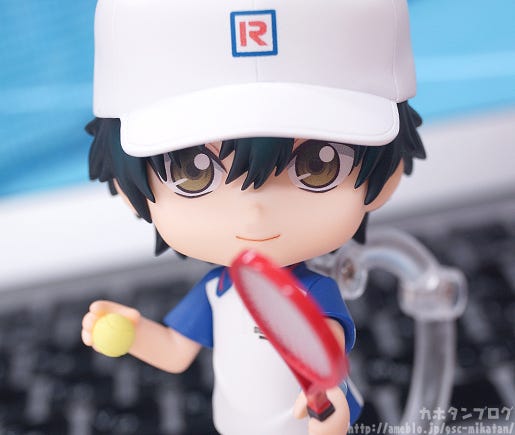 Everyone in the offices keeps asking me if I got a tan while I was away on my business trip. I don’t remember being out in the sun that much…!

Anyway, today I’m going to be taking a look at…
Nendoroid Ryoma Echizen! From the anime series ‘The New Prince of Tennis’ comes a Nendoroid of Ryoma Echizen! He comes with three face plates including his standard expression, a composed smile and a more serious expression to recreate various different scenes from the series!

The Nendoroid also includes effect parts to recreate Ryoma’s signature shot – the Twist Serve! A curve ball as well as Ryoma’s pet cat ‘Karupin’ are also included to display by his side! Enjoy various different sides of Ryoma in Nendoroid size!

This Nendoroid was announced on the New Prince of Tennis Official Site yesterday! All the little details like his wristband, the tennis ball and his red tennis racket have all been faithfully preserved in Nendoroid size! The Seishun Academy shirt and his trademark white hat are also looking lovely!

I also love the way his casual hair style has been sculpted! You can just imagine it being smooth and silky to the touch! (๑•̀ㅂ•́)و✧ Let’s move on by taking a look at his alternate face plates!

“You still have lots more to work on…” He looks so sure of himself with this smile!

Ryoma is known for his perfect technique and game sense that overwhelms opponents no matter who they are, and this smile captures that confidence of his so nicely!

He also comes with bent arm and leg parts that allow you to create action poses with more of a dynamic feel to them! (๑•̀ㅁ•́๑)✧ The difference between his standard smile and this confident smile really captures that slightly conceited side of his personality! (‘-‘*)(,_,*)(‘-‘*)(,_,*)

But there are some opponents that require him to take things a little more seriously, and he comes with an expression for those matches as well!! Looking at the photo above makes me feel like I’m a tennis ball flying toward Ryoma… he’s looking right at me!! Special effect parts to display him performing his signature Twist Serve are also included! Even the warped appearance of the ball has been sculpted!! (｀・ω・´)ゞ △ The ball isn’t quite round, but instead squished by the force!

Plus, he also comes with… His neck can also be moved left and right to create different nuances when posing!  (●ↀωↀ●)✧ △ With careful balance Ryoma can even hold the cute kitty!

From cute poses playing with Karupin to serious poses in the court!
Be sure to add the Prince of Tennis to your collection! ♡ Another announcement was also made on the New Prince of Tennis Official Site! The captain of Hyotei Gakuen’s tennis team is also joining the Nendoroids!
Nendoroid Keigo Atobe!