May 9, 2012NendoroidBy Kahotan
Check out more figures at the
Good Smile Company website!

An eggplant from the Bon Festival…!! 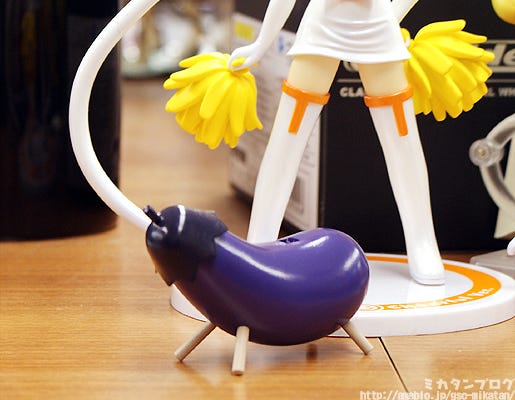 Only one character would include this!

Those who saw him at WonFes will know who I mean! Finally the time has come to take a closer look at him!

The title and optional parts may have given it away, but today we’ll be taking a look at this lovely Nendoroid! (`･ω･´) 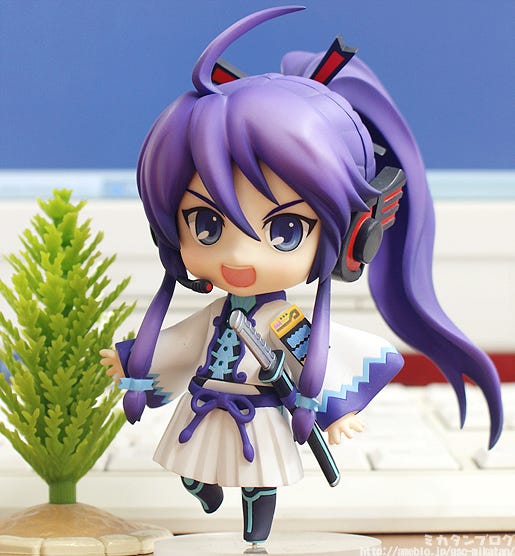 The Nendoroid of the popular virtual vocalist is finally here! The original illustration of Kamui was by Berserk’s author, Kentarou Miura, and the Nendoroid can take the pose of the illustration perfectly! 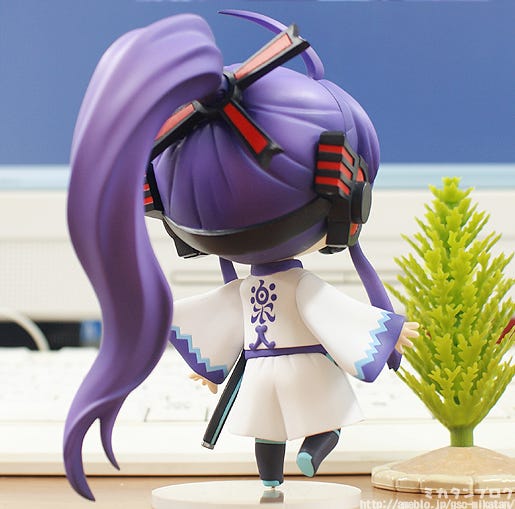 From this angle you can see Gakupo’s lovely long ponytail! It is fitted with a Nendoroid joint for some lovely posing as well! The samurai-esque outfit also looks lovely from the back – you can even see the symbol on his back which is the kanji for ‘enjoy’. 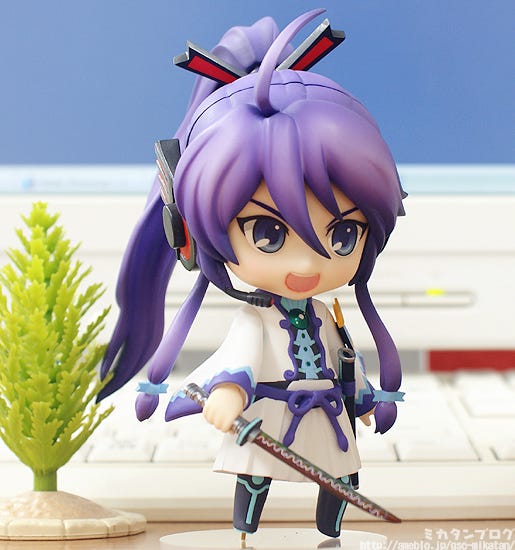 You can display the sword drawn from its scabbard! The sword is in fact not a weapon at all, but in fact a musical instrument!

The detail on the sword is incredibly detailed – the red and green pattern along it is beautiful!! 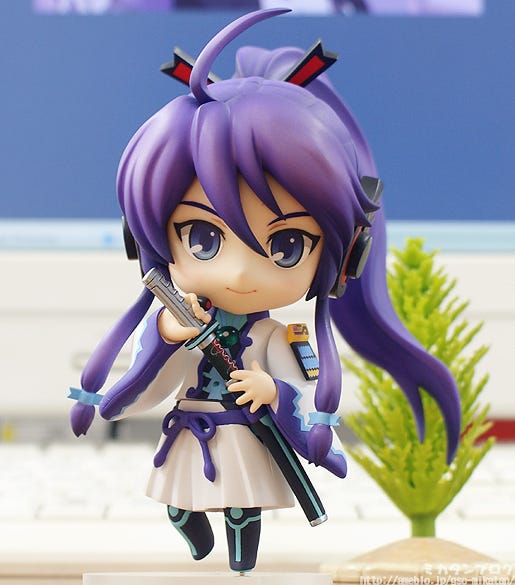 The pose from the packaging!

Two bent arms along with a half-drawn sword are both included as optional parts!
The original illustration has a lovely artistic image about it, but the Nendoroid has come out super cute!

I must admit that I can’t help but wonder what he would look like with the glossy lips – I’ll have to play around a bit it when I get hold of the non-prototype version. 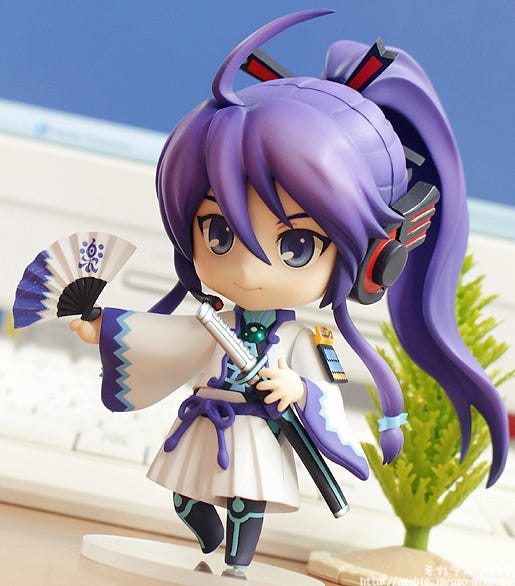 A folding fan with the same kanji!

Even with a rather fancy bumpy design, there is still a lovely print on it! Gakupo himself is amazing, but the small details on the little accessories like the fan and headphone are just as incredible!

If you were wondering that, then you really pay close attention to detail! :P

This article only features the bent leg, but the figure does include two straight legs for more standard poses!

You’ll have the choice between a straight leg or the bent leg! 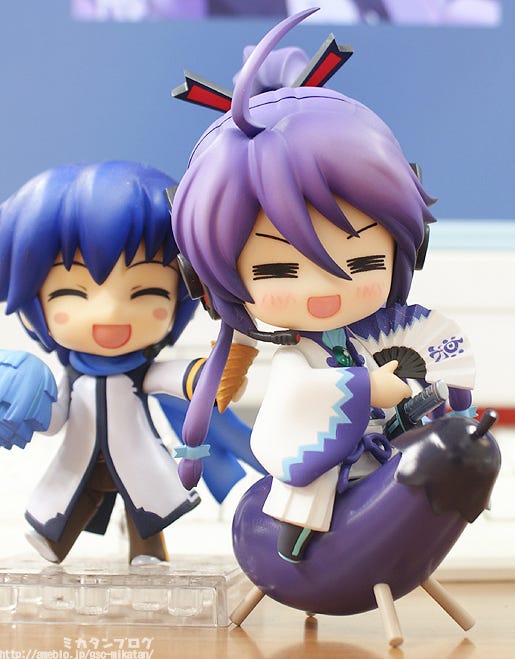 The feudal lord face, sitting parts and the eggplant to ride on!

A truly incredible scene! I don’t think the picture does it justice, you just have to see it for yourself! The balance of the figure is stunning and he is just so cute!!

Although a quick note about the eggplant… at the beginning of this post there was a picture of the eggplant alone – but the final product may have the sitting parts connected as a single part.

He’ll be up for preorder from tomorrow!! Yay!

If you have any preorder or sales questions be sure to get in contact with out partner shops!

And finally a quick notice! 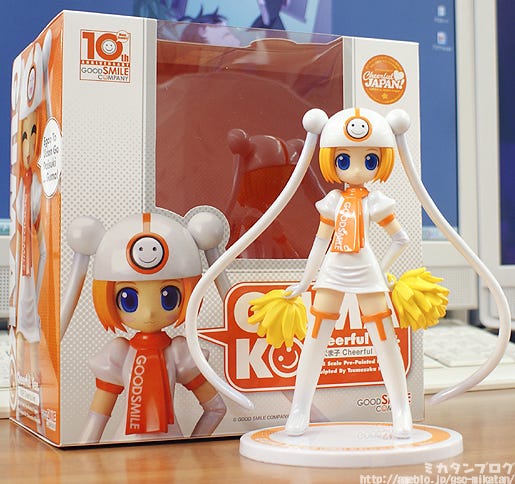 I’m sure she has already arrived for some people, as she was shipped out on the 7th May! You should be receiving your’s soon if you ordered her! 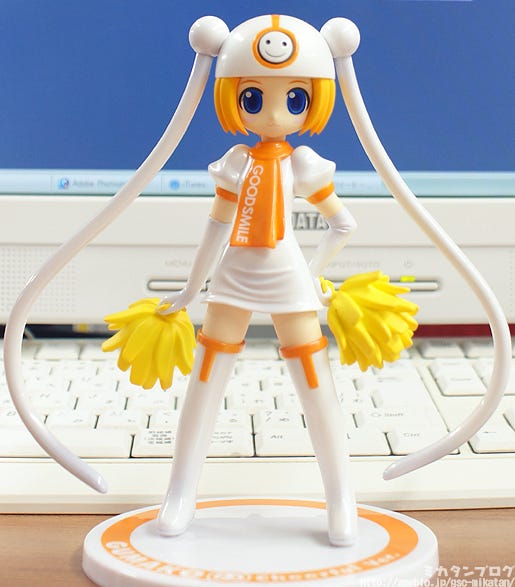 She was produced and manufactured by Alter!

She comes with a set of arms holding pompons and another without! Plus bendable udon for her hat is included so you can customize her pose, even though she is a scale figure!

A big thanks to Alter for working together with us on the Cheerful JAPAN! project! Also a big thanks to everyone who brought the products – I hope you give them lots of love!