I spy with my little eye… something on Oda-P’s desk…! 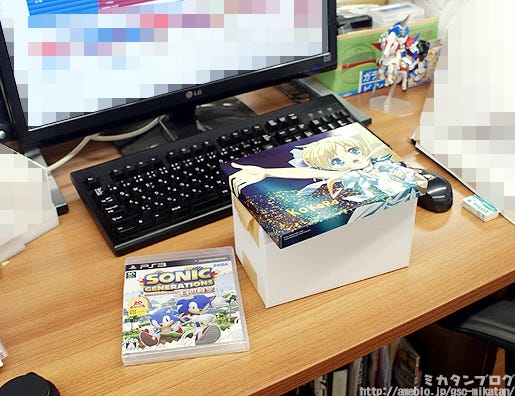 The Sonic game beside also peaks my interest… (I grabbed the 3DS version myself!), but even more important is what is beneath it! 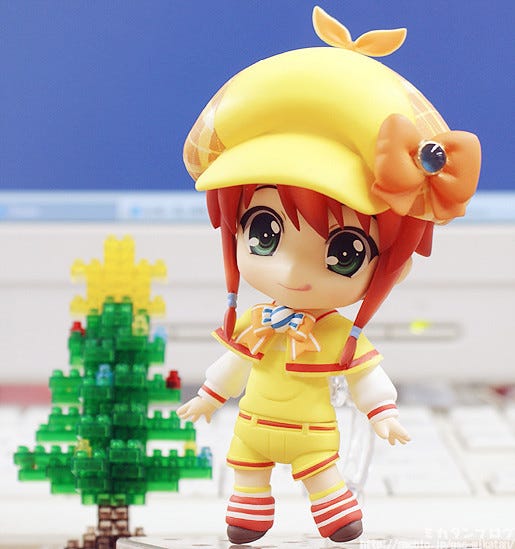 The playful Milky Holmes member from the anime series with a second season on the way, ‘Tantei Opera Milky Holmes!”

Sorry for the long wait, Milky fans!  ･ﾟ･（ﾉД`）･ﾟ･
I last looked at Elly back in August, so it’s been four months since the last Nendoroid release! I would also like to point out that I am one of those Milky fans! 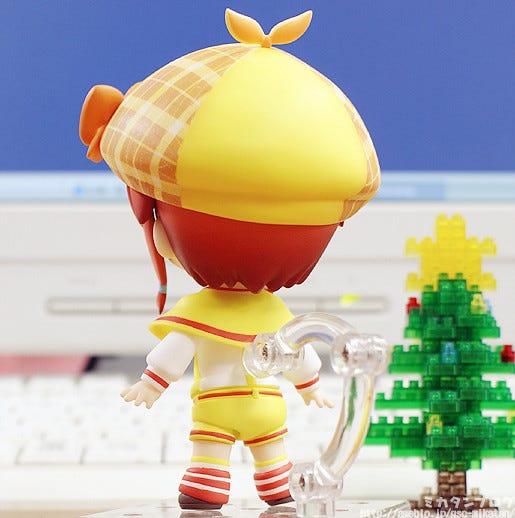 She is the only Milky Holmes member that is wearing shorts!! Nero is in fact the only one of the girls that really shows off her thighs!  Her legs are connected by ball joints which really work nicely with the shorts and allow for all kinds of poses! 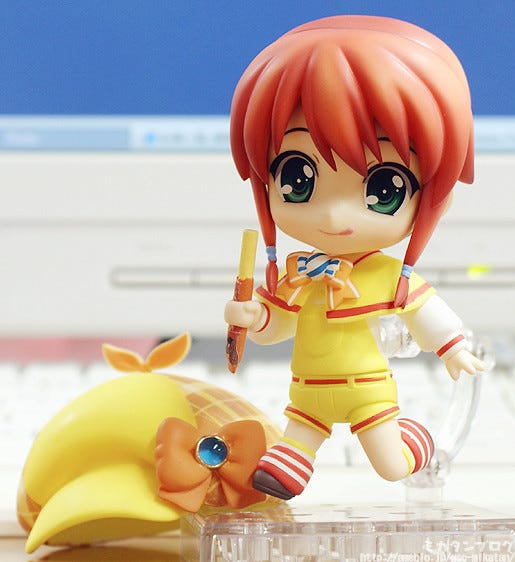 I’m sure I don’t even need to say it, but…
The hat is of course removable!

I also don’t think I need to tell you that Nero looks super cute without her hat! :P She also comes with bent legs as you can see in the picture – they let you add a nice dynamic running feeling like this! 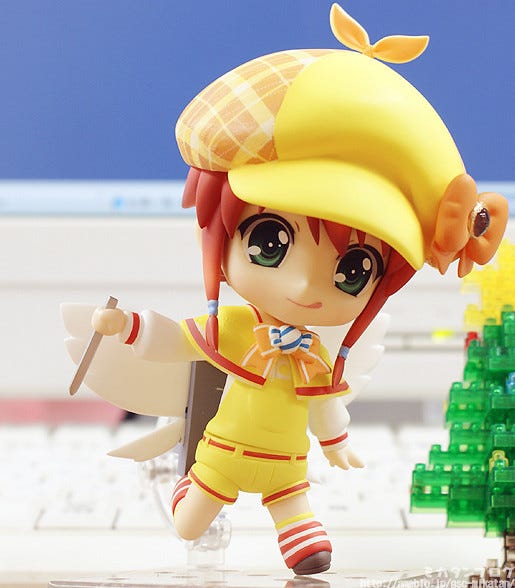 The flying machine from the last episode!

The flying machine that Twenty was using in the last episode of season 1 is also included! Plus it can also be equipped to other characters! I must say I really loved Twenty in the anime series… he was such a pervert. :P 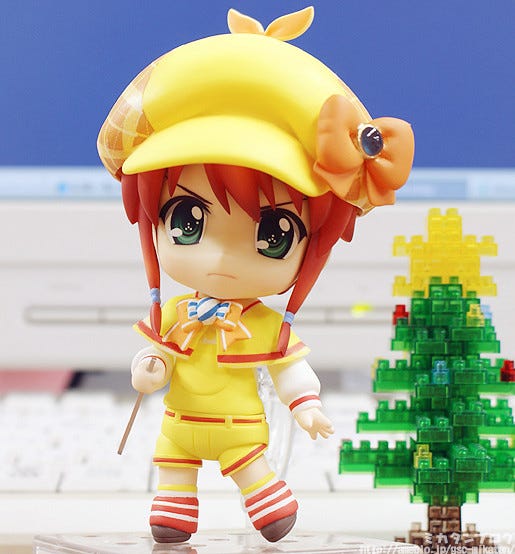 You can’t have a Milky Nendoroid without…
A Toys Expression!

As with all the previous Nendoroids from the series, she also comes with this lovely expression! For those unfamiliar with the series – each of the girls have a special power called their ‘Toys’, and when they use these powers their eyes start to kind of sparkle like this!
Nero also comes with the metal rod she uses for her ability!
Nero’s ability lets her control any electronic equipment!

All the previous Milky Holmes Nendoroids have had some really unbelievable optional parts… what about Nero!? 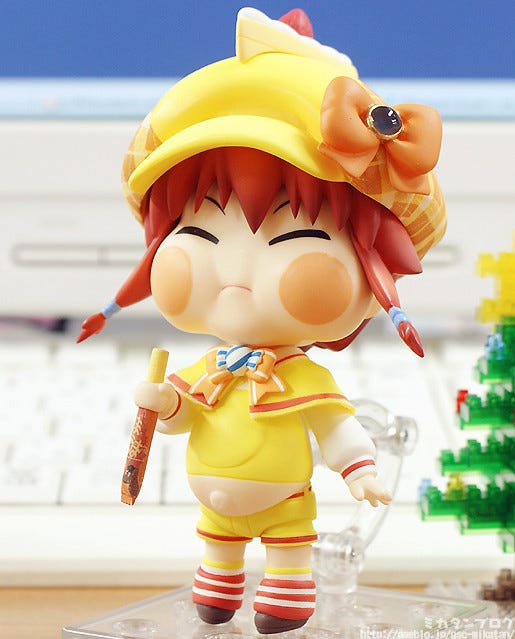 Possessed by her ancestor!

Just as I expected! :P When I saw the parts that came with Elly, I wondered if the same would come true for Nero… it really did! A quick summary of the parts here:

I’m not quite so sure how much this actually represents Nero Wolfe, but I do know that that face is absolutely adorable! :P I can’t try right now, but later on I think I’ll try using this expression on some other characters!! 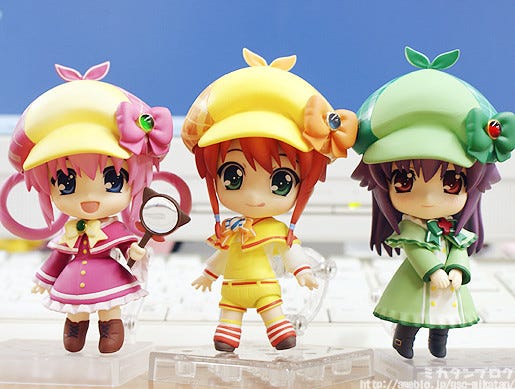 The three members lined up together!

They really look great all lined up together! The Milky colors are so vibrant – they’ll really brighten up any figure collection!

Nendoroid Elly will be sent out from GSC on the 15th December! The quick stores should have her up on the day after, so preorder your Nero and grab your Elly at the same time!

For preorder or sales info, be sure to check out our partner shops! 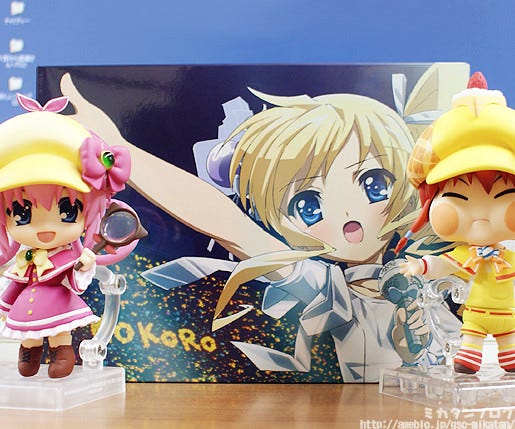 By the way, the Blu-Ray that was mentioned at the start of this article…

Is a Summer Special that precedes the second season of the anime series! It’s also got a load of great extras and is on sale right now, so if you’re a Milky fan do consider grabbing it as well!


Anyway, that’s all for today.
I hope to see you all again tomorrow!! (・∀・)ノ゛