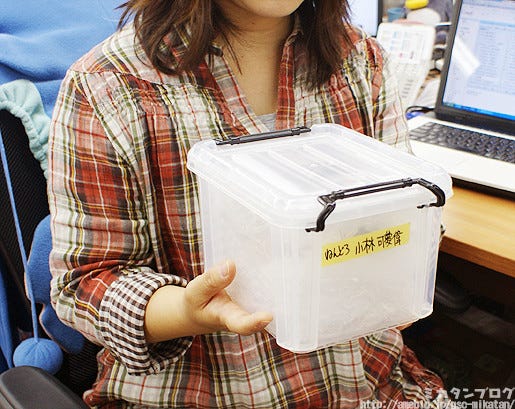 The staff that went to Paris returned yesterday!

They were attending an event called the Paris Manga & Sci-Fi Show 12, but have now returned to Japan once more! Welcome home everyone, I’m glad you’re all back safe!

All the prototype figures that were on display there have also safely made it home, so let’s get started with playing with some of them… including this one over here! 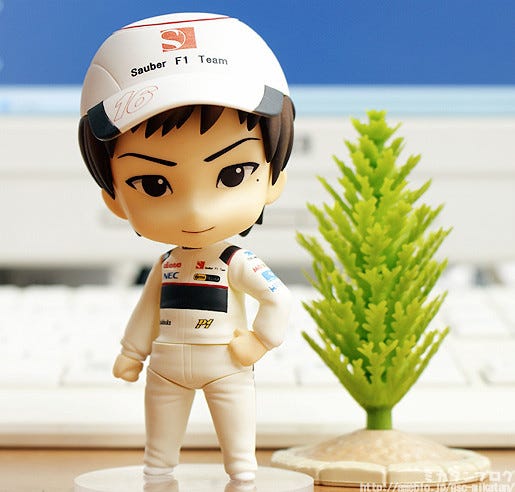 Kamui Kobayashi is a famous F1 race driver with an impressive track record… and now he is joining the Nendoroid world as well!

I know some of you might be a little surprised with this Nendoroid!

I’m sure a lot of you know about GSR&Studie with TeamUKYO, and their Miku car, but Good Smile actually has a whole division called Good Smile Racing that is working hard in the cars and racing side of things!

We even sponsored Kamui for his races this season!  ヾ(ﾟдﾟ)ﾉ゛

I hope that racing fans will be able to appreciate the figure just as much as figure fans will! 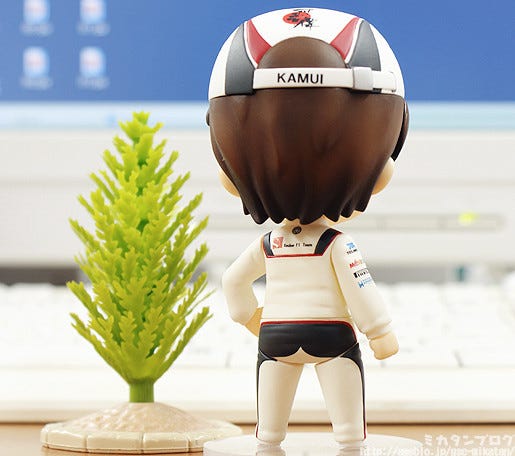 Kamui always looks so relaxed and ready for anything during his races, and the Nendoroid shows that off really nicely! 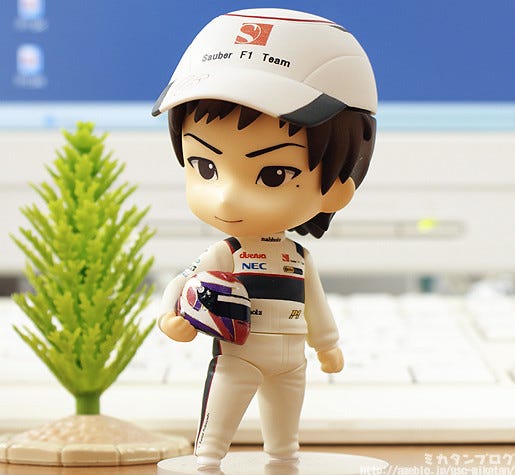 Let’s move onto the optional parts!
A helmet and arm to hold it!

Kamui is always ready to race with his helmet right by his side – this pose really gives off that feeling! 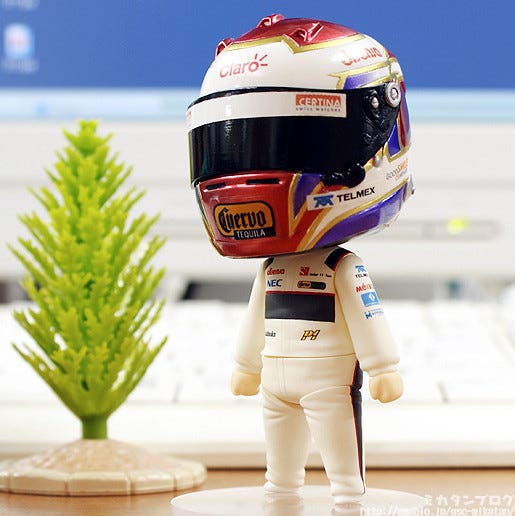 He also has a helmet he can wear!

Now that’s what I call a very detailed Nendoroid extra!! :O
Even as a Nendoroid you can have Kamui wearing his helmet as if he is in the heat of a race – perfect for fans! 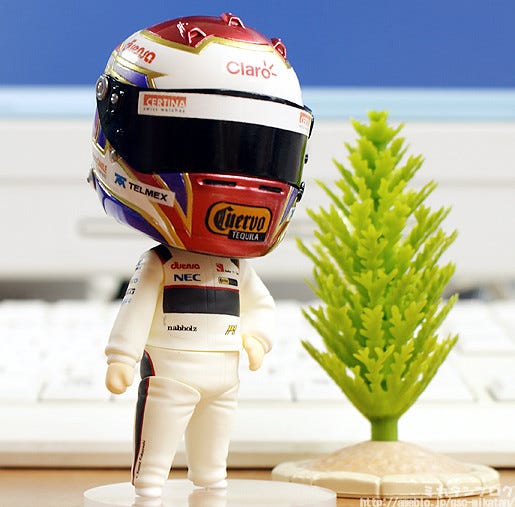 You can see the sponsor’s logos on his suit and helmet!

They’re so small! But you can definitely make each and every one of them out! The whole design is based on the actual outfit that Kamui wears – of course Good Smile’s logo is on there as well!! 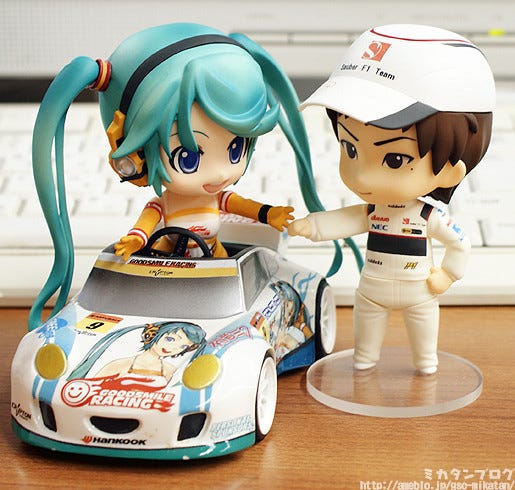 I also wanted to put a picture in here of Kamui just heading off to a race… but somehow the picture I took made it look like he was playing rock-paper-scissors instead, so I decided against it in the end. ^^;

Plus…
He isn’t only becoming a Nendoroid! 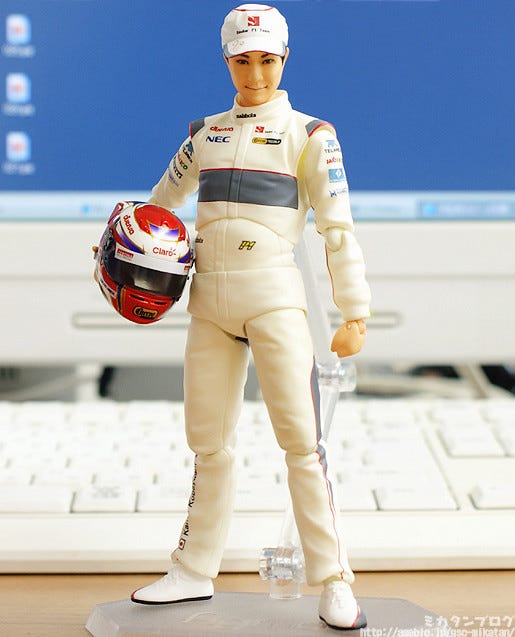 He is getting his very own figma rendition as well!!

But it should look just like him, as the sculptor in charge of this figma was none other than Hiroshi Sagae, who specializes in sculpting figures of real people! The body was all sculpted by Sagae, and then Masaki Asai worked on putting the figma joints in! 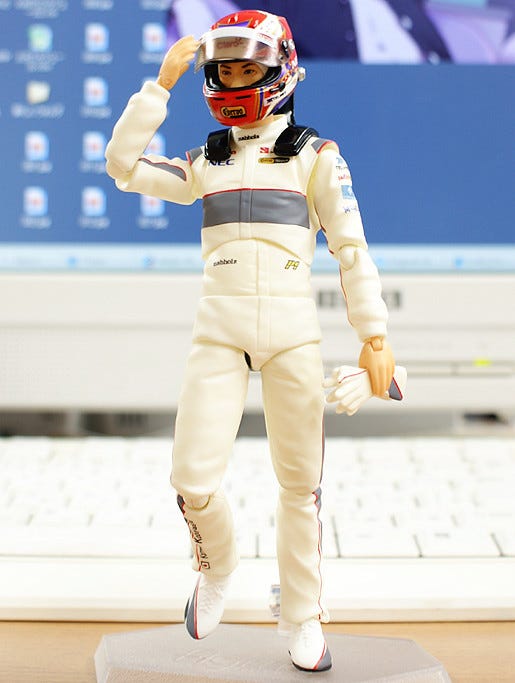 The figma can also wear his helmet!

When he is wearing the helmet and you look inside the visor you can see his cheeks are all squished up, it’s great!!! :P The visor lifts up just like a real helmet!

The HANS device (the black thing around his shoulders) is also included!
As with the Nendoroid, his outfit also has all the sponsor’s logos on, so it really is a faithful double to the original Kamui! It’s a bit strange to see a realistic figma like this at first, but it’s definitely still an incredible piece of work!

There are also some parts I didn’t show here, so check out the GSC website!

They are up on the GSC website today!
As always, speak with out partner shops for any preorder or sales information!


Anyway, that’s all for today!
I hope to see you all again tomorrow!  (・∀・)ノ゛