Tomorrow is the start of another long weekend! 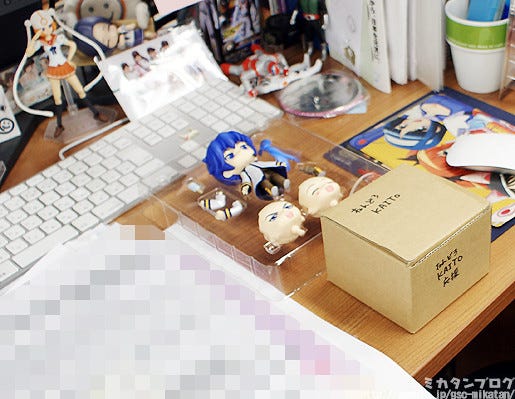 In preparation for the long weekend, everyone at GSC is hard at work to finish everything up! Amongst all the work, I spotted this interesting looking box on the design team boss’ desk!

That Momoclo photo on display is definitely rather interesting… but I think I’ll steal the box first, I can’t wait to see what is inside! 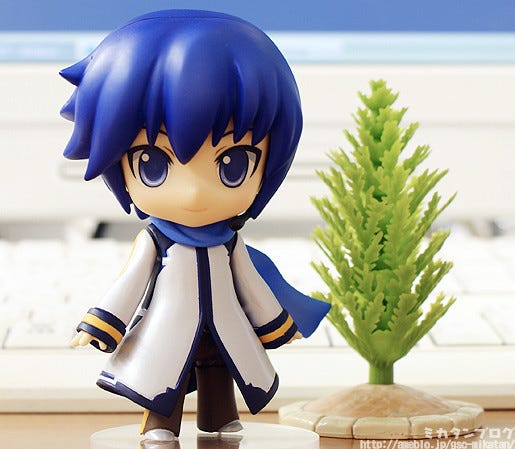 Inside was of course this lovely figure!

As I’m sure a lot of you may have figured it out already, but this is effectively a KAITO resale – he is coming back as a Cheerful! version!

For each figure sold, Good Smile will donate 1000JPY to aid relief efforts! 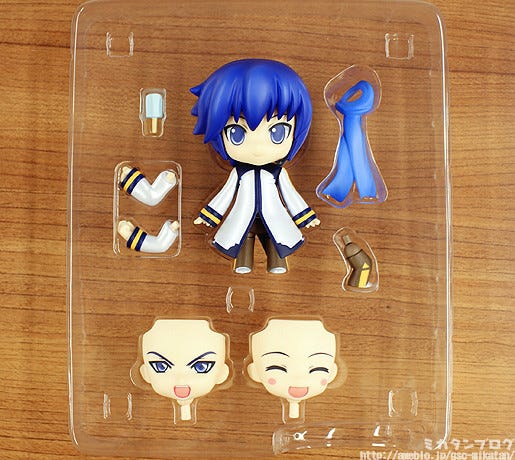 This is the original Nendoroid KAITO!

The Cheerful version includes all the expressions and optional parts that the original had!
The original KAITO was Nendoroid No. 58, he was first released in 2009/02! I can’t believe it was a year and a half ago that it first came out! 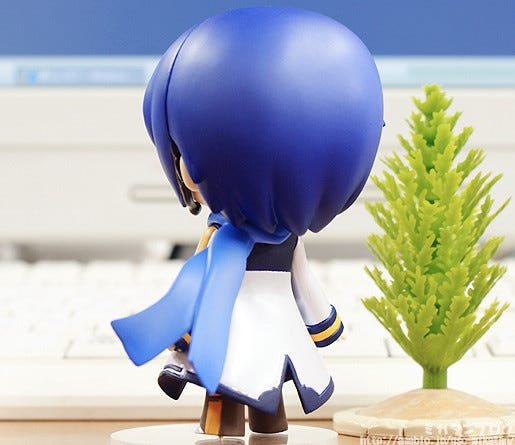 KAITO’s trademark scarf looks so cute in Nendoroid form! You can also turn the scarf to the front if you prefer! 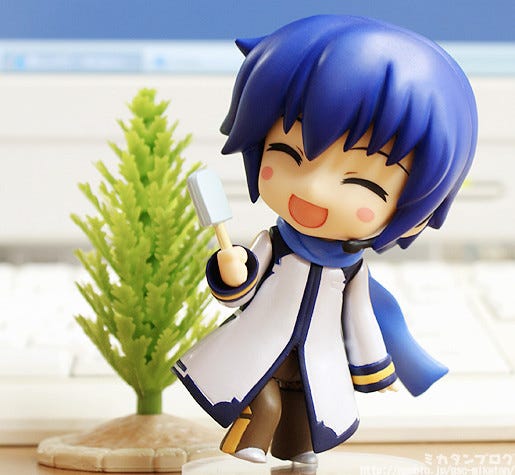 How much of my heart can you possibly steal, KAITO!!!? You’re just too adorable! I’m sure everyone who already has KAITO has loved using this expression with loads of other Nendoroids as well!

Plus, KAITO has to come with an ice cream!

It’s not an official thing, but KAITO has definitely become well known for his love of ice cream! He also of course comes with arm parts that let him hold it! 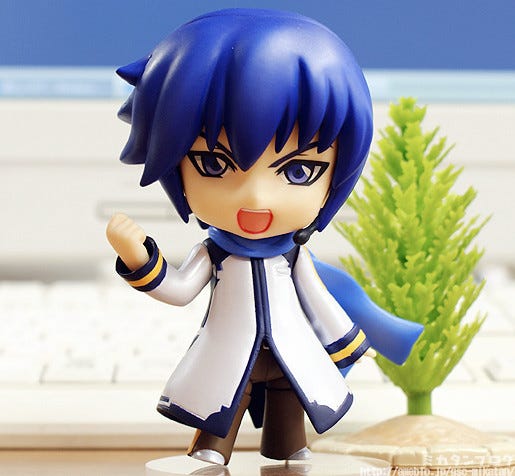 Plus the impressive, ‘Hero Expression’!!

A very different expression to the smiling face above, but this is also an expression that just can’t be left out! Parts to recreate the Hero pose are also included! 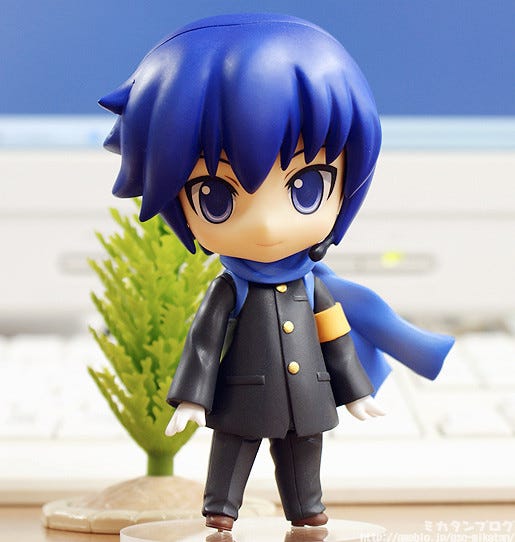 As you can see, the body has had a complete makeover for the Cheerful version!
The idea behind this was from Oono, and handled by Sacchan – the newbies at GSC are really doing wonderful things!!

All the female Cheerful versions have had cheerleader outfits, so this is definitely what KAITO needed to blend in with them! 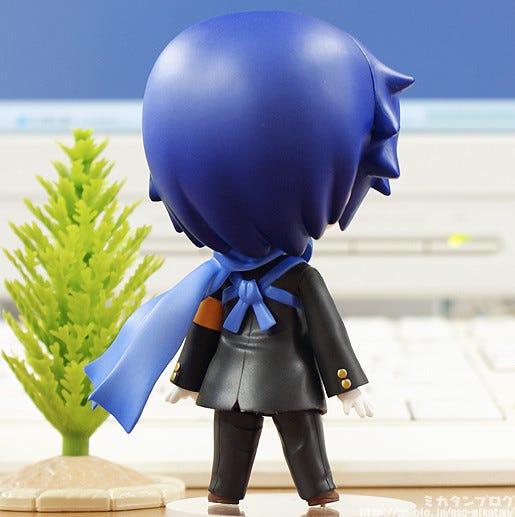 KAITO’s image color is of course the lovely blue, so a blue cord is tied onto his back! The orange armband is also a lovely touch! 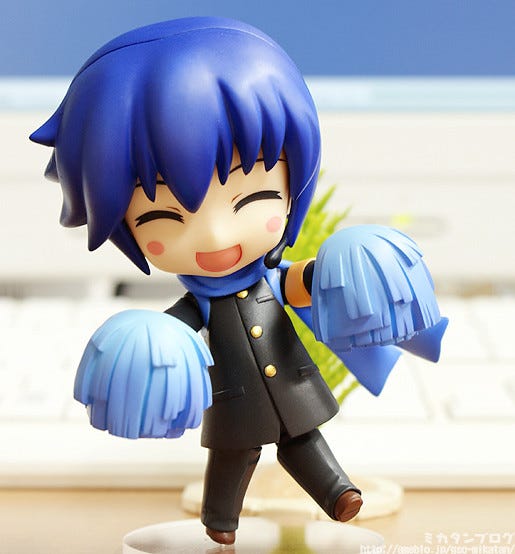 Pompons are included as with all Cheerful versions!
His pompons are a lovely bright blue – very suiting for KAITO!

They connect the same way as Cheerful Miku, Rin and Len – with a stub that connects to the arm! I know some people think pompons are girly, so that’s why I decided to give them to Miku instead. :P 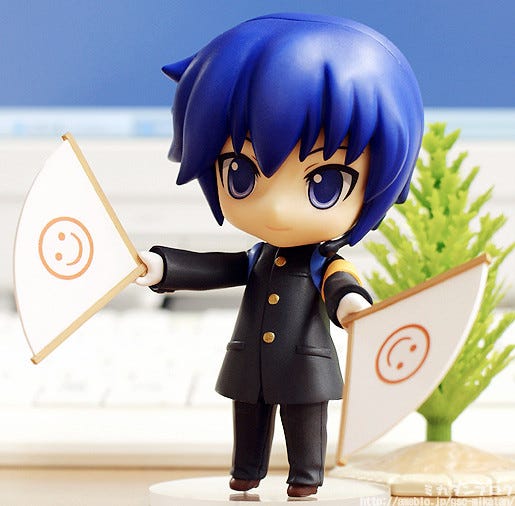 He also comes with folding fans!

You can have him hold both of them and he really looks ready to cheer on for everyone! I’d be glad to do my very best if I had KAITO cheering for me!

The hands for holding the fans are wearing white gloves!
There are standard hands as well, so there are all sorts of ways to pose him! 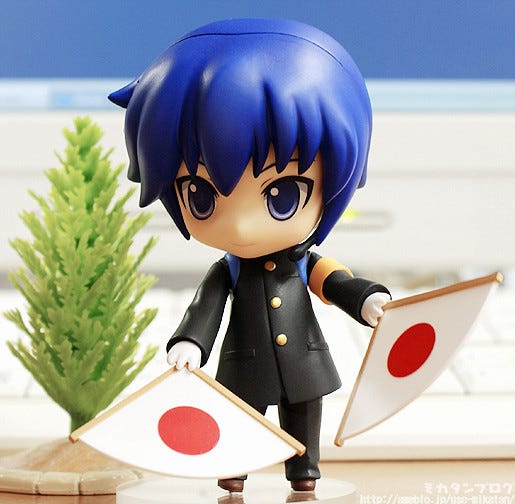 On the reverse side of the fans is the Japanese flag!

It’s been seven months since the disaster, but Japan is still far from what it was before the disaster… there are lots of people who are still having a very hard time. The Cheerful project has been going for a good six months now, and hopefully it has brought some smiles to the people who need it most. 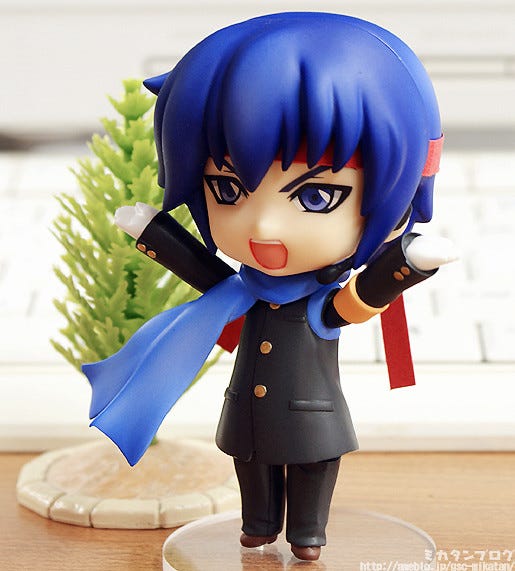 He also comes with a head band!

The headband needs to be tied yourself (double-sided tape works too), and it really adds even more to the cheering atmosphere!

He also has these cheering hands!
Both arms are lifted up into the air! 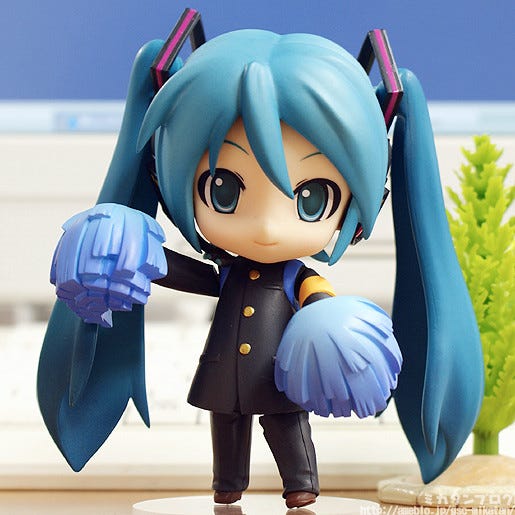 It’s really, really amazing! I love the standard Miku, but when I saw this my heart just melted! I never thought a girl would look so great in guy’s clothing… :P

■ He will cost 3000JPY. Shipping within Japan will be free of charge.
■ For each figure sold, Good Smile will donate 1000JPY to aid relief efforts.

Please note the following if you want to order:

Anyway, that’s all for today! I hope to see you all again next week!
Enjoy the long weekend if you’re in Japan!! (・∀・)ノ゛