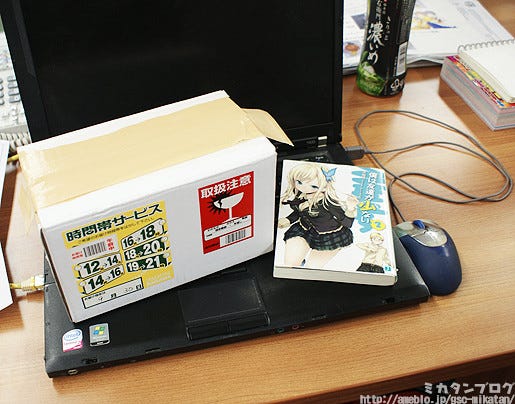 Trust Otanaka to get this figure ready just in time for the anime series! (Even if that was unintentional…) Let’s jump right in and take a look! 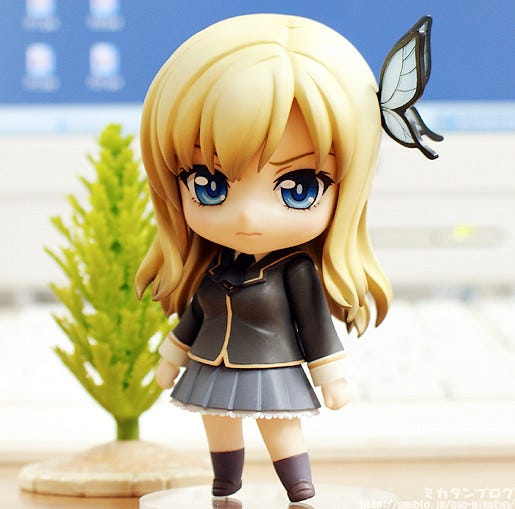 From the popular light novel series ‘Boku wa Tomodachi ga Sukunai’ comes a figure of the all perfect (besides her personality) Sena Kashiwazaki! The Nendoroid captures her stubborn and arrogant personality very nicely!

When I opened the box I was really surprised!

She really comes with all sorts of extras!! 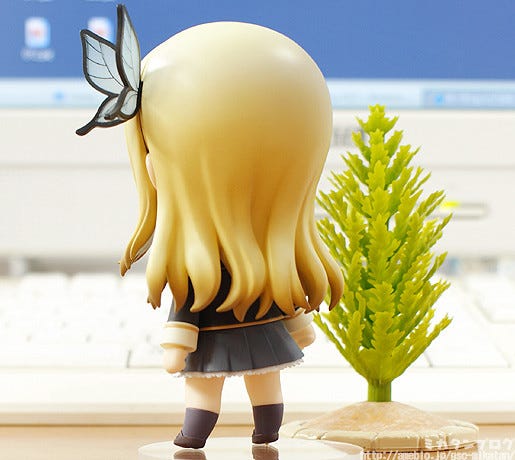 One of her trademark items is the butterfly hair accessory, which looks super cute in Nendoroid form! The petticoat that you can just see beneath her skirt is also a very high point for me! 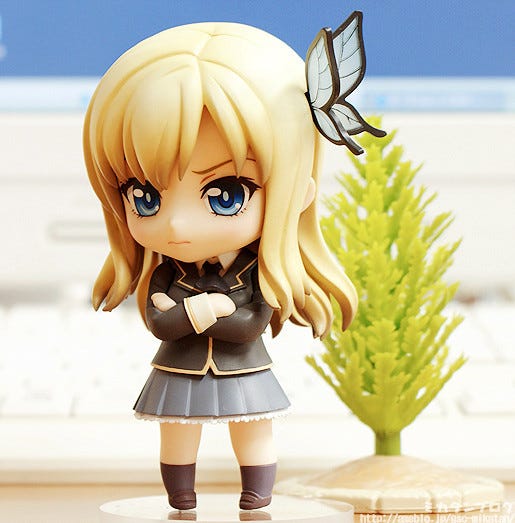 Let’s move onto the optional parts!
First up is folded arms!

These create a pose that really suits her personality, just like with Yozora. Combined with that annoyed expression it’s just perfect! 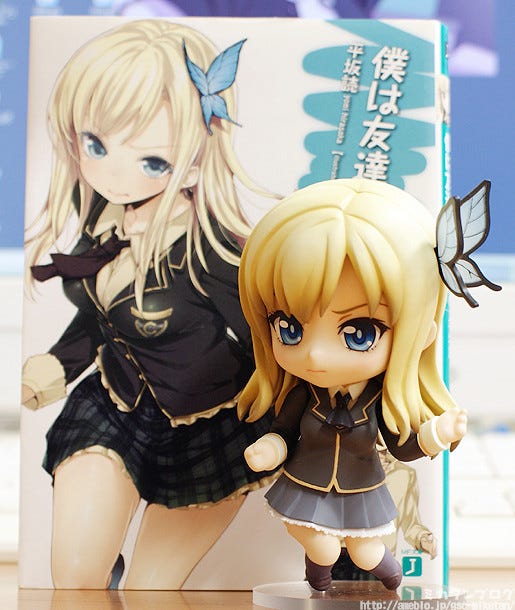 The pose from the 2nd volume!

Buriki’s illustrations are beautiful no matter how many times you look at them! These parts are included specially to recreate this pose!

Everything except her head and body is replaced! Obviously you could just use certain of these parts along with the others to create all sorts of original poses as well!! 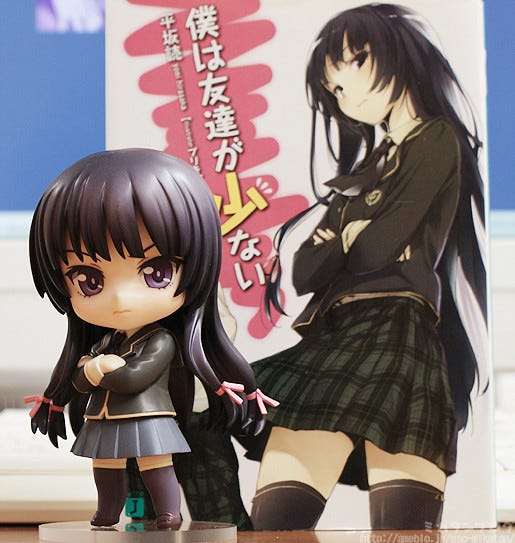 She has parts that let you recreate the scene from the first volume of the novel! Now you just have to display the two of them together!! :P 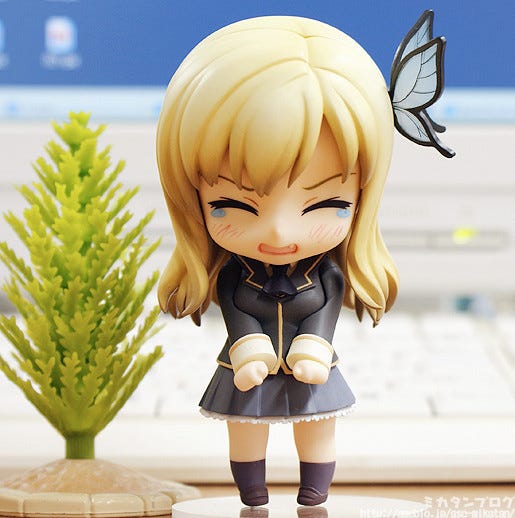 Anyway, let’s get back to Sena’s review…
Her first extra expression – a crying face!

Those who know the series will know that Yozora is always beating Sena, so that’s where this expression comes in! Isn’t she just adorable like this!?

She also has arms put out in front of her!

That pose really shows how very annoyed she is! Plus I must say that her nickname of ‘meat’ comes in here very nicely – these arm parts really bring out her breasts! :P  The expression is based on an illustration found in the chapter “A also want friends!” in the first volume of the novel. 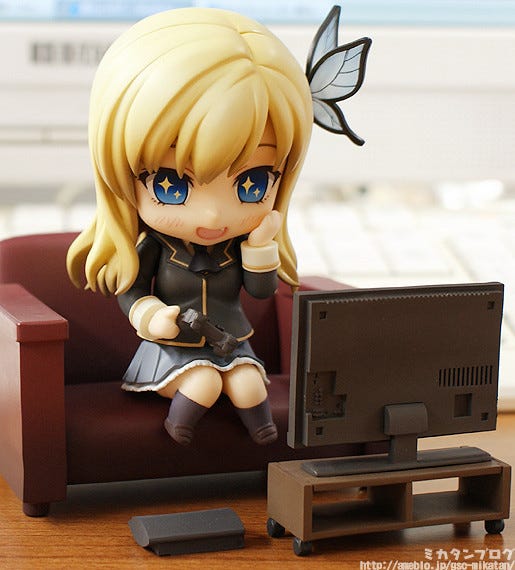 But there are even more extras to come!
She also comes with a starry-eyed face!

And what is it that makes her look so exited? Games of course! Even as a beautiful girl, she still loves playing dating sims and eroge! These parts really recreate the atmosphere of the Neighbor’s club!

Isn’t it incredible!? I told you she came with loads of extras! The sofa is included with Nendoroid Yozora as well, but Sena comes with her own one as well! 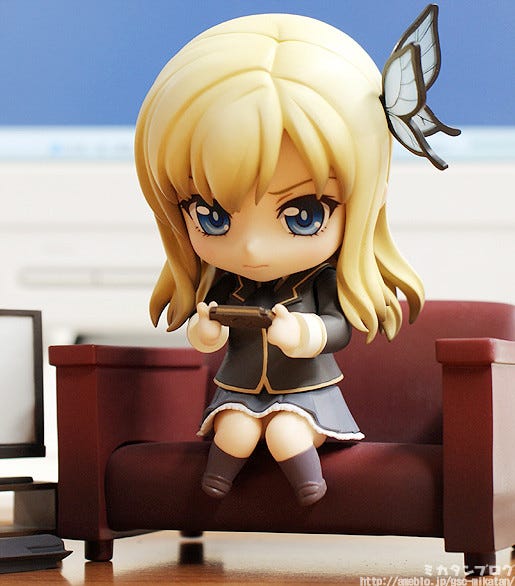 We’re not done yet!
A Playstation Portable and hands to hold it!

A portable gaming system as well! It can also be held in both one, or two hands depending on the situation you want to create! 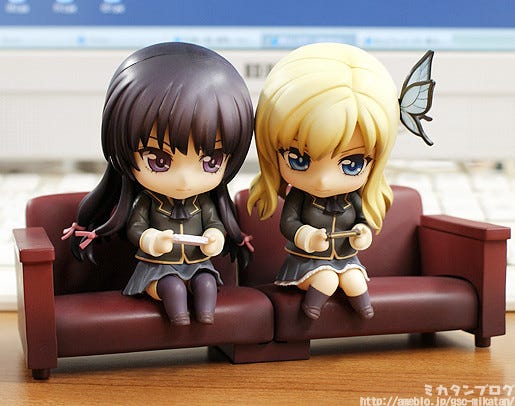 It is indeed!
You can combine it with Nendo Yozora’s sofa to make one long sofa!

That’s such a nice gimmick! Now it’s even more like the Neighbor’s club clubroom. 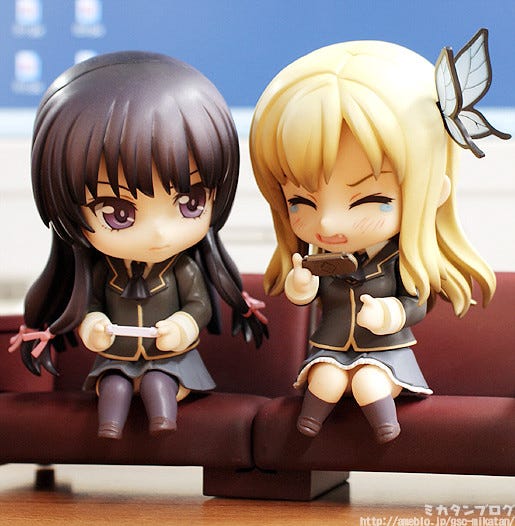 Once again… her crying face is so adorable!

Completely unrelated, but I was searching all over for Nendoroid Yozora’s expressions and shouldn’t find them anywhere. I got a bit worried and asked around – it seems they’ve already flown off to China!

I was really sad, as I wanted to use her on the blog… but Tsukki saved the day!

Good job, Tsukki! I’m so glad I could include her in this blog!

She’ll be on the GSC website shortly!
For preorder and sales information, please contact out partner shops! 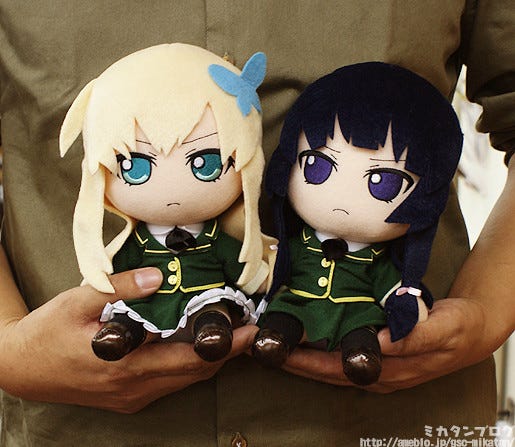 Gift is making plushies from the series as well!

You can get both Sena and Yozora in plushie form! They both have that upset look on their face!!  If you like the series be sure to check these as well!