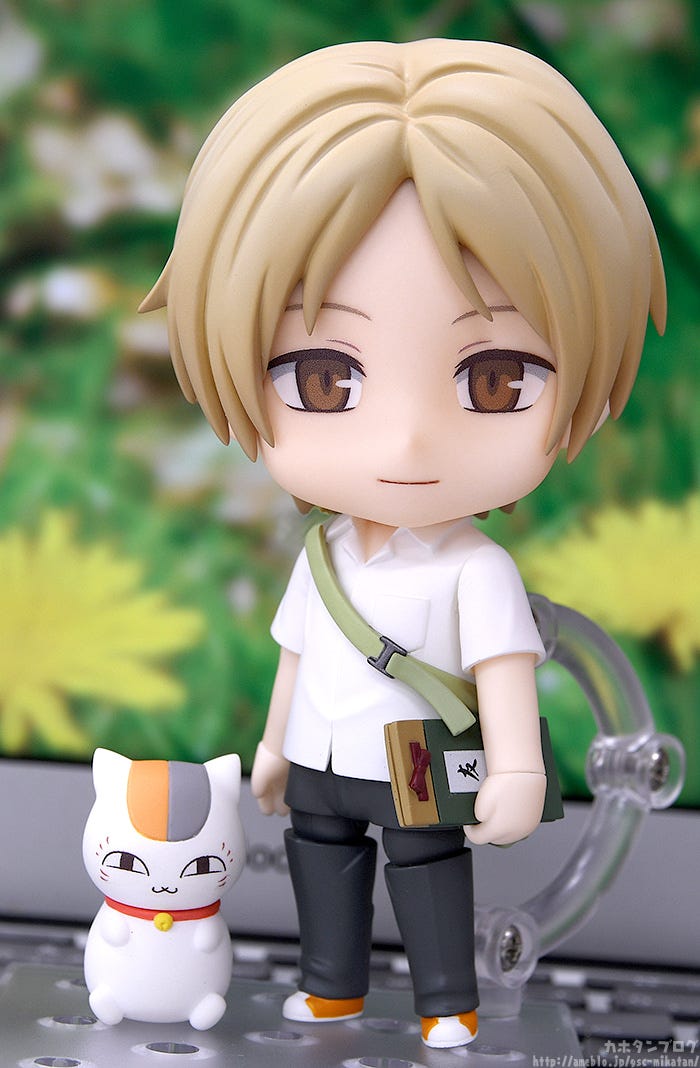 From the popular anime series “Natsume Yujin-cho” comes a Nendoroid set of the protagonist Takashi Natsume and Nyanko Sensei! Takashi comes with his gentle standard expression, his smiling expression and his expression from when returning the name of a Yokai. Nyanko Sensei has been recreated in adorable chibi form.

“One who protects me, show your name.”

Nyanko Sensei sits independently! He looks great on the base, but if you can get the balance right, you can pose him in all kinds of places! ▲You can see the Book of Friends he received from his grandmother has also been carefully recreated!

Just like Takashi, Nyanko Sensei has been artfully brought into Nendoroid style, giving him an adorable chibi look!( ⸝⸝•ᴗ•⸝⸝ )੭⁾⁾ ▲His tail is so cute!

Bent leg parts are included so you can pose Takashi chasing after yokai! ♪ ▲The flap of the bag appears slightly windblown, making it perfect for poses like this! ( ・ㅂ・)و̑ ▲A left hand part to pose him carrying the Book of Friends is also included! ◎

In addition to his standard expression face plate shown above, an expression from when he returns the name of a yokai is also included! ▲Recreate the memorable scenes of him putting the paper from the Book of Friends in his mouth! A special support arm for the open version of the Book of Friends is included! ▲The support arm attaches directly to the Nendoroid base! ((｀・∀・´))

As for his third face plate, it’s his smiling expression! Use it with the included bent arm parts and Nyanko Sensei to show Takashi holding him! Have fun creating various poses of Takashi and Nyanko Sensei together! Available for preorder from the 28th of November!

Preorders for many products at the GOODSMILE ONLINE SHOP are closing soon! Here are the products closing the 05th December 2019 (Thu) at 12:00JST!

Preorders for many products at the GOODSMILE ONLINE SHOP US are closing soon! Here are the products closing the 05th December 2019 (Thu) at 12:00JST!