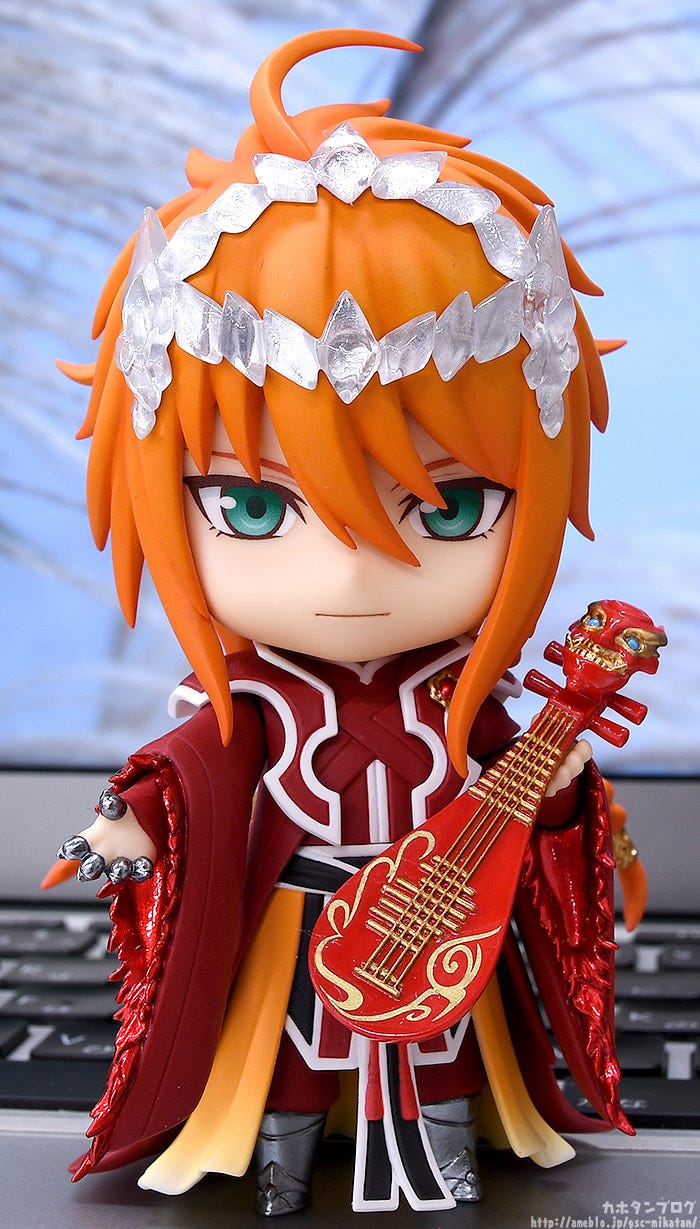 From “Thunderbolt Fantasy -Bewitching Melody of the West-” comes a Nendoroid of the bard with the devilish singing voice, Rou Fu You! He comes with two face plates including a standard expression, a chibi expression based on the character drawn by Yuupon as well as an expression based on the actual glove puppet used in the series! His biwa Ryou Ga is included as an optional part. Be sure to add him to your collection!

The bard from Seiyu. Gradation has been added to his outfit to recreate his original design! ( ・ㅂ・)و̑

The brooch on his chest, his earrings, and even the plectrums on his fingertips to play his biwa have all been carefully recreated! By the way, his three braids are all jointed, making for easy posing! ▲I like how they have a subtle windblown look to  them! ( ⸝⸝•ᴗ•⸝⸝ )੭⁾⁾

His biwa Ryou Ga has also been recreated in Nendoroid size! Since you can’t see it on the product page on our site, let’s check out the back here! Special hand parts to hold Ryou Ga are included for both hands, so you can pose him either playing it or simply holding it in his plucking hand! As is standard with the Thunderbolt Fantasy Nendoroids, a face plate based on the chibi expression of illustrator Yuupon’s illustration of Rou Fu You is included!

A face plate based on the actual glove puppet used in the series is included as well! ▲(Such a mysterious gaze!) ▲Not just beauty, you can also feel his determination too.

Have fun using his different expressions to create all kinds of situations! ₍₍(∩´ ᵕ `∩)⁾⁾ Preorders for many products at the GOODSMILE ONLINE SHOP are closing soon! Here are the products closing the 05th December 2019 (Thu) at 12:00JST!

Preorders for many products at the GOODSMILE ONLINE SHOP US are closing soon! Here are the products closing the 05th December 2019 (Thu) at 12:00JST!