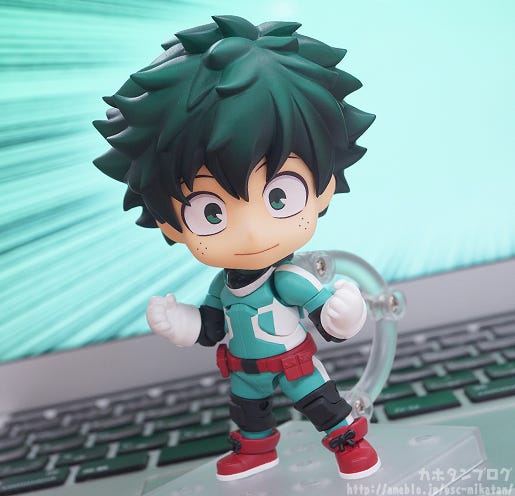 The following blog is from the original release in 2016. From the popular anime series ‘My Hero Academia’ comes a fully articulated Nendoroid of the main character who dreams he will become a hero – Izuku Midoriya! He comes with three different face plates including a standard gentle expression, a hesitant crying expression as well as a combat expression for when he decides it’s time to be a hero!

His unique green jumpsuit has been faithfully shrunk down into Nendoroid size and he also comes with special glove parts to pose him using his ‘One For All’ Quirk. A ‘SMASH’ sound effect plate is also included to bring even more life to his action poses! Recreate your favorite scenes from the series!

From the popular anime series with a second season on the way ‘My Hero Academia’ comes a Nendoroid of the hard working main character who aims to become the greatest hero of them all – Izuku Midoriya! His pointy hairstyle and unique hero costume down to the overly large red shoes have all been faithfully converted into Nendoroid size! ♪ The Nendoroid is also an addition to the ‘Edition’ series of Nendoroids, which means he features joints in his elbows, knees, hips and chest for a fully articulated Nendoroid experience! Perfect for all the action poses that are sure to suit him best!! (●‘∀‘●)ﾉ”

The plump appearance of his gloves and shoes has been preserved so perfectly! It just adds even more cuteness to the Nendoroid design!! The shoulder is fitted with a ball joint while the upper arm has a hinge joint which allows for all sorts of different action poses that gives the Nendoroid a huge amount of playability! ★

He also comes with this combat expression which makes the action poses even more exciting! Using the included Nendoroid stand you can also pose him jumping through the air for a more dynamic pose!

Plus he also comes with a ‘SMASH’ Sound Effect Plate and Punching Effect Parts! The clenched teeth and focused eyes show his determination and strength!! The confident side of ‘Deku’ has been captured so nicely with these parts!! ♡

However! There is another side to his personality that is also a part of ‘Deku’ that simply had to be added to the Nendoroid!!

He also comes with a hesitant, Crying Expression! ▲ The wobbly lines of his mouth are so perfect! You can recreate Izuku’s resolve to sacrifice himself if it means saving others! The determination to become a hero no matter what the cost!! It’s not just any crying expression, it has so much built-up behind it and you can see it all in his eyes!! Just remembering this scene makes my eyes well up with tears!!

Enjoy all the different sides of his character by adding the Nendoroid to your collection!

Be sure to check the official Good Smile Company website for more details tomorrow! (・∀・)

In addition, figma Izuku Midoriya is also going up for preorder tomorrow!! Be sure to check them both out!!

Fans of My Hero Acedemia also have more figures to look out for in the future as well! These two have already been officially announced and are sure to look great with Izuku! ♪