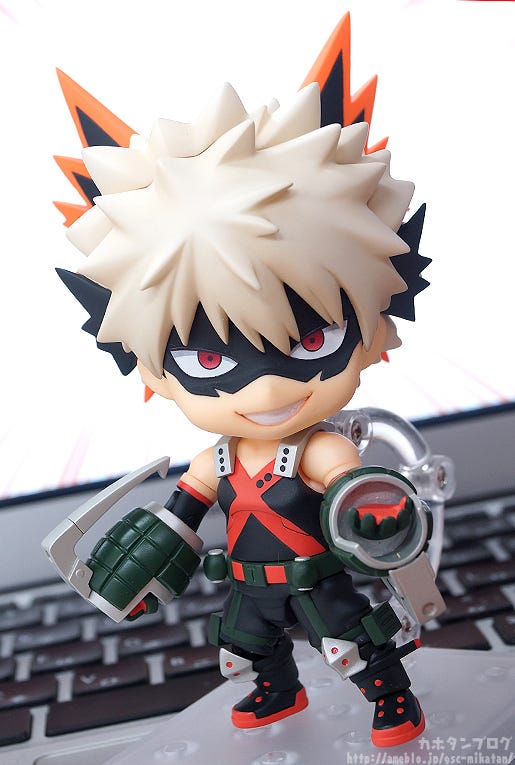 The following blog is from the original release in 2017.

Today’s munchies are Detroit Smash Gummies! They are so delicious! Anyway, today I’m going to be taking a look at… From the popular anime series ‘My Hero Academia’ comes a fully articulated Nendoroid of the main character’s childhood friend and rival – Katsuki Bakugo! He comes with three face plates including a confident standard expression, an aggressive combat expression as well as a sullen glaring expression.

His unique outfit that he calls ‘Full Body Dynamite’ has been faithfully converted into Nendoroid size, and effect parts to recreate his ‘Explosion’ quirk together with a ‘BOOOM’ text plate are included to bring his Nendoroid action scenes to a whole new level! Recreate your favorite scenes from the series and more!

The student of U.A.’s Class 1-A with incredible power, speed, intelligence and combat sense – Katsuki Bakugo is joining the Nendoroids wearing his hero costume! Just look at that provocative grin on his face! He looks ready to take on anyone, and I can just imagine his determined lines playing through my head!! (/ω＼)

The unique design of his ‘All Body Dynamite’ outfit has been very intricately sculpted, ensuring even smaller details on the arms, hips and legs have been faithfully included! Just like the previously announced Nendoroid Izuku Midoriya: Hero’s Edition he is a fully articulated Nendoroid! You can pose him with chest bent to the side allowing for many more dynamic poses, and his knees and elbows are also fitted with joints making it easy to create epic combat scenes! ♪

Another thing to note is how faithfully his hairstyle has been recreated even in Nendoroid size! Definitely one of the more unique Nendoroid hair parts! Allowing you to pose him in mid-combat! ▲ Making use of the Nendoroid stand you can pose him as if jumping or floating in the air! ♪

Along with the expression above, he also comes with this rather maniacal combat expression! (∩・∀・)∩ His first expression was already a little cocky, but this takes it to a whole new level! Look at the bloodshot eyes and the aggressive laugh!

Plus he also comes with more parts that help to recreate his ‘Explosion’ quirk – both exploding effect parts as well as a ‘BOOOM’ text plate! Combined with the combat expression it really captures his heated battles perfectly in Nendoroid size!! (｡･ω･)ﾉﾞ

The text plate really helps to bring out that comical atmosphere of the series!! He also comes with an alternate left hand with holding a grenade pin to pose him as if he has just pulled the pin and is waiting for the explosion! ♪ ▲ The safety levers on his grenade arms can also be slid out! ▲ Nendoroid hands are so small… making the pin tiny!

Last but not least his third face plate… Plus as I’m sure you’ve noticed this expression is not wearing the mask of his hero costume instantly creating a rather different atmosphere! Lovely!! In addition to the expression he also comes with interchangeable hair parts to pose him with his normal hair instead! ★ ▲ Enjoy his normal spiky hairstyle too! ♡

Unfortunately Nendoroid Izuku Midoriya: Hero’s Edition is currently off on a trip to China so I wasn’t able to pose the two of them together, but I look forward to having both of them displayed together!! Enjoy all sorts of different poses with the adorable Nendoroid of Kacchan!

Be sure to check the GSC Site for more information around noon JST tomorrow! I’m looking forward to the upcoming second season of the anime! Take a look at the trailer below!

Lots of preorder deadlines are coming up for products at the GOODSMILE ONLINE SHOP!ヽ(ﾟ∀ﾟヽ 三 ﾉﾟ∀ﾟ)ﾉ The following products also comes with a GOODSMILE ONLINE SHOP Exclusive Bonus, so don’t miss out on them!!