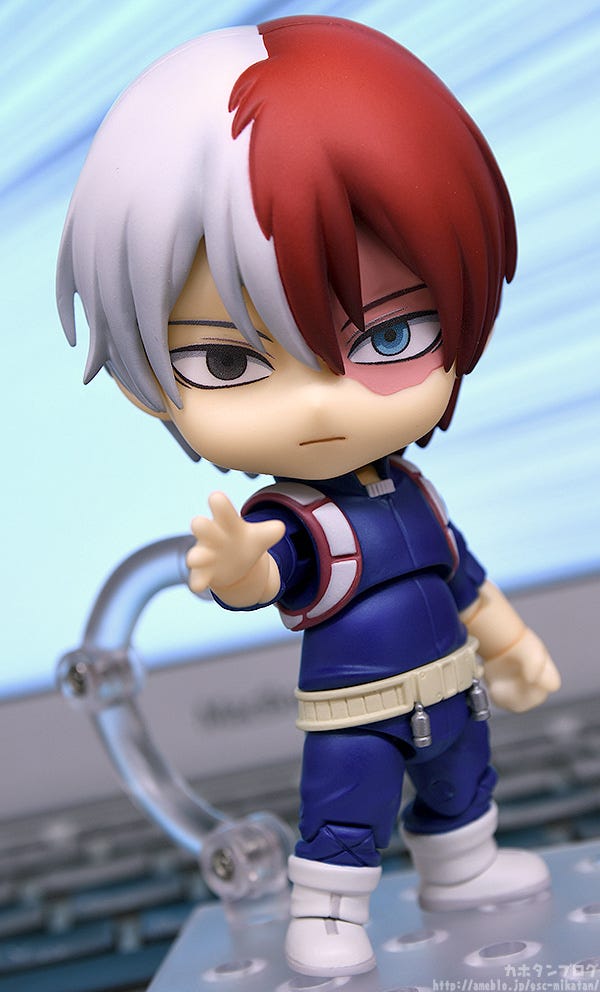 “It’s not your fault. We’re just playing on different levels.”

From the anime series “My Hero Academia” comes a Nendoroid of the U.A. High School student from Class 1-A, Seat No. 15: Shoto Todoroki!

His half-red half-white hair and uniquely different eye colors have been carefully recreated in Nendoroid form! ▲You can see some more detail from the back!

Moreover, the Nendoroid is fully articulated, allowing you to display him in a variety of action poses! ◎ ▲An Ice effect part for his hand is also included! As was included with the previous two, a text plate, this time featuring the word “CRAASSH”, is also included! ▲A special support arm is included making it easy to use when posing him! I want to draw your attention to his feet real quick! These parts are made with translucent materials, making for a truly icy appearance. ▲It fits right on the base!

As for interchangeable face plates, he also comes with his combat expression! ▲Those glaring eyes and clenched teeth look so cool!

In order to recreate his Quirk, ‘Half-Cold Half-Hot’, use both the previously introduced ice effect part and the included fire effect part! The gradation of the fire effect part is incredible!

Have fun recreating scenes from the series and your own original poses with these parts! ◎

Finally his third expression is his smiling expression! The smile from when he began to accept the Quirk he inherited from his father, Endeavor, as his own power.

(The slightly downward look of his eyes is a key point of this face plate!)

You can definitely feel a gap between this expression and his standard one! ▲It’s even easy to create sitting poses like this using the support arm!

Available for preorder from the 11th of April (Thu)! Keep an eye on the Good Smile Company official site tomorrow around 12pm JST for details on ordering these three!

For the first time, international customers will also be able to preorder these Nendoroids from the GOODSMILE ONLINE SHOP, so be sure to follow our English Facebook, Twitter and Instagram to be notified when preorders become available!

*Due to licensing constraints, this product will not be available for shipment to South Korea. We appreciate your understanding.

Preorders for many products at the GOODSMILE ONLINE SHOP are closing soon! Here are the products closing 11th April 2019 (Thu) at 12:00JST!