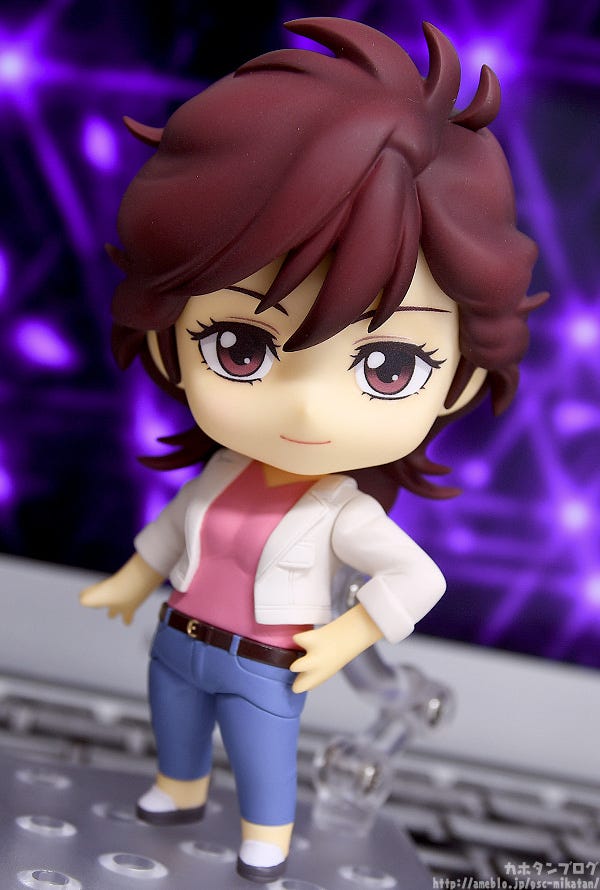 Have you ever been to Shinjuku station? It’s like a labyrinth in there! I can never find the right exit! From the anime movie “City Hunter the Movie: Shinjuku Private Eyes” comes a Nendoroid of Ryo Saeba’s partner, Kaori Makimura! She comes with three face plates including her standard expression, her angry expression and her exasperated expression. For optional parts she comes with her gun and 100t hammer.

Particular attention has been taken to the proportions and articulated joints. Display with Nendoroid Ryo Saeba (sold separately) for even more fun! Be sure to add her to your collection!

Her sporty and tomboyish outfit, cheerful expression and voluminous hair style have been recreated in Nendoroid form!ヾ(´∀`*)ﾉ Rather than the typical Nendoroid joints, uniaxial joints are used at her legs to perfectly preserve her animated appearance and the clean look of her pants. The wrinkles in her top give her a somewhat realistic appearance not often seen in Nendoroids!

As for optional parts, she comes with the gun she received from her older brother Hideyuki Makimura. ◎ ▲It looks heavy, even at this size! ▲Kaori looks so cool with her gun in hand! ♪

In addition to her standard expression face plate seen above, she also comes with… She looks great posed running with it or slamming it down like in the above picture! ♪

As for her third face plate, it’s her exasperated expression! ☆ You can even create the scenes of Kaori when she is beyond angry at Ryo’s words to the point of total exasperation! (σ´□`)σ

Take a look behind her too, it’s a dragonfly plate! Using this you can easily recreate that classic expression from “City Hunter” in Nendoroid form! ◎

It comes with its own support arm, allowing you to recreate those speechless moments from “City Hunter” with any character!

When you go to preorder Kaori, be sure to check out the currently available for preorder Nendoroid Ryo Saeba for even more fun! ヽ(○´ω｀○)ﾉ ▲The two of them look great together! ▲They look great in comical situations too! The following item is also available for preorder! ((｀・∀・´)) “Are you the one that called me?”

From the anime movie “City Hunter the Movie: Shinjuku Private Eyes” comes a Nendoroid of the legendary sweeper known as City Hunter, Ryo Saeba! He comes with three face plates including his standard expression, a more comical smiling expression and a flustered expression. He also comes with his gun and a gun smoke effect.

Particular attention has been taken to the proportions and joints, allowing you to recreate cool poses with ease. Of course, City Hunter’s comical side is easily displayable as well!

Preorders from the GOODSMILE ONLINE SHOP available until the 14th of March (Thu) at 12:00JST!

Put your preorder in soon!