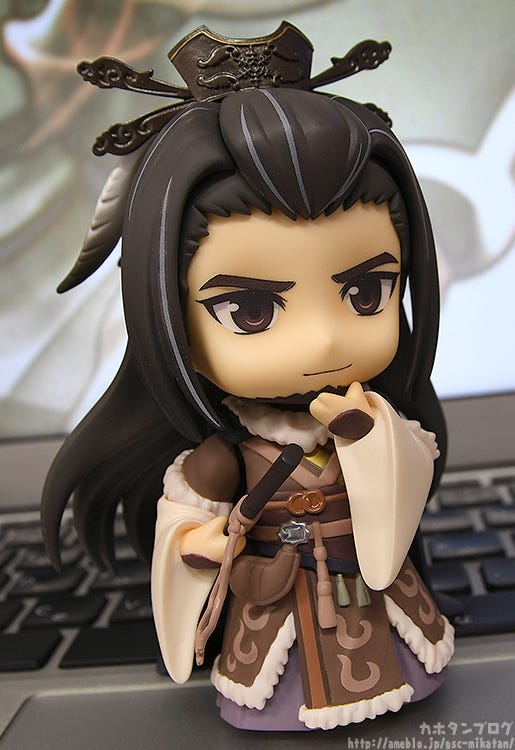 Optional parts include his dull-edged sword, his umbrella and the Maken Mokuroku scroll. Be sure to add him to your collection!

The vagrant swordsman who traveled from Seiyu to Tori, “Jin Muho”

Everything from his characteristic hairstyle to the fine details of his mild-colored outfit has been recreated with great care! ▲The metallic appearance of his hair decorations and the feathers in his hair are another feature! ( `･∀･´)σ

With the included interchangeable parts… …you can display him with his sword drawn, like this! His dull-edged sword, also known as Namakura Gatana, is included! As you can see, it is in fact quite dull! ( ・ﾉｪ・)

He also comes with his umbrella! ◎ Yes! This umbrella is based on the umbrella that was torn during the battle in the first episode! ( ；∀；)

There are other Nendoroids that come with umbrellas, but this might be the first ripped umbrella!

Based on the character illustrations by Yuupon, his chibi expression face plate goes quite well with the part, I think! ▲I love the spirals in his eyes! He’s so cute!

Same as with Nendoroid Lin Setsu A and Nendoroid Betsu Ten Gai, an expression based on the actual glove puppet used in the series is also included! While Sho Fu Kan’s standard expression shows off his dignified and friendly appearance, this one is more suited for when he is facing down enemies in battle! (∩・∀・)∩ ▲I imagined him reaching for his sword when I took this picture! A key of the series, the Maken Mokuroku is also included! ★ ▲The contents of the scroll are clearly visible!

In total he comes with these optional parts! Along with the included interchangeable arm parts, have fun displaying Nendoroid Sho Fu Kan in a variety of ways! Available for preorder from the 26th of December (Wed)!

Keep your eyes on the Good Smile Company official site for more details!◎