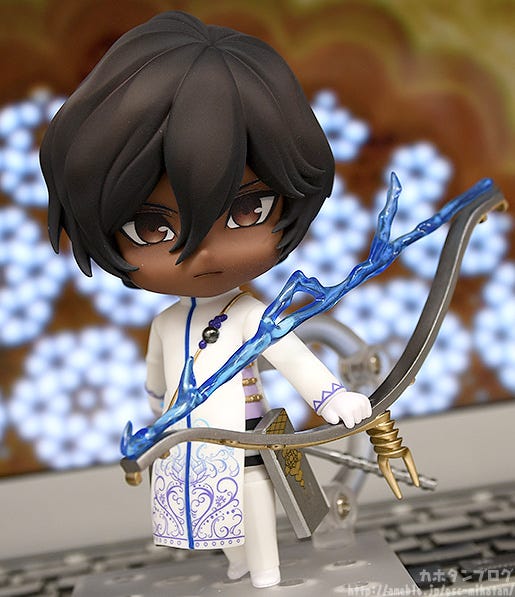 This time of year I always feel so luxurious when I put marshmallows in my hot cocoa. From the popular smartphone game “Fate/Grand Order” comes a Nendoroid of Archer-class servant Arjuna! He comes with three face plates including his dignified standard expression, a shouting expression and an expression as though saying his “Oh? Master, have you taken interest in me?” line from the game!

His Noble Phantasms Agni Gandiva and Pashupata are included along with various effect parts. Additionally, the Arrow for Karna he gave to his Master on Valentines Day is also included. Be sure to add him to your collection!

“Karna. To think we’d be in the same faction…”

Originally from the Indian epic “Mahabharata”, the legendary hero Archer/Arjuna from “Fate/Grand Order” has arrived as an adorable Nendoroid!

The diligent hero has been carefully brought down to Nendoroid size! ▲His soft-looking black hair has been sculpted in detail! ♪

His Noble Phantasm Agni Gandiva and arrows are included! Even the effect parts of the bow string have been clearly recreated! ◎ ▲The bow string parts can be removed, by the way!

As you can see, even the clasps on the sides of his outfit have been sculpted!♪ ▲It’s easy to enjoy his elegant appearance even in Nendoroid form!
ヾ(o´∀｀o)ﾉ

All Approved. By Shiva’s wrath, your life ends here… Effect parts to recreate Pashupata and… a shouting expression as well as arrow firing effect parts are included! (｀・ω・´)

Finally, on to his third expression! As though saying his “Oh? Master, have you taken interest in me? ” line in the game, it’s his smiling expression! That warm smile and soft gaze… he really gets my heart beating! ( ･ㅂ･)و ̑̑

It’s also fun to try to recreate their sprite appearances by viewing them from the side like this! ▲Special arm parts are included to show him with his hand up to his face like this! ◎

Finally let’s take a look at the last part. It’s the Arrow for Karna he gave to his Master on Valentines Day!

Those of you who saw Nendoroid Lancer/Karna probably guessed this part was coming…! In total, Arjuna comes with the following parts! ヽ(･ω･´(`･ω･´)ﾉ`･ω･)ﾉ Display with the now available for preorder Nendoroid Lancer/Karna for even more fun! (○´∀`)人(´∀`○)ﾉ ▲Or take more peaceful pictures of them together!

Use their optional parts to recreate all of your favorite scenes from the games and create your own situations too!