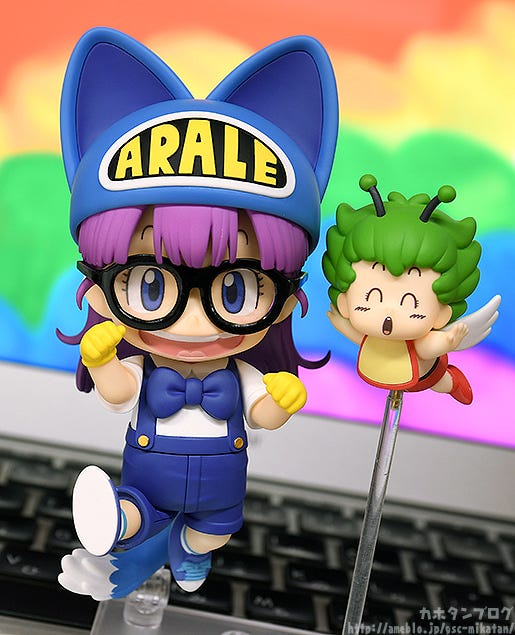 I switched from sleeping in my short sleeved pajamas to my long sleeved ones! October starts next week! From the anime “Dr.SLUMP ARALE CHAN” comes a Nendoroid of the android, Arale Norimaki in her cat ears outfit! Gatchan is also included as well! Her adorable costume is complete with an oversized bowtie and movable cat tail. She comes with two face plates including her energetic standard expression and a tongue-out expression.

In addition to her removable cat ears hat, she also comes with a hat with attached goggles! In addition to her classic “Ncha!” and “Kiiin” poses, you can pose her holding the candy optional part for even more display options. A Poop-Boy on a stick is included, which Gatchan can be posed holding! Poop-Boy is also removable from the stick. Be sure to add this new version of Arale to your collection!

From “Dr.SLUMP ARALE CHAN” comes a Nendoroid of Arale-chan, also known as Arale Norimaki in an adorable costume featuring her cat ears hat! ▲They’re both cute from the back too!

Continuing from Nendoroid Arale Norimaki, this is the second Arale-chan Nendoroid, but this time… Those squishy looking feet and hands and adorable round cheeks…!

Without differing from the original design, Gatchan has been brought down to Nendoroid size! *The prototype version is supported by a brass wire (actual product will differ)

Let’s get back to Arale-chan!

You can rotate her fluffy tail to get your favorite angle, making it great for posing! ε-(o´ω｀o) ▲Her cat ears hat is removable!

As for face plates, in addition to her energetic smiling expression shown above, ▲Have fun pairing this with the optional candy part!▼ Attached to Gatchan’s stick in this picture, Poop-Boy is also included and can easily be removed and posed just by himself! ▲Just look at that smile! Her hat with attached goggles! It looks like a hat for an airplane pilot! The gap between the hat and Arale-chan’s appearance is so cute! (・∀・)

The ends of the hat are made to appear in motion, so have fun using it while posing her in her “Kiiin!” pose!◎ ▲Enjoy posing her with your favorite one! The included hat with attached goggles and cat ears hat can both be used with the previously released Nendoroid Arale Norimaki as well! These kinds of interchangeable parts make for even more fun! ε-(o´ω｀o)

Be sure to add Arale-chan and Gatchan to your collection!

Available for preorder from the 2nd of October (Tue)!

Preorders from the GOODSMILE ONLINE SHOP will include a blank expression Gatchan as a purchase bonus! That’s right! One more Gatchan will be included! Preorders from the GOODSMILE ONLINE SHOP will receive two Gatchans!