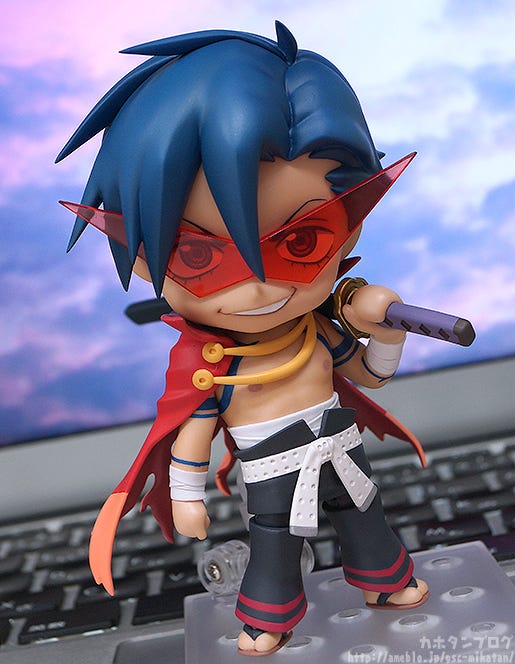 Today I’m going to be taking a look at…
Nendoroid Kamina! From the popular anime series “Gurren Lagann” comes a Nendoroid of Kamina! He comes with three face plates including a standard grinning expression that captures his personality perfectly, a shouting expression, as well as the famous “Later Buddy” expression. His iconic sunglasses are also include in both a solid and transparent version and his cape can be attached and removed allowing for all sorts of different display options!

In addition, his sword has been included with an oversized sculpt to capture the large appearance in the series and he also comes with alternate lower body parts to display him sitting, together with cockpit parts to display him as if seated inside the cockpit to completely recreate his famous last moment. Be sure to add the long-awaited Nendoroid Kamina to your collection!

From the anime series that celebrated its 10th anniversary last year, “Gurren Lagann” comes a Nendoroid of the charismatic and passionate bro, Kamina! … even the back of his cape and his impressively large sword have all been faithfully included on the Nendoroid’s design! ♪ He also features ball joints in his hips and ankles which allow him to be placed in the classic heroic looking pose above! (∩・∀・)∩

In addition, he comes with two different types on sunglasses – one translucent version that allows you to see his eyes, as well as this solid version! ★ ▲You can also display him with no sunglasses for even more variations!

His upper body has been sculpted while carefully keeping his muscular build in mind, which made for a sculpt with a much fitter looking appearance in comparison to most Nendoroids! ▲ I don’t think I’ve ever seen much manly arms on a Nendoroid before…!

As you can see, his cape can also be removed! ★ This allows for even more possibilities when placing him on display! Along with the different sunglasses, Kamina also comes with three different plates! The first is the standard grinning expression above, and the second is a shouting expression! ▲ I love the way his eyebrows have been done!

Before we look at this third face plate…

I managed to get hold of the planner, Tori Bird, and sculptor, Shashaki, to ask them about their personal highlights of the figure are! ٩( ᐛ )و Kamina’s upper-body is bare which is pretty unique for a Nendoroid, and made us focus on the muscles of the body. When he has his arm pointed to the heavens, you can see the deltoid muscle near his shoulder as well as his biceps nicely, really bringing out that manly appearance! The special arm that is included for the pose also creates a lovely curve from his arm down to his flank! Plus as you may have noticed, the size of the hand has also been made slightly larger to emphasize the pose even further! I really think it captures Kamina’s personality nicely, and I also really hope that this doesn’t have to end with just Kamina…!! The cape design was based on the original designs for the series, but we also wanted to pay respect to perhaps the most well-known Kamina figure there is, the Gurren Lagann Series Kamina by eyeup! The paintwork for the Nendoroid was in fact done by the exact same person who was in charge of the paintwork on eyeup’s figure, capturing the same blending of colors on the Nendoroid!

The way the colors meld into each other do look lovely!

But anyway, without further ado, here is his third face plate… A “Farewell, Buddy” Expression and a cockpit part!!

The complete set of part to recreate perhaps the most memorable scene in the series! (´□｀｡)

It really is a Nendoroid that has been made by those who themselves are huge fans of the series, and have not spared any details on the sculpt, paintwork or optional parts! I hope that fans will enjoy adding the Nendoroid to their collection and bringing out the world of Gurren Lagann right by their side!!

He’ll be up for preorder from the 22nd May!

Keep your eyes on the Good Smile Company Official Site for more info!

In addition, orders from the GOODSMILE ONLINE SHOP will include a Special Round Base as a bonus!! ★ Be sure to consider it when preordering!! ヾ(o´∀｀o)ﾉ