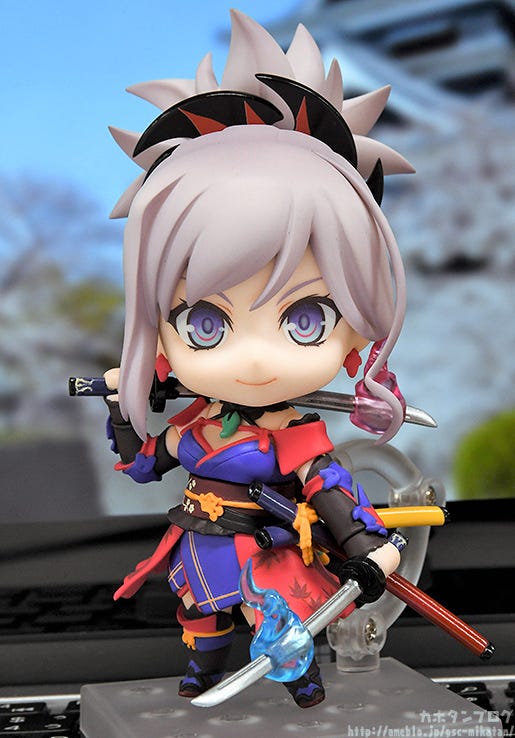 A pleasure to meet you everyone! My name is Takamii (@gsc_takamii) from GSC’s  planning department! Some of you may know me from the GSC Lab blog, but my love for FGO has led to me writing some FGO related blogs here on Kahotan blog as well!

Without further ado, today I’m going to be taking a look at… From the popular smartphone game “Fate/Grand Order” comes a Nendoroid of “Shinmen Musashi-no-Kami Fujiwara no Harunobubu” or as she is better known, Saber/Miyamoto Musashi! She comes with three face plates including a standard expression brimming with self-confidence, an ambitious combat expression as well as a kittenish expression for when she has her favorite food.

A selection of text and background plates allow you to recreate the famous scene from “”The Tournament of the Seven Blade-Master Heroic Spirits”” episode, and the parts can also be used in various other combinations to recreate various situations in Nendoroid size! Be sure to summon the female swordsman who travels to world into your Nendoroid collection!

“Let me show you the true essence of the Five Rings!”

At long last! Musashi-chan is joining the Nendoroids!

Available for summoning for the first time during the 2017 New Year Campaign, she played a large role in the FGO 1.5 “The Tournament of the Seven Blade-Master Heroic Spirits” episode and also featured in the 2.0 commercial! Now at long last she is also joining the Nendoroid series for everyone to enjoy by their side!!

Let’s get on with the review! ☆ The figure is sculpted based on her Stage 2 ascension, and you can see the intricate details of the flower pattern on her sash and the maple leaf pattern on the red part of her outfit! The figure also of course allows you to enjoy her appearance from the back! Something you don’t get to see very often in the game! The patterns and ambience of her traditional Japanese-style outfit have been captured beautifully!

In addition, her swords are included in both sheathed and drawn versions allowing for many different posing opportunities! Along with the face plate above, she also comes with this imposing shouting face plate for combat scenes! She is normally such a gentle soul, so the contrast between that and this expression is lovely! Effect parts that represent Fire and Water which can be attached to her swords are also included! The parts make use of a semi-transparent look that looks so pretty! They can also be removed to display her with just standard swords!

But that’s not all! She also comes with a selection of optional parts that bring back the famous scenes from the “The Tournament of the Seven Blade-Master Heroic Spirits” episode! ▲ Great fun to display with other Nendoroid servants! The episode really was one of the most awesome so far, which is why we included these plates to bring back the episode with the Nendoroid!!

Anyway, moving onto her third face plate… we have an adorable kittenish expression! Along with the expression we also have a bowl of her favorite food – Udon! You can even see the green onion on the top! She seems to be enjoying it so much that I kind of feel like going to have some udon now! Bonus Shot: Miyamoto Musashi sharing some of her udon!!

I can just imagine myself  feeling slightly embarrassed while still happily accepting as she looks at me with this cute expression… that will be the day that I achieve true “Emptiness”!

Anyway, getting on track… She will be up for preorder from tomorrow, the 21st May 2018!! Keep your eyes on the Good Smile Company website for more info!! ☆ Anyway, that’s all for today! Thanks for reading!! Speaking of udon… The Good Smile Seijin’s arms are udon!!
I can only imagine that if he was a servant he would be a Foreigner class.