May 17, 2018NendoroidBy Kahotan
Check out more figures at the
Good Smile Company website! 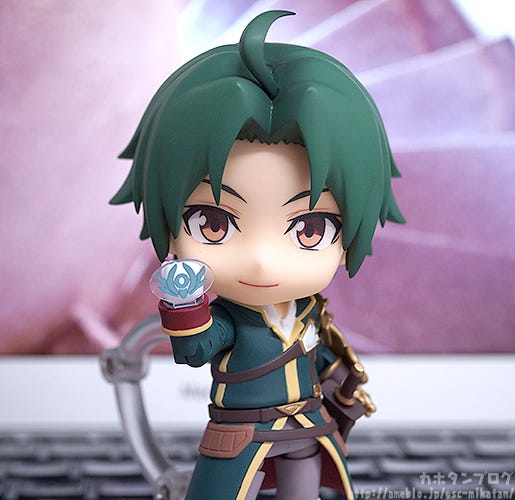 I think we’ve got to the point where I can be happy in short sleeves! Was it always this hot in May…?

Anyway, today I’m going to be taking a look at…
Nendoroid Theo Cornaro! From the anime series “Record of Grancrest War” comes a Nendoroid of the main character, Theo Cornaro! The Nendoroid is based on his appearance when he first started his journey, and he comes with two different face plates including a gentle smiling expression as well as a shouting expression for more intense scenes.

Optional parts include his sword in both a standard version and a glowing version, as well as his Crest. His arms are fully articulated allowing you to easily display him in various action poses.

The young lord who travels to save the village of Sistina.

From the anime series with it’s first Blu-ray & DVD releasing on the 30th May 2018, Record of Grancrest War, comes a Nendoroid of the main character that fights for the weak with a strong sense of justice, Theo Cornaro! His dark green hair has been carefully sculpted to preserve the unique “pointed” look  as faithfully as possible! The outfit he is wearing is based on when he first left on his journey, with even the shield on the left arm faithfully included in cute chibi size! (∩・∀・)∩ ▲ The matte white and the shiny gold!
All the different textures of his outfit have been incorporated beautifully!

One of the key elements of the story, the crest, is included as an optional part! It is included as a clear plate which can be inserted between the hand and arm parts to create this pose! (｀・ω・´)ゞ In addition, his sword also comes with parts which allow him to be display with the sword drawn, ready for battle – plus the blade comes in both a standard version and a glowing version allowing for various different situations! ♪ ▲The glowing effect is accomplished with translucent parts & a gradient color!

In addition, the Nendoroid features a ball joint in the elbow and upper arm allowing him to be placed in all sorts of different action poses! This can be used together with his shouting face plate to really recreate the tension of battle with the Nendoroid! ▲ A bent leg is also included for more dynamic poses!

The shouting face plate can also be used for more than just combat scenes! It also works great for bringing out a more dignified look for the young lord! All sorts of parts to pose Theo in various different poses! ( ･ㅂ･)و ̑̑

Be sure to add the young lord to your collection!
Nendoroid Theo Cornaro!

Keep your eyes on the Good Smile Company Official Site for more info!

We also have this items from Record of Grancrest War on the way! ヾ(o´∀｀o)ﾉ A scale figure of Siluca based on an original illustration by the author of the light novel! Stay tuned for more info!!

Preorders for many products at the GOODSMILE ONLINE SHOP are closing soon! Here are the products closing on the 17th May 2018 (JST)!