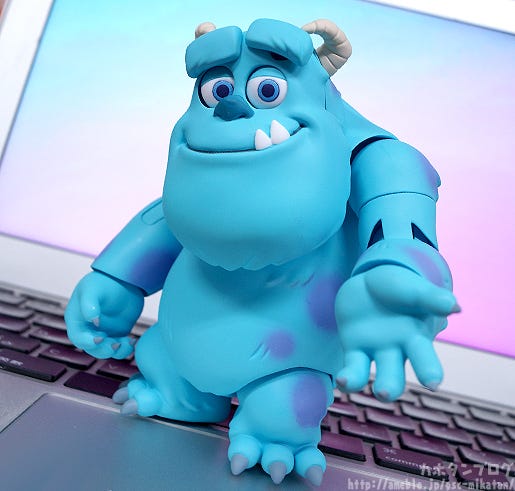 I recently went to Disney Land for the first time in ages…! It was so much fun!! In addition to the bonus face plates, the DX version also comes with a selection of optional parts including a clipboard with a door fragment attached to it as well as the door that he repaired to surprise Mike! Be sure to display him together with the upcoming Nendoroid Mike & Boo for even more fun!

Sulley’s big build and fluffy appearance have all been captured in cute “chibi” style, with the purple spots all over his blue fur faithfully included in the design! I know what you’re thinking! You think this isn’t really a Nendoroid, but the design principles and joints are all similar to other Nendoroids, so while the design itself is rather different to other characters in the series, he is still a great Nendoroid monster! The figure stands around 120mm in height, so it will look great displayed with other Nendoroids as well! (´□｀｡)

You don’t need to change the face plate or move the eyes at all to change his expression – simply changing the angles of his eyebrows makes for all sorts of possible situations!! ♪

But he also comes with three different face plates!

Along with the standard expression above, he also comes with… An scary expression to show off his top scaring skills!★

He has his mouth wide open showing his scary fangs, and you can move his eyes to look down as if he is towering above you to really capture the monstrous look!

You’ll also notice he has articulation on both his shoulders and his elbows allowing for all sorts of different posing opportunities! (っ’ω’)っ))

You can also change the eyebrows and arms like this… To display him being scared by a human child instead!

The moving eyebrows really allow for so many different expressions! ☆

His third face plate is a more sullen expression! ( ´>ω<`) In addition, he also comes with a clipboard together with the door fragment taped onto it! Last but not least, this part is also included! ▲ Parts that allow the door to stand up are also included! ☆

Nendoroid Mike & Boo is scheduled to go up for preorder on the 17th May, so you can easily grab them together for joint situations like this! Bring the excitement of the Monsters, Inc. universe into your collection! He is currently up for preorder! ☆

In addition, Sulley is also available in a cheaper version that only includes one face plate and eye set, as well as none of the optional parts! If you simply want a Sulley for your collection without all the additional posing options, be sure to take a look at Nendoroid Sulley: Standard Ver.!

Preorders for many products at the GOODSMILE ONLINE SHOP are closing soon! Here are the products closing on the
17th May 2018 (JST)!