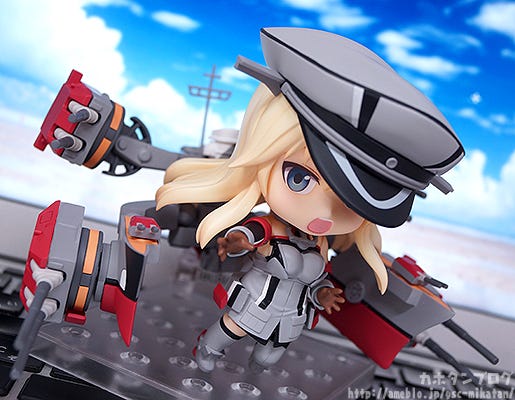 Kaho-tan here. ( @gsc_kahotan)  And I just got an insatiable craving for coarse grain mustard!

Like I could eat it spread on a slice of bread… Delicious!

Well, moving on – today we’ll be taking a look at From the popular browser game “Kantai Collection -KanColle-” comes a Nendoroid of the upgraded version of the nameship of the Bismarck-class battleships – Bismarck Kai! The figure is designed based on the “Kai” version, but also includes parts which allow you to partially recreate the “zwei” and “drei” versions of her as well!

The ship parts are articulated to be highly flexible when posing, allowing you to move all her fire power to one side or instead balance it out evenly! The legendary black cat that is also included to display by her side! Be sure to add the very first KanColle Nendoroid based on a German ship to your collection!

“Kantai Collection -KanColle-” will celebrate its 5th anniversary on April 23.  And just in time for the festivities, we present this cute little Nendoroid of the modified version of the prized German Bismarck series Super Dreadnaught name ship – Bismarck Kai!

And this even the large armaments have some articulation of their own! ヽ(*´∀｀)ノ Each turret and its platform can rotate, and the range of motion for each arm has been extended.★

▲Look how far the upper arm can fold inwards!

For that reason, the rigging has to be firmly affixed to her shoulders… You can even concentrate your firepower all on one side! (っ’ω’)っ)) Pair together with her battle expression for a relentless attack scene! ♪

And to make sure you can maneuver those huge armaments with ease, her long hair is outfitted with some joints as well! (｀・ω・´)ゞ We’ve also included a black cat – modeled after the legendary German cat who survived many a ship wreck!

It goes well with the embarrassed face – you can almost hear her protest being left behind! The biggest difference between the zwei and drei is the weapon in her hand and the topedo tubes on sides of the ship. Pair with your trusty torpedo tube effects and navy aircraft to behold this little lady’s gallant stance with abandon! ▲Both navy aircraft and effect parts come with their own stands.

So why not show some love for this first German lass to join the Nendoroid fleet?

Available for preorder from (Thu) 19th April at 12pm JST!

Check the Good Smile Company homepage around that time for product details.

All customers making their pre-order at the Goodsmile Online Shop will receive a Nendoroid Bismarck Kai Special Box Sleeve & Special Nendoroid Base & Clear Ocean Display Sheet as a special bonus.

▲The base measures a large 8cm×8cm, and the clear sheet is A4-size!

Keep that in mind when making your reservation!